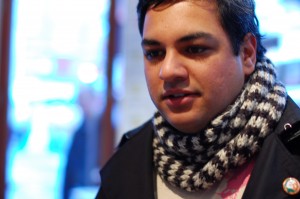 1) Tell me more about your novel? What’s it about?

It’s called Coconut Unlimited and it’s a semi-autobiographical look back at my time growing up in the London suburbs. I was inspired reading Colson Whitehead’s Sag Harbor and watching the Inbetweeners and wanted to write something heart-warming, not necessarily plot-heavy, just warm and funny and indicative of the time I grew up in because not much is written about that time, especially from my background. So Coconut Unlimited was born. Broadly, it’s about the only 3 Asian kids in a private school near Harrow who are all fiercely anti-Asian stereotypes that they’re branded coconuts and toffs by their brown peers and stereotypical Pakis by their white school friends. So to keep it real, they set up a hip hop band. But they’re all rubbish at rapping. It doesn’t matter, rap means more to their identity than bhangra and bud-bud ding-ding so they try their best but slowly get drawn into Harrow’s low level drug-dealing politics. It’s just a funny warm book about the self-delusions we operate under when we’re teenagers. It’s about how we define ourselves so strongly by what we like not what we’re like when we’re young and how that can get you in trouble.

2) What have you done so far to promote the book and get it published?

Well, I had an agent last year but for various reasons we’ve parted company. I’ve been looking for another agent so I’ve been sending it out to agents who represent authors I think I’m like. It’s important to try and match your manuscript to agents who understand the type of work you’re doing. No point sending your magical realism fiction to a world war non-fiction specialist. Also, gigging a lot helps as I mean editors and agents and people who like my work enough to spread the word, which means I’m not always cold-calling, which is hard as people tend to end up in the slush pile. I guess, I know my writing’s good but I have to be beyond just the book at the moment, which means a strong internet presence, blogging and tweeting and doing gigs and readings all help the profile. I’ve been doing short story podcasts too. Also, because the book’s about a band and a novelty one at that, I recorded a fake song for them to send out along with my manuscript. It adds to the idea of a ‘product.’

3) For those of us who follow your blog and your tweets will know your luck with literary agents. What’s the truth behind the tweets/blogs – what’s the best response you’ve had from an agent?

Well, I’ve had enough experience of agents and enough feedback from them to differentiate between the fob off, the genuine no (showing that they actually read it), compliments and things that are either vitriolic or rude or show a lack of understanding about Asian writing. And those are the things I write about on my blog and tweets and I know it’s wholly unprofessional and makes me look like I’ve got sour grapes. I guess, I feel that these people who are being rude bordering on prejudiced have so much say and sway in the industry that I’m taking the power back slightly by writing about their comments. It’s not everyone though and most agents I meet are considered, well-read and completely justified in their tastes and reasons. But there are the odd few who are just rude beyond the standard ‘template.’ And that irks me.

I’ve had amazing responses from people though. People are complimentary about my work and I feel like things are moving along slowly. The general positivity is what motivates me to keep pushing it along.

4) For those of not familiar with podcasts – tell us briefly what they are and how you’ve got involved with them?

Podcasts are like radio shows you download on to your preferred mp3 player of choice. I listen to a lot of them, from comedy to film and book review and politics stuff. While I was searching for short story podcasts and not having much luck, I came across The Moth, a series of true short stories recorded live at a New York night where writers tell their stories without notes. I really liked the idea of it and thought, why don’t I do a collection of short stories like that. All live, recorded in one take, warm and short- about 12-15 minutes long, and give em out for free, just as a promotional tool. These are short stories I’ve been working on in the last few years that lend themselves to the oral storytelling experiences, so I thought, why not. And it’s been great. The download response has been insane. I never knew stuff like this could spread as virally as it does, but it has. You can search for it on iTunes and everything. It’s called Wham! Bam! Stories, Man!

5) So what can a listener expect from one of your short story podcasts, and are all the stories linked?

My short stories are live, recorded in one take with the spirit of spontaneity, like I’m there with you reading it. Sometimes I stumble or make mistakes but that’s part of the charm. The Moth feels warm and alive because it’s live and the New Yorker podcast, much as it’s brilliant, is too polished for my style. The stories are my usual brand of humorous sideswipes at culture, family and situations, filled with stillness and pathos. There are some sweeter works like Friendly Toes, funny ones like Rap Tape or serious ones like At World’s End. They’re not linked except through the voices telling them is me!

6) You’ve clearly diversified as an artist, what keeps you motivated?

Well, if I didn’t do it, I wouldn’t be satisfied with a life not doing it, if that makes sense. I’m compelled to write and perform and so I have to do it. I’ve now also culled the weaker bits of my repertoire (I was too willing to try everything with varying degrees of success and skill) and now I know what I’m good at, I’m concentrating on it. And the response is electric. People really like my stuff and I’m saying something they want to hear so that’s my biggest motivation: I’m starting to gain an audience for the things I want to write about and that makes it all worth it.

7) Tell me more about your latest venture, the micro-fiction nights?

I am planning a series of nights called Wham! Ba! Story Slam! At the Free Word centre in Farringdon, a big conglomeration of literary charities and organisations. The first one we did featured Evie Wyld, Niven Govinden, Nicholas Hogg, Salena Godden, Stuart Evers and Gavin James Bower and was insane. Everyone had 15 minutes and they all rocked it. I felt a bit rock n roll. There are plans to do more but you’ll have to keep an eye out on my blog for details. We’re hoping to get it so there’s an open mic segment too.

8 ) A novel, short story podcasts, and micro-fiction nights – what have you got planned for 2010?

I’m writing a poetry show too, called Nik and Nick but it’s in early stages at the moment so I can’t tell you much about it except that it’s about a certain ethnic poet/author and a certain BNP leader and I’m hoping to take it to Edinburgh. But that’s it. I’ll be concentrating on refining Coconut Unlimited. The short story run will be 10 short stories and the microfiction night will hopefully grow soon. I’ll also being doing more stuff with the amazing Salena Godden at her Book Club Boutique night over the course of the year. There’s always stuff happening. Check the blog.

9 ) You’ve come into your own as an artist now, looking back what do you wish you’d known then – that you know now ?

Be good at the things you’re good at and concentrate on one thing and do it well. A really close friend of mine despairs sometimes at the amount of things I throw myself into and how this means they won’t be as finished as refined as they could be but I’m learning. I’m taking on less projects, I’m concentrating on writing over music and I’m getting it done by concentrating on one thing and I love it. I wish I’d known this in 2001 when I was writing a collection of poetry and someone said… you should rap those over beats…

10) If a fairy godmother granted you three wishes – what would you wish for and why?

Hmmm, how many of this am I allowed to be selfish about and how many for the good of the people? How about I do one selfish one and two worldly ones.

Wish #1: I wish my book Coconut Unlimited finds a home that understands it, loves it and nurtures it. I’ll take it from there fairy godmother, just get me started.
Wish #2: I wish that the wars in Iraq and Afghanistan are ended as swiftly as humanly possible.
Wish #3: I wish that my granddad gets to see Kenya again before he dies, to see where he grew up and raised four amazing children.

Nikesh Shukla/Yam Boy is an author, film-maker and poet caught between the cityscapes of Mumbai and the low-swinging chariots of London. His writing has been featured on BBC2, Radio 1 and 4, Resonance fm and BBC Asian Network. He has been published in Tell Tales, Litro, Bad Idea and Transmission Magazine. He has performed at Royal Festival Hall, Apples and Snakes, Soho Theatre, The Big Chill, Rise Festival, The London Mela and Glastonbury. He has travelled to America Europe India and Africa to perform and read his words. In 2008, he was commissioned to make a short film, The Great Identity Swindle, as part of motiroti’s 60 x 60 film experiment. This sixty second short film, based on a poem, won best short film at 2009 Satyajit Ray Foundation award and at the 2008
international Asian First Films Festival.

In 2008, he released the antifolk album, ‘Kidologies and Amazing Fantasies’ which is available to purchase here as well as iTunes. He is working on his first book, ‘Coconut Unlimited.’ In 2009, Nikesh put out a series of short stories as free downloadable podcasts from iTunes and Podomatic entitled ‘Wham! Bam! Stories, Man.’