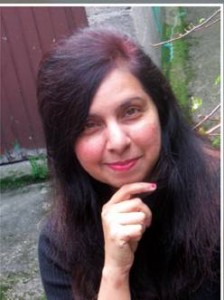 Could you please tell us a bit about yourself and how you got into writing?

I am a writer one way or the other. I worked as a magazine journalist under Singapore editors, in Kuala Lumpur, Malaysia for several years in the Nineties before I gave up mainstream life to travel to obscure places. I survived this splendid madness and have savoured my freedom ever since. I have spent long periods in Melbourne, Australia and London. I travelled on my own with no prior bookings  to places like Jordan, Tonga, Fiji and Zanzibar. I have been writing since I was a little girl, thanks to the encouragement of memorable English teachers and my affectionate classmates in the Convent of the Holy Infant Jesus, Klang. I wrote dozens of romantic odes for all of their crushes. Writing was second nature to reading.
I was born into into a household of bookshelves owned by my father. He taught me the love of picture books at a very young age.  My mother is Sikh and my father, Malayalee.  He had arrived from Kerala, South India to teach in Malaysia. He met and married my mother, also a teacher in a little town in Kampar. As a tot, we lived in Singapore but returned to Klang, Malaysia when I was four. At the time, many Malayalee families whose older parents had emigrated to Malaysia and Singapore, carted their classics and library collections all the way to the Far East. They were passionate readers, my father was no different and so, I too read and subsequently wrote little poems and essays.

Through your first book you open a door into your world – thoughts and observations – do you ever feel like you’ve exposed yourself when writing?

Yes, I do. Call the Ships of Dar-es-Salaam is a book of lyrical writing on Dublin, Dar es Salaam and Malaysia. The material sets itself out bravely, shaping poetry, diary snippets and the odd reflection, weaving up a careful erratic pattern for a stage of absurdities. This akin, to someone striding out, on a smooth but jagged pavement.  Like the reader, the walker may not know what’s coming with the exception that the pace and rhythm, of both poetry and pavement, although lacking a standard form of singular symmetry, is unlikely to trip anyone up. In my case, although the imagery may be blissfully exaggerated and considered fanciful, the time, place, episodes and inspirations that acted as a band of eager Muses for the writings, are all real.  As such, I am often terribly embarassed, sometimes bashful when someone says they have read my work and then proceed to study me with a keen eye. I become tongue-tied in conversation and spirit, more from an unexpected shyness than anything. Some are tickled and I relate to their humour far more easily, like a snug, warm coat for my dignity.

What is your favourite piece in the collection?

I love them all. Each piece hoards a vivid memory. But I am particularly fond of In the Blue, which sketched a scene of a lady who got wet in the rain while waiting for her man and of how, she used her time of silence and her damp skin, to conjure up visions and poeticise her experience for a pronounced romanticism. Thus, she became the sparkling person for it.  I stay enamoured by the subtle sensuality of that piece.

The collection is filled with hope and optimism but also reveals someone who can escape quite blissfully in the little details of life – do you often find yourself living in a world which is very different to those around you?

I do live differently in real life.  I don’t adhere to the mainstream expectations of structured routine.   I am a free spirit and live the life of an artist. I travel spontanously. But I am also a realist and  betray the dreamlike state of my own  writing.  My orientation for solitary travel was Africa, a surreal but dangerous region. It is not uncommon in Tanzania or Zimbabwe – although both nations own sophisticated cities, to come across people with broken limbs , the occasional corpse, robbers, murderers and conmen as close to your doorstep as could be imagined… There is always an undercurrent of potential savage brutality, that may lurk for the foreigner, especially if a traveller heads out into the rural parts, with no adequate preparations beforehand.  So  there is a part of me that stays alert, ruthless and watchful. I become attuned to these traits, subconsciously.  As a result, escapism remains the rare luxury. At the same time, on writing pastoral prose in Dar, an ancient port city, in Tanzania, my inspiration comes from everyday scenes and instant imagery, spun from a vibrant imagination. But this happens with a swift, trained eye and not  in a lingering Wordsworth fashion.

There’s been a great deal of adventures and cultures spoken of in these works – what or who has had the most influence on your writing?

With ‘adventures and cultures’, at first, it was my Daddy with his nomadic inclinations and thrilling stacks of Life, National Geographic and Reader’s Digest magazines.  Later, there were  storybooks of unusual tales from faraway shores like Hong Kong or the Artic.  Now, it is world literature and cinema that prods me on to travel to obscure places anew, with such fervour, I feel that I will burst with the exhilaration of it all. These things influenced my love for the subjects I write about. But it is my lifelong passion for contemporary British fiction and the classics, that honed the form and structure of my writing.

Tell us a bit more about the YouWriteOn publishing experience and how you discovered it.

Well, I first heard of Edward Smith of YouWriteOn in a rather strange fashion when YouWriteOn was funded by  the Arts Council in Britain and Smith had attempted an ambitious plan of publishing a a certain number of books in record time. The Guardian wrote about it and I read it there.  Very few believed that Smith would survive the publishing industry, with his innovative brand of independent publishing and controversial ambitions. But survive he did. He is an excellent businessman. Last year, YouWriteOn organised a publishing round with far fewer numbers and I wrote in. They agreed to publish me then but I later, changed my mind. I had been mostly travelling and only recently made a comeback to creative writing. A few months ago, I received an email from Smith again…he was going to publish a few more books in the autumn.  He originally selected another work of fiction, but I was keen to have my shorter pieces, find their place in the sun.  I wrote to Edward Smith again and asked if he would consider my poetry as well.  It took awhile but he said yes.  I found working with YouWriteOn to be nothing short of an enjoyable, professional experience.  It was a learning curve but Smith did go out of the way for my manuscript and was extremely patient with my initial carelessness.  At present, he’s waived the original deadline for my first work of fiction.  I wanted to tie up loose ends and add on new material.  He seems all right with that.
This is a print-on-demand venture and the books have been beautifully produced by Lightning Source, one of Britain’s current top printers who also do other poetry presses.  I’m astounded by the listings of international online distributors so far, even reaching countries like India, Japan, South Africa and Australia. Otherwise, Call the Ships of Dar-es-Salaam, would be mostly found in the European and American markets.

What have you learnt about yourself through the process of writing?

I have learnt to cherish optimism in a lateral sense and bow to the sacredness of life. I have inherited a sound love for nature and all of its quirky foibles especially woodland scenes and seascapes. I have learnt how to capsule myself with an enormous intangible beauty at a moment’s notice. My soul has turned wonderfully intuitive. I have defined my personality with sharper clarity.To reach Mount Kilimanjaro’s Uhuru Peak early in the year and collect my mountaineering certificate. I have scaled the summit of the Kilimanjaro two times but could not reach the peak, from a severe ankle injury. Also, to take my writing more seriously and to publish literature on exotic cultures. To conduct a personal literary journey in Egypt on the life of Naguib Mahfaouz, one of my celebrated literary heroes, who would have gladly turned centenarian in 2011, had he lived.

Finally, what are your New Year’s Resolutions?

Susan Abraham is a Malaysian-Indian writer, currently based in Dublin, Ireland. She is also a mountaineer and adventurer on the East African trails. She has worked as a copywriter for international advertising agency, AP: Foote, Cone & Belding in Kuala Lumpur and also as a fashion/feature journalist with Female Magazine Singapore/Kuala Lumpur.  Susan Abraham has had some poetry published in poetry presses in England eg. Rupert Loydell’s Stride and Ian Brocklebank’s Issue One. She later gave up her career to travel and has only recently made a comeback to creative writing. Her first book of lyrical writing, Call the Ships of Dar-es-Salaam, was chosen for publication in an autumn publishing round by YouWriteOn UK. At the same time, two of her poems were picked by The Guardian London, for publication in its first poster poets’ anthology.  Susan Abraham blogs on books at
http://www.susanabraham-booksblog.typepad.com/