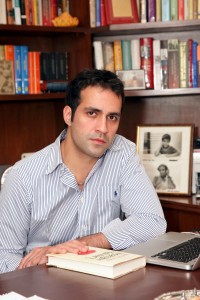 Q. When and why did you decide to become a writer?

I have a vocation. It was there in some form or the other for as long as I can remember. What I lacked was self-assurance; and there was initially a lot of pressure to pick a more secure career than writing. But eventually all of that fell away before the realisation that if I could get going as a writer, there was nothing I wanted to do more. I realised this while trying to write my first (and failed) novel in New York in 2003.

My relationship with my now late father formed an important part of my first book. At the time I wrote the book, he was a businessman who hadn’t been in politics for nearly fifteen years. By the time the book was published, he was governor of Punjab. Eighteen months later, he was dead, assassinated by his own guard. I did not wish for these circumstances; but now that they are there, I can’t wish them away either. They are simply a part of my life. I must accept that, accept, too, that they will encroach upon my creative life. I cannot know what impact they have on a reader’s mind.

Q. Who do you write for, yourself or others?

For others. To be published, to be appreciated and criticised, to be read widely. Writing is a public act. It is another kind of writer who writes for himself; and frankly, not one whose motivations I understand.

Q. VS Naipaul touted you as a “young writer to watch.” Has that helped or hindered the creative process?

It was very kind of him to say that; I consider him a very important writer. But no, to answer your question: that is not the sort of thing that can have any impact on the creative process.

Q. Could you tell us more about your first novel, The Temple-Goers? What inspired you to write this story?

I wrote it as a reaction to a very powerful feeling of fear and euphoria at returning to India. I was surrounded suddenly by new kinds of people, people who could not have existed in the India I grew up in. I wanted to write a novel about a man who had been thrown up by the change. I also wanted to write about Delhi, a city I knew intimately, but whose boundaries were being rapidly redrawn.

Q. How did the writing experience of writing your first novel differ from writing journalism for which you are better known?

The source of the material is different, but the process—once the narrative has come—is the same. The difference is that a fictional world is enclosed, and must offer its own logic and motivations. For non-fiction, one can depend on the rationale of the outside world.

Q. With your forthcoming novel being published this summer, you’ll have had three books published in three years. How have you achieved this quick turnaround of good writing and what keeps you going?

I think that once a writer begins to find his way—there is a backlog of material which forces its way out with unusual speed and urgency. But this cannot last for the entire length of his career. And I am well prepared for a change of pace; I feel already, after these first three books, which form a trilogy of a kind, that I am at the end of a vein.

Q. Much like your first novel, your latest, Noon, revisits the relationship between father and son and more importantly a son’s personal journey to understand his father. Is it semi-autoiographical and did you write it before or after your father’s assassination?

I wrote it before my father’s assassination. And no, though it has a basis in lived experience, it is not autobiographical. Father and son relationships, however, do form an important part of my material. I am interested in power relationships, and how they encroach upon the freedoms of the individual. This theme runs right through Noon.

Q. What do you make of the literary scene here in London – how does it differ to India?

I don’t know about either scene, but I can tell you that the literary world here has an infrastructure that is missing in India. The reviews, the book shows, the radio programs have real reach; they mean something; there are people listening and reading on the other end. This is not true of India. The channels by which books make their way are not yet in place in India.

Q. What’s next on the horizon for you as a writer?

Something historical, though I can’t say what. I’ve been a bit derailed for the past four months. I’ve hardly been able to read, let alone write. Strangely, the only thing that I have been able to read lately are the later plays of Shakespeare: Corialanus, Timon of Athens, the Tempest again and again.

Q. Finally, what advice would you give to aspiring writers?

Beware any system of writing. And never forget that intellectual life is full of dangers to your writing voice, especially if that voice is original. Set at least ten years aside for rejection and disappointment.

Aatish Taseer was born in 1980, to a Sikh Indian mother and Muslim Pakistani father. He has worked as a reporter for Time Magazine and has written for the Sunday Times, Prospect and India Today. He has also written a travel memoir, Stranger to History: a Son’s Journey through Islamic Lands (2009), an investigation into his troubled family history and estranged father. He lives in London and Delhi.