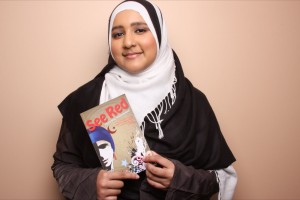 Urbantopia Books is dedicated to publishing culturally and socially diverse books. Our aim is to publish exciting tales written by individuals from different Ethnic backgrounds and close that gap in the book market.

After completing my first novel, I began the search for a suitable publisher. I read many books about picking the right publisher or literacy agent, and all the articles said the same thing. “Find a publisher that publishes similar material”.

Q. What is the focus of your company and how does it differentiate to other independents?

Our focus is to publish very ‘urban’ books. Books with real voices . Voices that many inner city readers in the UK can relate to. We want to publish books that educates others about different cultures in the modern day life.  We are very different to other independents because we have a big focus on producing books for teenagers.

A friend of mine (her uncle) sent me her winning piece from the Young muslim writers awards. I read it and loved the voice of the author and the content.  I met Mina and asked if she would be interested in extending her piece into a novel. She was very excited but also worried that she wouldn’t be able to commit to writing a novel and doing school work.

Q. And what were your first impressions when you read the manuscript through?

I thought it was a great read. It was funny and young, the kind of book I would have enjoyed reading as a teen.

Q. What did the process involve of getting the book from pitch to publication?

Mina had to write a proposal. She wrote a four page synopsis on what was going to happen in her story. She was then given deadline for when the first draft needed to be completed. Upon completing her second draft , it was forwarded on to a proof reader who read through the whole text to ensure it was error free and that it read well.

Q. And finally what has it been like working with a young and emerging talent?

It has been a great experience to be part of Mina’s writing career. Mina is a very talented young lady. She is hard working and committed and she is a source of inspiration young people who want to get into writing.

Working with Mina has allowed me spread the words ‘ You can do it too.’

My name’s Mina — I’m a Year Ten student at Sarah Bonnell School in Stratford. I’m Muslim, Bangladeshi and a bit of a feminist. I love reading and writing and I think the power of spoken and written word is so, so important, especially in this day and age. I have very good taste when it comes to books, poetry, films and music (even if I do say so myself!) and I myself am a writer and poetess. (That said, I can’t sing or act to save my life.)

My book, See Red, is about a thirteen-year-old Palestinian-Egyptian Muslim girl called Jenna Kamal. She’s just been kicked out of her Islamic boarding school and struggles to fit in with the girls in her new school in Newham, making a few enemies along the way. Meanwhile, at home, things aren’t any better — her dad has gone to Egypt to visit his dying father, leaving Jenna, her pregnant mum and her sister to fend for themselves. With all these problems going on in her life, Jenna tries to find herself, rebelling against everything she believes in to find out who she really is as she battles through her identity crisis. But then a potentially life-changing event pushes Jenna to turn to her faith, and this helps her realise who she really is, and who her enemies aren’t.

A lot of people inspired me to write this book. JK Rowling, Jacqueline Wilson, Patricia Cornwell, Dennis Lehane, Malorie Blackman — all of these “big” authors are known and renowned, internationally, for their much valued contribution to literature. It occurred to me, one day, that I wanted to do the same. I wanted my words to make people think and question the world around us today, just like so many books do to me. The most important motivation for me, however, was God’s very own word: the first verse of the Qur’an to be revealed to Prophet Muhammad (peace be upon him). This verse begins with the word, “Read”. I, as an author and as a Muslim, have taken this word — God’s word — to heart.

By writing my novel, I intended to change society’s perception of minorities — specifically, Muslims — and to make other people acknowledge that yes, Muslims have always made a valued contribution to society and that society should recognise this. As well as that, while I know I’m not the first teenager to publish a novel, I do know that I am the first British Muslim to do so, and I do hope that in the future, there will be more teenage authors from all cultural backgrounds and religions.

When I think about it, how See Red was published wasn’t the usual way a book is published. Normally, you’d have to write and novel and either send it to a publishing house or sent it to an agent, who would then get it to a publishing company. But for me, it was very different. See Red started off as a short story, titled Colour Coded, entered into the Young Muslim Writers Awards 2010. I had just found out my story had got shortlisted for the Best Short Story award, so, naturally, my parents told the family.

Upon finding out, my uncle immediately phoned me up and told me that he had a friend who was looking for writers for her new publishing company called Urbantopia, which catered specifically for writers from ethnic minority backgrounds. My uncle forwarded my entry to her (Ola) and from there, she asked me to write a novel based on the story. This was around May 2010. I started writing the novel in June 2010 and I was finished by October 2010, before my fifteenth birthday. I am very grateful to my uncle for having such great connections, because if it wasn’t for him, I wouldn’t have met Ola and got my first novel published by her!

It was lovely working with Ola; she’s very nice and easy to work with. I admire her for all she does: being a publisher, writer, teacher and mother can’t be easy, but she seems to pull it off very well! Admittedly, I’ve had to do my fair amount of juggling as well, albeit with smaller commitments; exams, coursework, fasting and moving house were all things which got in the way while writing See Red. Nevertheless, being published by Urbantopia has been an exciting and novel experience (no pun intended) and I thoroughly enjoyed the entire process of it.