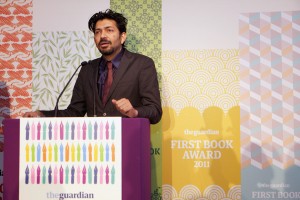 Siddhartha Mukherjee was named the winner of the 2011 Guardian First Book Award at a ceremony in London. (December 1, 2011)

His book, The Emperor of All Maladies – published by Fourth Estate – was the only non-fiction title on the shortlist, and has been described by its author as a biography of cancer, “an attempt to enter the mind of this immortal illness, to understand its personality, to demystify its behaviour”. The book also enters the minds of cancer patients, interweaving personal stories of struggles to survive with the science and politics of cancer research.

The Guardian First Book Award recognises the finest new authors who have had their first book published in English in the last year. As winner, Siddhartha receives a £10,000 prize plus an advertising package in the Guardian and the Observer.

Siddhartha Mukherjee, an American oncologist and award-winning science writer, said: “It is a great and distinct honor to be selected for this award. In recognising The Emperor of All Maladies, the judges have also recognised the extraordinary courage and resilience of the men and women who struggle with illness, and the men and women who struggle to treat illnesses. I am delighted and honoured to join a formidable list of writers and scholars – Zadie Smith, Alexandra Harris, Petina Gappah, Alex Ross among them. Thank you.”

Author and academic Sarah Churchwell, who was on the judging panel, said: “The Emperor of All Maladies is a cultural history of cancer and its treatment, from its first identification as a disease in the ancient world to 21st century research into its cellular genesis and treatment.

“Siddhartha Mukherjee has marshalled an immense amount of material into a readable and inspiring story. The result is a gripping, enlightening read about the nature of illness and our battle against what begins to look like mortality itself.”

Siddhartha Mukherjee
Siddhartha Mukherjee is a cancer physician and researcher. His book The Emperor of All Maladies: A Biography of Cancer won the 2011 Pulitzer Prize in general non-fiction. Mukherjee is an assistant professor of medicine at Columbia University and a staff cancer physician at Columbia University Medical Center. A Rhodes scholar, he graduated from Stanford University, University of Oxford, Harvard Medical School. He has published articles in Nature, The New England Journal of Medicine, The New York Times, and The New Republic. He lives in New York with his wife and daughters.