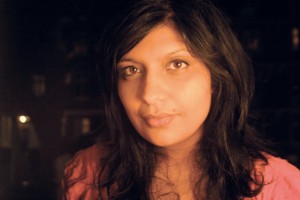 Q. Tell me about your latest book, The Village.

A BBC film crew visit an open ‘prison village’ in India, where the inmates ( all in for homicide)  live with their families  and come and go as they please.

Q.  Ray’s quite afraid of saying or doing the wrong thing. I think she’s the bravest person in the book even though at times she appears quite fragile and struggles with a lot of things (her relationships with her crew and how she’s perceived inside the prison – as a pardesi.) For most of the novel, she’s stuck. Where did she come from? Is there a bit of you in her?

I’m sure there is quite a bit of me in her and also in some of the other characters. As a writer you’re not always aware of the way in which you offload your own obsessions and characteristics in a novel.  She’s an odd shape, as you’ve identified, and looking for a way to fit. She has a particular filter on IndiaI suppose, an ‘outsider’ who thinks she is an ‘insider’.

Q. What do you think it would take to be accepted as “one of their own” rather than a foreigner – both in the book and in real life.

If I knew the answer to this, I probably wouldn’t have to write fiction ! This netherland of ‘belonging’ is something I am always trying to explore when I write, I’ve realised.

Q. What was your experience of life in an open prison in India? Are some of these experiences and people you met the inspiration behind The Village?

I visited a very inspiring open prison in Rajasthan around a decade ago, and it captured my imagination in a way that has been difficult to shake, I returned there a few years ago. Geographically and conceptually, these visits have definitely provided the landscape of this novel. I was most intrigued by the fact that the recidivism rates are so low , even though most of the inmates there have killed someone. Likewise, the number of escapes in over thirty years are just a handful. They live in huts they have built themselves, work in the local markets, and send their children to the school in the local town – all of this infrastructure made its way into the book, and then the characters started to emerge as I wrote.
Honestly, I thought the answer to this was a straight no – I never felt scared in the obvious sense because I wanted to write something that was quite different from Gifted. During the years of writing it, though, I did go through periods of block, and when I recovered from them and was writing well, I realised that the fear was of a different kind entirely. I had this great story I wanted to tell, this large cast of characters, and these themes that I wanted to weave together, something I wanted to understand. The fear was of not being up to the task. Only in the continual writing and rewriting of it, did I overcome that particular form of self conscious throttling. By the end I was so happy with the book, it was almost as if the dark times had never existed. What a perverse profession it is eh?

Q. Also, when we first met (in Newcastle at the SAMA 2008) you were a new mum and you’d written Gifted before your daughter was born. What is it like juggling motherhood and actually sitting down to write – closing off those intense moments you have with your child and trying to focus on the story?

Yes there is definitely an ongoing journey regarding accessing the private space that leads to creativity. Every time you think you have it nailed, something comes along to turn your world upside down and you have to start again. Being flexible, and losing the desire to control everything has been the answer. Then the discipline comes, for me at any rate.

Q. Your writing style is quite distinct. It is clever without being complicated and that makes The Village such an enjoyable and accessible read. Who would you say has had the most influence on your work?

It is a great compliment to hear that it is distinct. That, I suppose, is what most writers would hope for – to write in  way that means they say something idiosyncratic. Thank you. I find it difficult to know who has influenced me as I am reading a hotch potch of material at any one time, but for this book I’d say it was probably James Salter, J M Coetzee, Doris Lessing, VS Naipaul.

Q. Away from writing I know you’re involved in charity. What have you been doing since we last spoke (which was many many years ago!) and how do your incorporate your creative mind into the campaigns you’re involved in?

I’ve been involved with the Dalit Foundation www.dalitfoundation.org/ and I sit on the policy council for Liberty www.liberty-human-rights.org.uk/.
I try to write on issues that interest me for the papers sometimes too. In terms of creativity, it is a question of immersing and not thinking too much about what I can contribute, just trying to articulate the issues as clearly as possible.

Q. What are your writing plans for the rest of the year? Are you working on your next book?

Yes I’ve begun the next novel. It is shrouded in secrecy, obviously. For that, read, I am still trying to work out what kind of beast it will be.

Q. What’s the best advice you’ve been given that you’d pass on to an aspiring writer?

The best piece of advice – well, the best place to find it, for me, have been in the Paris Review Interviews. All the writers pretty much say the same thing. If you want to write, read first. Read as much as you can. Then let yourself write and edit what you write with that reader’s eye.

Nikita Lalwani was born in Rajasthan, India and raised in Wales. She is the author of two novels: ‘The Village’ to be published by Viking in June 2012, and ‘Gifted’ which was longlisted for the Man Booker prize in 2007, shortlisted for the Costa Prize and Sunday Times Young Writer of the year, winning the Desmond Elliot Award in 2008. Gifted has been published in 16 different languages and was adapted as a BBC Radio 4 Drama which won a Mental Health Media Award in 2009. Lalwani is a tutor on the MA in Creative Writing at Goldsmiths University in London and also on the MA at Oxford University. She has written for the Guardian and New Statesman, and contributed an essay to the non-fiction anthology AIDS SUTRA, published by Random House in 2009, exploring the human stories around the HIV epidemic in India. Discover more at http://www.nikitalalwani.com/