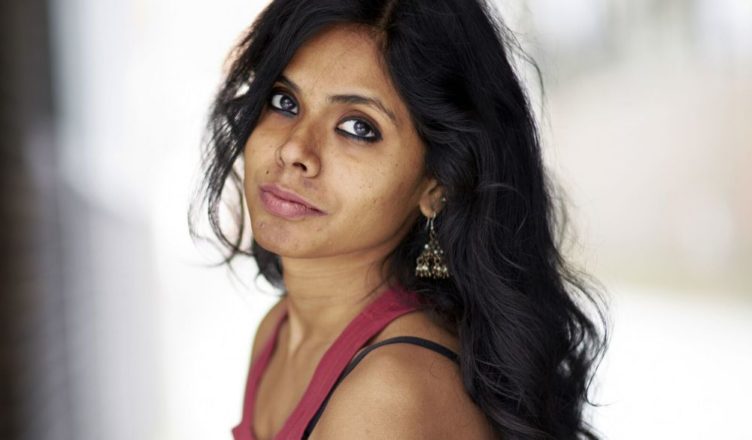 In her breath-taking new novel, Exquisite Cadavers Meena Kandasamy raises the curtain and invites the reader into what is often seen as a mysterious process. Sitting neatly in the margins Kandasamy dissects her creative process revealing how her ideas are worked into fiction.

I begin by asking Kandasamy whether writing Exquisite Cadavers made her feel exposed.

“There’s a couple of ways of thinking about it,” she says. “I think one of the ways is that art is highly glamourised as a profession… it remains this really mystical thing and on the other hand, when you’re doing it, it’s really hard work. It’s really about making the right choices.

“A lot of my work is about knocking off the Fourth wall so to let the reader behind the scene to see what’s happening and where it’s coming from. I think the transparency helps in a way.”

It’s clear to me that she’s thought about this at great length and continues by explaining how much of her work has left her exposed, right from the very beginning.

“You’re exposed for the sheer reason of who you are as a political person. So, if you stand up in a country that is highly caste-ist and say ‘I’m anti-caste and come from this kind of a background.’ Or if you’re writing literature in a culture where only people who go to Oxford or Cambridge or the top universities are writing literature and you say, ‘My grandmother couldn’t spell her name, or she couldn’t write any alphabet in any language whatsoever,’ you’re already making yourself extremely vulnerable.“

While the publishing industry has made concerted efforts to address the lack of diversity, voices such as Kandasamy’s are rare. How then can those of us on the fringes exist in such spaces and find their way?

“I don’t think we should be ashamed of who we really are or where we come from,” Kandasamy continues, “because what matters is what we are doing with what we have.”

And Kandasamy is a perfect example of doing all you can with what you have. As well as writing novels, her twitter following, shy of a hundred thousand, is a space she uses to give voice to the voiceless. I ask her whether the act of writing can ever be separated from her politics.

“No, not for me because I think if we lived in a happier world or more equal world there are other passions I would pursue. I would cook or make beautiful clothes, I don’t know. There are lots of things I really love and I wouldn’t have this anger.”

She pauses for a moment and then admits that maybe she would write after all, even if it is only as a chronicle of beauty. She trails off, before returning to her point that “beauty is a reason that we rage against the system.”

This concern with beauty doesn’t surprise me. She started her career by writing poetry and had published two collections before turning her hand to novels. Her latter works have hallmarks of early influences – the works of Kamala Das and Arundhati Roy – and her writing style is equally raw and unapologetic as it is lyrical, often sitting at the intersections of style and form.

She cites the work of Maggie Nelson and Claudia Rankine as examples of writers who have been received this way.

She is, of course, speaking from lived experience too. Following the publication of her second novel, When I Hit You – a raw and gripping account of domestic abuse which was shortlisted for the Women’s Prize – Kandasamy felt that she was heard but not listened to. Critics insisted she’d written a memoir, she insisted it was a novel.

She wrote her latest work Exquisite Cadavers as a response.

However, rather than write merely as an affront to her critics, Kandasamy says she approached the work as an artistic challenge. The experiment allowed her to learn more about herself and interrogate the creative decisions she made along the way.

“Even in the fiction you inhabit, there’s a certain alchemy in the process of taking real life and trying to project it on to another space and creating something for the reader to read and take away.”

The result is carefully judged and well-balanced as readers are taken on a journey through the lives of Maya and Karim, an artistic couple navigating life in London. The reviews for Exquisite Cadavers have been glowing. The FT says its ‘profoundly thought’, while the Guardian have described it as a  ‘fascinating experiment.’

While Kandasamy isn’t celebrating just yet she must be delighted that her work is being received exactly how she hoped it would be.

Meena Kandasamy is a poet, fiction writer, translator and activist who was born in Chennai, Tamil Nadu, India. She has published two collections of poetry, Touch (2006) and Ms. Militancy (2010), as well as critically acclaimed novels, Gypsy Goddess and When I Hit You (2017). She currently lives in East London.