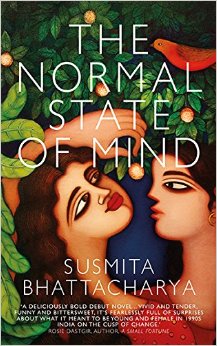 Susmita Bhattacharya’s debut, The Normal State of Mind tells the story of love and friendship.
The law seems to be very interested in widows and lesbians. Both are hanging on to the edges of society, begging to be recognised…
It’s the end of a millennium. India has made tremendous progress in science and technology, but in these times of economic boom can a friendship between two women give them the power to defy society, and law, to reach for their dreams?
Dipali, a young bride, is determined to make her marriage a success story. But her plans are cut short when her husband is killed by a bomb blast in Mumbai. Forced into a life of widowhood, her brother expects her to sacrifice her own independence for the sake of caring for her elderly mother but Dipali has other ideas.
Moushumi, a school teacher, discovers that her attraction to women is not just a girl crush. As her parents discuss potential husbands, Moushumi escapes to her high-flying lover. But how long can she keep being a lesbian secret beyond the safe walls of glamorous art crowd parties?