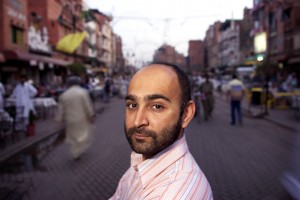 Author of The Reluctant Fundamentalist (2007), longlisted for this year’s Man Booker Prize, and Moth Smoke (2000), Mohsin Hamid spoke to us exclusively about his journey as a writer and the art of writing.

Your last two novels took seven years to write. What keeps you motivated to keep writing?

For me it’s a couple of different things. One is the hope that I will finish this thing and have some love at the end of it and the other thing is this desperate need – I wouldn’t know what to do if I wasn’t writing this stuff. It keeps me sane. There has never been a choice but that I have to keep writing. So when seven years ago I was in the novel writing process, certainly there are times where you’re in despair and you thing ‘Oh my God, is this going to get anywhere?’ and you go through all of that, but I think the fact that I had to do it in the end and I kept remembering what my goal for the project was.

I understand you’ve had other jobs while writing, is that true?

Thank goodness ‘cause otherwise if you spend seven years on a book and you don’t do anything else you’d starve to death – so I’ve worked throughout my writing career. My first novel I began writing in 1993 I was a law student for a while, then I worked in consultancy firm in New York for a while till 2000. Since 2000-2007 while I was writing my second book I worked as a brand consultant in London, then as a management consultant in New York and as a freelance journalist in Pakistan and a full time writer.

Its more now that I find my best writing is first thing in the morning before I check my emails, before I open the newspaper before I do anything to distract myself. Its first thing in the morning that I’m my most productive. So my writing ritual really is to get up and to open my laptop literally in bed and to write for as long as I can which is usually three hours maybe, that would be a good writing day for me.

What is your source of inspiration?

It’s a combination of things you’re always thinking about things, travelling, meeting people it provokes thoughts and also I read a lot of books and I think reading other writers, not just writers, other works of art, so music that I like, films that I like inspire me. And then I have a few good friends who are writers. Having a community of writers where they are published or not, in my case all my friends are all now published but when we started we weren’t, I think that community of people really does keep you inspired and keeps you working through the difficult times.

Do you ever suffer from Writer’s Block?

Everyday I suppose, I mean there is no such thing as writer’s block. There are just times when you’re writing well and there are times when you’re writing badly. For me when I’m writing badly I don’t stop writing so I wouldn’t call it writer’s block, its just not useful writing that I’m producing. Writing is a relationship just like when you’re in a relationship it goes through difficult times and really good times and I think we should all expect it.

Do you ever feel inadequate reading other writers work?

I guess totally yes, you think ‘oh my God this is so good.’ And maybe you do feel a flair of envy and jealousy but you also feel a sense of appreciation. Writers are also readers and when I’m reading, I do wish I could write like that but I wouldn’t call it an inadequacy. My goal is not to out write the other many writers in the world my goal is to write something I myself think is amazing and in that sense inadequacy is more about how far you push yourself.

What do you hope to achieve in your career as a writer?

In terms of what I’d like to achieve as a writer I like to write stuff to me is politically engaged, aesthetically beautiful that’s a standard I myself comply to my work, whether anybody else thinks the same way – those are things I would like to do by writing. Like any other writer I’d like to be recognised in my time for my writing and to make a decent living out of it. At the end of the day I would like to have written some novels that I can say are fantastic in my personal view.

When you first started how did you go about finding an agent?

My best friend is also a writer and he gave my manuscript to an agent without telling me and that person called me and she said I’d like to represent you, and I went to another friend’s mother who was also an agent and asked her about it and what she thought of this other agent and she said ‘no no let me see’ and she had someone at her agency read it and came back to me and said she wanted to represent me and that was that. I tend to think if you keep working at you’re writing and you’re writing is good you will eventually find an agent. Don’t think that finding an agent process is impossible.

What advice would you give to budding Asian writers?

Don’t write for anybody else. Figure out what it is that you want to say for yourself and how you want to say it. Write something that is honest and true to yourself and take it from there because you’ll never get back to honesty if you give it up. For me that is the most important thing, to be true to what you believe in as a writer.

And the second thing is I think people sort of self-select when it comes to writing in the sense that being a novelist is a really really slow process, like an endurance sword so you only really do it if you kind of have to. And part of writing a novel is a test for yourself: How much do you like the idea of being a novelist? And how much of you actually is a novelist? And over the years writing a book that’s what you learn.

Many people like the idea of being a novelist but quite honestly couldn’t be bothered to spend seven years or however long it takes in which case they’re not novelists. Other people keep trugging their way at it, they finish a manuscript but they don’t sell it, they try another one and those people are novelists even if they don’t get published and I think that is something you have to ask yourself something very honestly. If you write for yourself you’re doing something important.  Getting published is a matter of good luck and perseverance – and you have to stick with it.