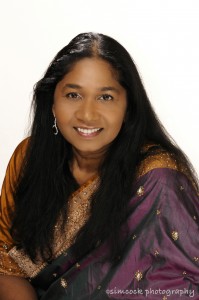 Q. If the story of your life was turned into a play what would the title of that play be, and what would be the hook?

I don’t take myself that seriously so I’ll give you a tongue-in –cheek one.

“Larger than Life” …a plus size guide to conquering the world.

Q. How did you get involved in theatre and what made you stay?

Growing up in Malaysia and then going to school in neighboring Singapore carrying my passport everyday I was very aware of being an outsider all my life. You tend to become a natural observer and in order to belong I became the class clown. If you can make people laugh you immediately feel a sense of belonging. So I started as a show off but eventually this need evolved into a desire to explain myself, to try and define my identity and then to transform my observations into art. What keeps me going is to try and express all that we share and not to highlight difference, which is ironic.

Q. Tell us a bit about Rasa and how you formed the company?

The word “Rasa” encompasses all that makes up my heritage, rasa means emotions in classical Sanskrit theatre, it means essence of life in Tamil and it means feeling in Malay.

I came to live here in 1996 and no one knew me or would give me any work. So I knew I could write, so I wrote a show for myself and the Arts Council was giving some funding for culturally diverse work and seemed to like my proposal. I managed to get the production called “Pooja” not only mounted but a huge hit, which I subsequently took to Edinburgh Festival and then toured nationally and internationally to Sri Lanka and Malaysia. The Arts Council kept faith with me and suggested I find a producer and form a company. So Ed Higginson is Rasa producer and we set up formally in 2003. We have just been made National Portfolio Organisation and uplift in funding for the next 3 years.

Q. Did you have a vision to do things differently, and what sort of different did you want to be?

I am by temperament someone who bucks the trend always.  I never intend to be different in my work but I like to wrong foot and surprise people. People come to one of my shows and expect difference and I like to think that I actually provide a platform for universality.

Q. Tell us about your most recent production to hit the stage?

The most recent was actually highly acclaimed and popular show called Handful of Henna, that toured nationally in 2010 from Feb till May. In March 2011 I was invited to the University of Milan and Teatro Piccolo to have the play translated by M.A students into Italian and will be produced later this year in Milan and hopefully a few other cities in Italy.

In November 2010, I also worked with Tamil refugees and asylum seekers in Manchester to create a show called Hymns for the Drowning which was a part of the Exodus festival organized by Community Arts North West. As a Tamil artist I feel I need to bring that particular story of migration to a British audience.

Q. You’ve acted, presented on TV and radio, written for TV and theatre. What else can you do and what keeps you motivated?

I have done a few feature films, which will come out later this year, One called “All in good Time’ based on Ayub Khan Dins “Rafta Rafta” starring Meera Syal and Harish Patel and a thriller called “Twenty8K” starring Parminder Nagra. I’d like to write a book. I am motivated by people and stories which is timeless and not dictated by trend or current affairs.

Q. What is your greatest achievement?

Hope it will come.

Q. What is your experience of Asians at the theatre, in terms of audience and what would you like to see more of?

Some theatre audiences want the two extremes either their life mirrored on stage like a documentary or to escape completely the reality of their lives. I work on the basis that art is transformative and prophetic and as long as I don’t bore my audience they will keep faith with me and together we grow into a truth that will transform the spectator and the performer. That’s an ideal I know but what a wonderful thing to aim for.

Q. What impact do you think the recent Arts cuts will have on the development of new and exiciting work?

New and exciting work always comes from an artist who has no other choice but to do it.I think we artists have cultivated this myth that new and innovative art comes out of necessity and poverty. Not always true but money in the form of subsidy can buy an artist time, to nurture an idea, time to process and create and the means to get the product out there. Artist will always need some kind of patronage so CUTS ARE ALWAYS BAD.

Q. What is next on the horizon for you – and can you tell us more about your current commissions or work in progress?

A one woman show called “Looking for Kool” which will be in production in the autumn 2011.

Malaysian born Rani Moorthy came to Britain in 1996. She is artistic director of Rasa and has written and performed work that has toured nationally and internationally including Malaysia, Sri Lanka, South Africa, USA, HIFA 2008 in Zimbabwe and Mauritius. Curry Tales was nominated for a Manchester Evening News Award for Best Fringe Performance. Too Close to Home has toured nationally and was nominated for the Manchester Evening News Best New Play award. Her latest play Handful of Henna is on a national tour.

Rani has appeared on Coronation Street, A&E and Cold Feet. Rani has written for BBC1’s Doctors, adapted her own play Curry Tales for Radio 4 and the Woman’s Hour drama Whose Sari Now.