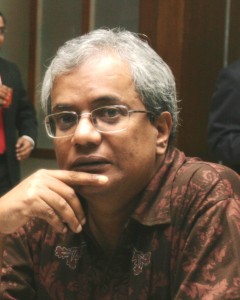 Every sleep has a dream. The idea is to be able to see it and yank it out from stupor. In 2006, while I was fast asleep, I dreamt I would be writing not for a living but to tell a story.

The opening words came out like a song, the beginning was fleshed out and I even knew specifics of the libido meter of my alcoholic 25-year-old widow protagonist of Victorian India. The dream had handed all of it on a platter; it was left for me to just pick it up. It was a charm. Or so I thought.

I begun on some basics and Googled. What it threw up sent shivers down my spine. Apparently, the writing of the novel was only a very big part of a process which, to say the least for a hard-boiled journalist like me, was worse than that of a paper going to bed. Okay, the ulcers of meeting deadlines could be eliminated as a matter of choice but here, very cruel indeed, the options of putting to bed lay with the other party. And saddest of all, the power balance was chiefly in the hands of women, a species I have never been lucky with in my life. Google gave me a single most important piece of trivia: 80% of good literary agents in the world (read: the West, there are no literary agents worth their salt in our sub-continent) were women.

But the dream returned. This time it told me that there was no woman in this world who was not worth pursuing. For love, for hate, for pleasure, for balance. And yes, for agent-ing, if it came to that.

I finished my 110,000 word historical reincarnation romance in three months flat. My gut told me that while I wrote in the nights, it would be a good idea to query in the early mornings; night breaking into dawn, actually. I had no plan at hand but there was no time to waste. I was darned raw to the entire process which simply allowed me the pleasure of failure every time I sent out a query. The rejections came twice as fast but you see, as I mentioned just a while ago, it was there to be expected. For a long time, the only partial requested for was from a man agent.

It helps that I sleep alone…mostly, that is. You dream better if you sleep without any arm lazily crossing the cobbled path of dreams. This time, the dream returned and told me stories of female Long John Silvers and feisty Rebeccas and my desire, nay, determination to succeed amplified with every pink slip. I just had to prove women wrong. In a matter of a few months, more than the book itself, what had taken over was the ancient urge of a man being accepted by a woman whose face he had not even seen. The dream cautioned me that I was going off track. I steadied myself. The book, Dasgupta, not the women, I rushed to remember.

In fact, even as I sent query after query, all the time just changing names and my eyes burning and fingers turning hard, I actually launched into quite a romance with this lovely agent who told me that she was “tired of solitary evenings.” I have treasured that particular email because going by my phenomenal ability to get the wrong end of the pink, I stopped corresponding with her.

Okay, through this random method in madness, I did get an agent in London but she could not sell my ms and it languished for two years. I had by then quite forgotten that at some point in my life, I had researched for hours on Victorian India, knew biographies of British Viceroys like the back of my brown hand, and had eventually pulled off what I thought was an epic on reincarnation, romance, virtues, vices, British torture and women’s terrorism without even once trying to hit Harlequin where it ought to hurt them the most. Nobody lip-locked in candlelit bushes in my novel.

I had no intentions of reinventing the wheel. I am a student of literature and simply followed a dream, mish-mashed a couple of good, time tested formulas to make up what I now think has turned out to be a perfectly poised fresh New Adult historical tome.

One good thing about me, I think, has been that I have not read a single award-winning Indian novelist. I have not touched Adiga, saw Jhumpa only once in Calcutta when she was here for her wedding, merely loved Kiran Desai’s book title, heard of Naipaul, and interviewed Arundhati as a journalist and that too about her activism. Amitav Ghosh happens to be a hometown boy but believe me, I have never ever had even the urge to call him up and seek some advice. We Indians are not very sociable, you see. And some like me are not even cut out to seek literature with a vengeance. I knew what needed to de done though even if that meant turning all tables on their heads and throwing logic out of the window.

So when my London agent failed, after having made me rewrite some 70,000 words afresh with some perfectly sound advice, I went back to my old emails and hunted for IDs. I had the names of a few hundreds of agents at hand and I dreamt that night again. I was told to hunt for new agents. A new woman was always worth pursuing, the Voice rang out loud and cleared and stayed there till the time I was on my laptop again for free hours deep into the night. To cut a long story into a tiny url, it looked something like abhijt@every-woman-at-hand-whz-an-agent. Reckless efforts, dangerous territory poised for fresh doom. But I did not care. I wasn’t, thank you, handling a wife anyways.

Not that the colour pink has eloped with my ex-wife’s lover; no, that’s not going to happen to me in this lifetime. The rejections started again and I took all this with a benign sense of déjà vu. Some agents remembered me (“ Hey, you still at it…of course, I would like to read the revised version. Send asap.”) while the new ones were uncomfortable, as they all are, on a first date (“ Hmmm, if she hasn’t been able to sell it, I doubt whether I would be able to. Sorry.”). I was smart, you see, I had taken out too many women out in my life which had now turned into a walking talking MS without expectations. I have a feeling these lovely, well-meaning, erudite agents quite understood my psyche. It’s a pity that I will not take names but of the around 1,000 agents I queried, I must have seriously developed a relationship outside the strictly professional with at least a dozen of them. And all of them who rejected me eventually, gave me gems of advice which only made my novel so much the better. To all those for whom pink slips are terror, I have only advice: look overleaf.

And this I have written at length in my India Today blog and thus won’t go into that again: I finally landed two lovely women and two smart men who wanted to rep me. Yes, yes, four, in all. For the first time in my life, I was not at the receiving end of pink and I felt terribly lousy telling the three that you see, finally, I had been accepted elsewhere. Patricia Moosbrugger of Colorado with a sparkling record for the last two decades is my agent. Good luck to her. She needs it. Because as we in India often say, it’s all up there in your karma. Not hers, but mine. I am the author, you see; it’s been my doing. But if karma does exist, dear Patty will get a gender specific editor. My editor will be a lovely lady in New York. I think she wears glasses and has auburn, curly hair. I know. Because I dreamt about her only last night.

Abhijit Dasgupta, 50, is an Executive Editor of the sub-continent’s biggest magazine chain, India Today. You can follow him on Twitter at @abhijitdg.