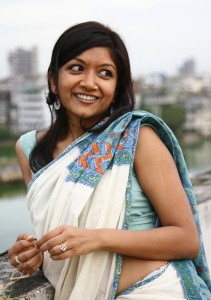 Tell us a bit more about Like a Diamond in the Sky and where the initial concept came from?

Like a Diamond in the Sky is about a couple of rich university kids who fall into a circuit of drugs in the slums of Bangladesh. The story explores their feeling of alienation in the chaotic metropolis of Dhaka city and the social fabric of the community around them. The protagonist, Deen, struggles to find a spiritual connection, but he is unable to transcend his physical reality, all the more so because of his addiction. (The classic conflict between din and duniya – the spiritual and material.) This is his journey to redemption.

This story may be compared to City of God or Trainspotting, with the classic theme of sex, drugs and rock n’ roll, but in this book it all takes place in the emerging megacity of modern Dhaka. The subtle rot that pervades all classes of society finds its playground in the gritty underworld, an aspect of the city which has never been exposed in a novel. In this complex, and sometimes savage setting, Deen battles to master the two sides of his nature.

Who did you write the book for? What audience did you have in mind?

I have some close friends who are recovering addicts. Their strength inspired me to write this book. Drugs are a growing problem in Bangladesh, especially among the youth. Addictions, mental illness, depression, these are all considered ‘taboo’ topics here, so no one talks about them. People need to know more about addiction. I hope some of the young people currently hooked on drugs will read this book and realize how dangerous their so-called-party scene is for their health and well-being.

I also hope people outside of Bangladesh will read this book and learn a little more about what life here is like. Bangladesh is a place most people don’t have any access to. Globally, people are only familiar with the country’s monsoons… and micro credit schemes. While micro credit is a cool, innovative way to empower the poor, it’s still all about poverty. I wanted use this novel to share a bit about our art, our culture, our thoughts, our voices, our ideas.

I think everyone can relate to the underlying theme – the search for happiness and the battle against loneliness that consumes us all. The metaphor of the addict also reminds us of our negative proclivities and the importance of staying positive.

Who are your greatest literary influences?

There are so many, I’m not sure where to begin. I like the simplistic style of Hemmingway and Fitzgerald, the chiseling away of details, till you’re left with something very fine. That’s something I’ve tried to do. I like the manic emotions of Jack Kerouac’s writing (my protagonist is named after his Dean Moriarty) and Marquez’s imagery (yellow butterflies make their way into my novel). I like how Arundhati Roy comfortably nestles foreign words into her prose.

You describe a dark and dangerous world, how much of this was inspired from real life experiences?

Through my friends, I had the good fortune of meeting Doctor Yusuf Merchant who runs a rehab in Mumbai. I spent a month there, learning from him, about addiction, so this book is heavily researched. I spent a month in a village talking to ultra poor women to explore their understanding of happiness in order to do the research for my thesis – I was doing a masters in social psychology at the London School of Economics. That shaped one of the characters in my book, Falani, the drug dealer who lives in the slum. (I wrote the book a few months after finishing my thesis.) LSE is also very leftist and socialist and some of that political discourse made its way into my story.

As a first time novelist what were the major hurdles from pitch to publication?

However, I got very lucky.

A group of Indian publishers were in Dhaka for an India Bangladesh Festival of Books and Writers organized by the Indo-Bangla Cultural Initiative and Independent University of Bangladesh. That was a great initiative and I hope there are others like it in the future, perhaps organized by British Council, BBC, or the American Embassy, to give us even greater outreach and exposure.

I’m a member of a group called Writers Block. We invited the publishers from India to have tea with us. There I gave them my manuscript. I was lucky that Zubaan/ Penguin India they chose to publish it and take a risk with me, an unknown Bangladeshi writer. I am grateful for these opportunities. I have yet to find a publisher in the UK/ USA.

What are your experiences of being a female writer? Do you think they differ to your male peers?

Who you are emerges in your writing. Your gender affects your emotions, experiences, thoughts, and also how you relate to the world. Your age, education, family, where you’ve lived, who you’ve met, all these things play a role too. And then there’s the creative element, which comes from a tap of magic water, according to Harun from the sea of stories.

Though my gender may affect my take on life and hence my writing, I don’t think it has affected my experience as a writer. I haven’t faced any sort of discrimination, if that’s what you mean.

As a writer living and writing in the East, how do you hope to connect with readers from the West?

This is a challenge I have yet to overcome. I spent most of my life living in the West. I grew up in Canada, did my undergrad in USA, my masters in London. I’ve also spent over seven years in Bangladesh and here I’m very much an insider, so I feel my writing is a mix of East and West, meant for audiences both East and West, but there’s also a question of publishing and distribution, etc. In general though, I think the lines between East and West are dissolving as we become an increasingly global race, especially thanks to the internet!

Shazia Omar is a social psychologist.  She completed her undergrad at Dartmouth then worked for a year as an investment banker in New York.  After three years of traveling, visiting ashrams and learning yoga, she completed a Masters at LSE.  Shazia is a member of Writers Block Bangladesh. She works at a development agency and teaches pilates.