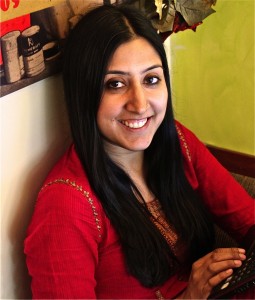 Please tell us a little bit about yourself and how you got into the world of writing?

I was born in London and lived in Birmingham for many years before moving to India. I now live in Manchester. The best thing I have done is spending two years running a small guest house Seclude, in the mountains in Himachal Pradesh in India.  I always wanted to write, when I was nine I wrote a long story about a penguin and a tiger in a zoo, who run away together – my teacher wrote in my school report that I was good at writing stories. I had the first short story I wrote as an adult published ten years ago in a Tindal Street Press anthology – Whispers in the Walls, which was very encouraging – Tindal Street Press have always been very supportive of new writers.  In the ten years since I feel I’ve been learning to write, as well as understanding that writing is not just about craft and reading, but also about politics, ideas, compassion, wisdom and lived experience.

You’re the editor of a new anthology of British Asian literature with an intriguing title, ‘Too Asian, Not Asian Enough?’ What’s that about? And how did the anthology come about?

We told writers who were submitting their stories to the anthology that they could write about anything they like, they wouldn’t be told that they were too Asian or not Asian enough. There are a few narratives that we see again and again, that have become synonymous with the British Asian label; stories about a second generation that wants to fit into western society, clashing with their ‘traditional’ parents who hold them back, or more recently, stories about the radicalisation of young Muslims. In my conversations with ‘British Asian’ writers it has been apparent that many don’t identify with the label or with those narratives.  Others, including myself, can identify with both, but can feel suffocated by the sense that what we want to write about seems stale and cliched, those familiar stories become a barrier for accessing and writing about our realities.

We wanted to bring together, in one book, the diverse stories that we want to write and are writing; stories which might be nothing to do with being of South Asian origin.  Stories which complicate the idea of British Asianess, which is often seen as something fixed and pure, often gritty, working class, so writers and stories that don’t fit into this idea are seen to not be authentic enough, Asian enough. And stories which may be seen as too Asian; about South Asian characters and communities, explored with context, specificity and compassion.

British Asian literature (esp South Asian) has leaned on some recurring themes and issues for many years – that of arranged marriage, forced marriage, coming to terms with cultural identity, and of course on politics. What if anything is new about this collection and what sort of stories can a reader expect to find?

It is difficult to generalise about the stories in this anthology, they are so diverse, and that is what unites them, as well as a  sense of freshness, energy and truth. We encouraged writers to write anything they liked, and we were delighted with the variety of stories that were sent in, writers seemed to relish the freedom the anthology gave them.  Some had already written the stories they sent us and had found it difficult to place them.  As I say above, there are stories in the book that overtly are nothing do with being South Asian; a fable about a hair collector in a fictional European village, a story set in an American university campus and a story set in ancient Roman empire, which is also about an arranged marriage. There are stories that centre on South Asian origin characters, about love, heartbreak, loneliness, mental illness, stories that explore British society; class, racism, consumerism, celebrity culture, reality shows.

Is there something, if anything at all that defines British Asian literature and how do you think the genre will evolve over the coming years?

The diversity of the stories in this anthology highlights how problematic and forced categories can be, which expect writers to write a certain kind of story, depending on their surname, religion, skin colour.  On the other hand, I do think that there is something that we share, in terms of our histories of colonialism, as immigrants or descendents of immigrants, because of our skin colour.  For some of us, there is also commonality in terms of culture, class and the effects of a very recent transition, from villages and towns in India to Britain. The genre will hopefully not continue to develop as a genre, like chick-lit or detective fiction, which will only be limiting and suffocating for writers, but will be a loose collective term for many exciting and different writers with diverse backgrounds, interests and writing styles.

Which stories did you particularly enjoy working on and who should we look our for?

I enjoyed all the stories. The greatest pleasure for me was coming across new previously unpublished writers whose stories were so accomplished and thoughtful, for example N.S.R Khan, Dimmi Khan, Rohan Khar, Ishani-Kar- Purkayastha.

5) Going back to the selection process, how did you decide which stories to include?

I was drawn to stories that seemed to be fresh, energetic, and true (as opposed to authentic). Stories that you didn’t feel you have read before.  The process of selection was collaborative with Tindal Street Press, and we were of course, looking for well crafted stories. But I was also interested in stories with heart, with depth, with something to say.  I was reluctant to include stories that ridiculed ‘asiannesss’ or religion in a simplistic way, since we already get to see enough of this.

Kavita Bhanot grew up in London and lived in Birmingham before moving to Delhi to direct an Indian-British literary festival and then to work as an editor for India’s first literary agency. She spent two years running a guest house in the Kangra Valley of Himacha Pradesh and is now a PhD student at Manchester University.  She has had several stories published in anthologies and magazines and is the editor of the short story collection Too Asian, Not Asian Enough (Tindal Street Press, 2011).