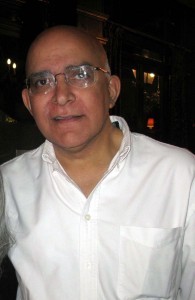 Q. Please tell us a little bit about yourself and your latest book, The Cloud Messenger?

I was born in Karachi,  and briefly studied in South India before moving to London in 1970; so I’d already travelled around quite a bit before settling here. The Cloud Messenger depicts some places I know, and shadows the movements of my life, though it isn’t an autobiography. It is, above all, the story of a search.

Q. What inspired you to write this book? Why now?

It began as a short story, inspired by an obituary I read of my charismatic teacher of Persian who had, I thought, died long ago – but in fact she hadn’t. The original impulse was to write about how an education in the classics influences your choices but only partly equips you to deal with life’s practicalities.

Why now? Why does a writer choose to write about anything at a given moment? It’s largely an unconscious process, but it was, in part, a talk I gave about my writing at the oriental institute of Rome University that gave me the idea; I started writing in March 2009, just after coming back from Italy.

Q. What research went into writing The Cloud Messenger?

I reread many of the texts I’d studied at university, but also read those I’d missed out on! On the other hand, I’d written a paper on Sufi poets in the early 2000s, and I think that the poetry and ohilosophica texts I read for that  influenced the novel and its protagonist’s intellectual trajectory by illuminating to me how much of it I had already unconsiously absorbed. Towards the end I found myself drawn to the verses of Shah Abdul Latif, whose work I hadn’t read at university, as I didn’t take Sindhi as a subject.

Q. Memories, observations and reflections play a big part in your story, which forces me to ask, is this book partly semi-autobiographical?

Partly, or semi-, are the key words; there’s more fiction, or imaginative restructuring there than fact or even memory. For example, after leaving university I did postgraduate work in continental philosophy and psychoanalysis; I started to write fiction at the age of thirty and published my first story in about 1987. I also wrote critical prose, and reviews. My first book appeared in ’93, and my second in’99.

Like Mehran, I taught too, but until much later – the 90s  – teaching was only an occasional, part-time occupation.

Q. There’s beauty in simplicity and you’ve mastered the art of writing without fuss. Your writing is free from clutter – so much so that the reader can admire the images you conjure rather than the language you use – and your stories are usually short in comparison your contemporaries. Who or what has been the greatest influence on your writing style?

You have to work hard at getting rid of the verbal clutter till simplicity becomes second nature. Now it’s the opposite – writing elaborately – that I find difficult. My influences are too diverse to number, but oddly enough I’d cite my parents, their love of music and literature, and the stories they told as my greatest inspiration. I love classical Persian and Urdu poetry from Attar to Iqbal, from Jami to Ghalib and Mir, from Rumi to Faiz. In the Western canon, I started off being influenced by the plays of Ibsen and Chekhov; and the fiction of Pushkin, Kleist, Flaubert, Karen Blixen, Tennessee Williams, Cesare Pavese, Marguerite Duras – oh, so many.

Q. Do you prefer the short story form as opposed to the novel?

It isn’t a question of preference, really; I love reading both. My natural inclination, however,  is to write short stories. I can write a story in a day (though I might spend a month, or several months, on another one). I can’t see myself abandoning the form. But the move to longer fiction in my last two books was a natural progression: when different stories started to overflow and meet like bodies of water I found a confluence.

Q. Would you agree that a writer, much like your protagonist, Mehran is dogged by restlessness and internal conflict?

I think all writers have different ways of approaching their material. It’s possible, too, to write out of joy as I have often done. Mehran is a blocked writer, hence his conflicts; writing releases him, once he starts.

Q. Mehran learns the difficult lessons of life, love and friendship in The Cloud Messenger. When you look back at your own life do ever wish that there were things you had done differently and do you allow your characters to have freedoms that you never enjoyed?

I might fleetingly wish that some events in my youth had occured earlier, or that I’d been wiser in my choices then; but really I’ve done much of what I wanted to, and received much more from life than I asked for or even imagined. I’ve curtailed my characters’ freedoms, if anything; for example, I’d be much quicker to flee a negative experience than Mehran, but easy rides don’t always make for interesting fiction.

Q. The Cloud Messenger in some respect pays homage to some great writers. As writers we often find that those before us are much more eloquent in saying what we want to say. What do we owe, if anything at all, to great poets and poetry or the past?

Poets and artists die; but I don’t think great works of art ever do. Those before us have a grandeur that we can’t aspire to. But art also belong to its time. Each generation is charged with ‘painting it today’. The greatest homage you can pay the artists you admire is to find your own palette, of colours that cast new lights and new shadows on your chosen genre.

Q. In light of this, who’s work past or present, do you admire most?

As a writer of fiction in our time, Qurratulain Hyder; she was a family friend, and I read her work (in Urdu) with a sense of wonder and homecoming. Also Pramoedya, the Indonesian, whose work I can only read in translation.

Q. Having been part of the writing sphere since the 80’s what excites you about the current literary scene?

The 80s were an exciting time to begin: the negativity of Thatcherism paradoxically enouraged a a thrilling multiplicity of voices and perspectives. Not much excites me today in comparison, but the discovery of something I haven’t read still revitalises my joy in reading,

In the twenty-odd years of my career I’ve seen the ‘scene’ become more like a circus with more emphasis on writers’ personalities than on their writing. I shrink away from the demand on writers to comment constantly on current affairs: I’d rather leave that to skilled journalists, which I’m not.

It’s exciting, of course, to meet intelligent readers, but most of the time I’d rather be doing the work than discussing it.

Read a lot and read creatively and adventurously, but you have to work, travel and live, too. Keep your day job for as long as you can. Don’t rush into print until you know what you have to say in your own way and don’t expect subsidies.  Reading teaches you the craft, but it’s life out there that gives you the stories.

Aamer Hussein was born in Karachi in 1955 and moved to London in the 1970s.  He is a fellow of the Royal Society of Literature and reviews regularly for the Independent.  Aamer has published four collections of stories and a novella, Another Gulmohar Tree, which was shortlisted for the Commonwealth Writers’ Prize Europe and South East Asia in 2010.