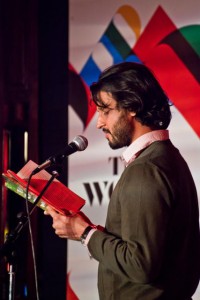 Edinburgh is the place to be in August. Buzzing with festivity, the city becomes a cultural paradise playing host to numerous excellent festivals and events. Yet, among all these fests rocking the city, it’s the International Book Festival that turns out to more inspirational.

As soon as you step onto the wooden floorboards of the foyer, the spirit of the festival immediately grips you, ushering you into the tented locale of Charlotte Square Gardens, where it’s sited, and where the air seems to flutter with the power of the written word, intellectual ideas, passionate discussions and fervour for literature.

In seventeen days, around 190,000 visitors celebrated 797 writers from 40 countries. The enthusiasm of those visiting was understandable. For where else would they get the opportunity to listen to both established and new voices, meet and talk to them, head straight to the festival bookshop afterwards to read their book and then if they like it, buy a copy signed by the author.

With the dark clouds hovering above Charlotte Square Gardens and the wet weather casting a gloom on the other festivals of the city, the leading lights of contemporary writing kept the numerous venues lit up by their book readings, vibrant thoughts and ideas and interactions with the audience making it a memorable time for everyone involved. Booker winners A.S.Byatt, Michael Ondaatje, Allan Hollinghurst, Ben Okri and bestselling author of The Time Traveller’s Wife Audrey Niffenegger, Ali Smith, Will Self, Jackie Kay, Carole Birch and Sebastian Barry were among others who attended the festival.

The festival had an Asian flavour to it with India as one of its themes. Besides, a whole new generation of vibrant, young Asian writers showcased their talent, injecting a certain zest and freshness to the Asian literary scene at the festival. Several of them, such as Anjali Joseph, Chan Koonchung, Manu Joseph,  Mirza Waheed, Neel Mukherji, Rahul Bhattacharya, Sanjeev Suhota and Shehryar Fazli as first time novelists are in the running for the Newton First Book Award. A special prize to be decided by public vote and one that guarantees that extra bit of publicity and sales these young writers need for themselves and their books.

Anjali Joseph certainly seemed to be the cynosure among all the young Asians attending, having recently been flushed with the prize-winning success of her novel Saraswati Park that won her both, the Betty Trask and the Desmond Elliot prizes. Her event with Guardian journalist and fellow debut novelist, Neel Mukherjee, author of A Life Apart had sold out weeks before the festival began. In the cosy rectangular setting of the Writers Retreat venue of the festival, with the rain tapping at the roof of the tent, both of them read from their books, before answering questions from an engaging audience on the sexual themes portrayed in their novels. Later, Neel reflected on immigration, colonialism, and the characters of his highly acclaimed novel. Afterwards the discussion drifted towards the bad reviews their books got in India and to their favourite authors.

The Man Asian Literary Prize shortlist of Tabish Khair, Manu Joseph and the winner Bi Feiyu of China were put together, along with Indian novelist and co-director of the Jaipur Literary Festival, Namita Gokhale, who chaired most of the events featuring Asian writers. In the atmospheric Spiegeltent venue, the wooden tent of mirrors with a travelling bar-cum-ballroom, the discussion raged from Gothic literature to the thin line between fiction and factual writing and on the differences between the literatures emerging from the East and West.

Most author events were set up, keeping in mind the themes their books sought to explore. In the case of debut novelist Shehryar Fazli, author of Invitation and Kamila Shamsie, out with her latest book, a non-fiction titled Offence; it was the rapidly changing culture in their home country of Pakistan, with both of them delving on the issue while discussing their books.

In other events, debutant Sanjeev Sahota examined his book ‘Ours Are The Streets,’ described by the Sunday Times as ‘a sad panicked story of physical, mental, and moral decay.’ While Aatish Taseer shed light on his second novel ‘Noon’ and India’s latest children’s fiction writer, Irfan Master’s talked about his debut novel ‘A Beautiful Lie.’ In another event, Chan Koonchung, author of The Fat Years, a dystopian novel of China in 2013, explained the thoughts behind his book.

A series of non-fiction books such as Mark Tully’s India: The Road Ahead, Patrick French’s India: A Portrait,’ Angela Saini’s Geek Nation and Siddhartha Deb’s The Beautiful and The Damned: Life in the New India offered diverse and extraordinary perspectives on a country that never fails to intrigue and amaze those who try to come to terms with its bizarre existence and progress.

New Delhi based cricket journalist Rahul Bhattacharya, the author of The Sly Company of People Who Care, elaborated on his journey from factual writing to fiction, which has been as satisfying as the trip to Edinburgh from India. So much so, that he has now turned to fulltime fiction writing. Whilst, Mirza Waheed talked about his skillful and stirring debut novel The Collaborator that depicts the civil war in Kashmir.

Among the other established Asian literary talents who made their presence felt, China’s first novel laureate, Gao Xingjian talked about his life as an exile and his recent work Ballade Nocturne which he describes as ‘a libretto for a dance performance.’ Whilst, Hari Kunzru, with the million pound advance for his second novel still fresh in everybody’s mind, proffered meaningful insights into his genre-defying third novel ‘Gods Without Men,’ set in the Californian desert. Tahmima Anam, on the other hand, discussed her new novel,’ The Good Muslim,’ set in Bangladesh at the end of the brutal civil war of the 1970s.

With the festival now over and the voting for the Newton Book Award still on till October, it remains to be seen if any of the books by these emerging Asian writers are popular enough to win. T oregister your vote please visit http://www.edbookfest.co.uk/the-festival/newton-first-book-award