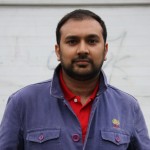 Q. Please tell us a little bit about yourself and your book, West of no East?

West of No East is my first published novel. Previously, I’ve been published by Tindal Street Press, Wasafiri, and Aesthetica Magazine. I live in east London, where I also manage a small indie publisher, Limehouse Books and work as a part-time consultant for Booktrust / Diversity in Publishing Network.

Q. What inspired you to write a love story with protest at its heart?

I wanted to write a story that was as fresh and relevant as it could be. It was pretty clear to me and continues to be clear to me that protest is at the heart of all we do in this recession, certainly the worst recession since the ’30s. I wanted to relate this story to a simple relationship between three characters: a man, his wife, and the man’s first true love.
Q. Yiour book is a light read but doesn’t shy away from talking about issues in marriage, betrayal and inter-religious relationships. Do you think that writers can be guilty of making their works too serious on the one hand or not serious enough on the other?

There is a strong tradition in England to believe that literary fiction long, often historical, and linguistically complex novels is better than easier to read ‘general’ fiction, for want of a better word. (I choose England rather than the UK because I’m not as familiar with Scottish, Welsh or Northern Irish literature).

However more people have the opportunity to read accessible literature, indeed it often sells far better, the caveat being that it doesn’t tend to win awards. Simply put, I wanted to write a short novel that people would read, understand, and hopefully enjoy. I worry that authors write something serious because they want to be taken seriously, the two things don’t often correlate.

Q. Why do you think protest has become the story of 2011?

We’re in the worst recession of our modern times, have a generation of young people without the opportunity to progress, and a government that doesn’t seem to accept that can do little to escape the mire we are in. The saddest thing is that the root causes of this recession is the simplest of human traits: greed and ignorance.
Q. Given the recent riots in the UK do you feel you could go back and write more of this story, a sequel perhaps?

I haven’t ruled out writing a sequel to this novel. If I did it would follow on a few years later, rather than continue from the end of the novel.
Q. What’s next on the horizon for you as a writer?

My next novel is actually going to be a satire set in the publishing world between 2005-2007. It will be called Half Price.

Q. Tell us a little more about your publishing company and more importantly, what sort of books you’re into?

My company is called Limehouse Books (born Glasshouse Books). It celebrates its second birthday this October. We have published eight print titles, with two more to come in 2012. We’re very different from traditional publishers as we solely commission our titles, which means we don’t accept submissions from the general public or literary agents.

My tastes are diverse, and my aims are to fill gaps in the market and research into underpublished areas. It’s exciting but continually nerve racking.
Q. Briefly could you tell us more about DIPNET and what sort of things we can look forward to in terms of a more diverse publishing workforce?

The Diversity in Publishing Network (Dipnet) was founded in 2004 with the simple goal to help publishing become more equal (therefore more diverse). My work as a consultant for Booktrust (where Dipnet currently resides) is to work closely with the HR departments of publishing houses, academics from all the universities that provide publishing MA courses, and our 1,300+ members. One strand to my work is events, coupled with  promoting opportunities for people to network and hopefully enter or progress in this challenging industry.

Bobby Nayyar was born in Handsworth, Birmingham in 1979. In 2006, he was published in the anthology Mango Shake (Tindal Street Press) as well as in journals such as Wasafiri and Aesthetica. He’s been based in London since 2005 first in north London, now east. In October 2009 he founded Limehouse Books. West of No East is his debut novel. He also writes the publishing blog, theyearofpublishingdangerously.co.uk.