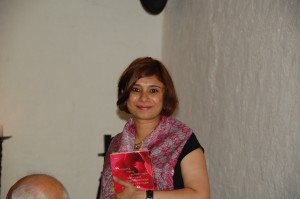 Perfectly Untraditional is a character-driven novel about all of us—ordinary people with our strengths and shortcomings. And it’s these imperfections, emotional outbursts, and temperaments that make us human. It is a book about modern India, happy immigrants, possibilities, importance of relationships, impact of childhood, meaning of identity, beauty of friendships, and existing social issues.

Q. What inspired you to write a novel with a gay protagonist?

It was almost as if I was guided towards writing about a gay protagonist: Shaili Kapoor.

I was disappointed to see Indians and immigrants always portrayed as victims of assimilation. There were barely any stories about children of the global world—new age immigrants from modern, educated, well-settled Indian families who moved abroad to learn, study, travel, and experience a different culture.

Plus, I wanted to acknowledge that the dynamics of Indian relationships, at least in the ever-growing middle class, is changing. Men these days are accommodating and supportive and women are rather independent. Nuclear families isolate, to quite an extent, the day-to-day interference and nuances.

Finally, while most may say that distance romanticizes things, I think it offers an untainted perspective on the past and present. Growing up, Shaili Kapoor, an Indian woman brought up under strict and abusive regimen, was never given the opportunity to explore her own identity. In the 90’s India, when Shaili was in her twenties, dating wasn’t as acceptable as it is today. Marriages were generally arranged at a young age.

When Shaili moves to New York, she finally has the mental space to discover herself. So, if we have a good guy and good life and good money and no tears shed over missing silk saris yet an agitated, unhappy woman, the gay-angle seemed like a plausible possibility.

Q. What research did you do, or conversation did you have before penning this book?

I strongly believe our circumstances influence our behavior, choices, opinions, and personality. Given the book has several characters with their own unique voyages; I had to conduct multi-faceted research. Talk to young, first generation immigrants and their families and understand their response to immigration and “nontraditional” choices.

I also conducted detailed secondary research about gays and homosexuality. But the information I gathered felt impersonal—like data collected for scientific research. I didn’t want to patronize anyone. Creativity and imagination is all good, but as a straight person, I recognized my limitations in commenting on the dynamics of gay relationships. So, I spoke with people across different ethnicities within the gay community. And they were incredibly helpful and open.

Q. Since its launch, has anyone jumped to the conclusion that you are writing about yourself or from personal experience, and what do you say?

Haha, so many people have asked me if the book was inspired by my life, though they know that I have been happily married—to a man—for a while. J It’s human nature, I think, to presume that an author’s first novel is a collection of anecdotes or display of personal experiences masked behind fiction. The assumption is that in your first book you write about what you know and who you are. I am not saying that this preconceived notion is entirely baseless. Two of my dearest cities in the world are Pune and New York. Since I mentioned them in my book, I had to write about something I didn’t know.

I have to admit; sometimes, presumptuous statements can be flattering to a writer. A friend’s carpool buddy, whom I have never met before, recently read Perfectly Untraditional. She went on to recommend the book to her partner, both of their families, and several of her friends. This lady is convinced that a person of heterosexual origin couldn’t accurately represent a lesbian’s emotional evolution or challenges the way it’s been done in Perfectly Untraditional. I am humbled by her generous opinion and feel satisfied in knowing that readers find my book authentic.

Q. Leading on from that, what has the reception been like from your family and friends?

Every writer hopes that his or her book is received well. Aside from those wishes, I didn’t have any expectations from anyone when I wrote Perfectly Untraditional. Frankly, I didn’t write the novel with an intended audience in mind. I had the story inside of me, which I had to pour out on paper.

But I have to say the love, support, and encouragement from family and friends has been exhilarating. People have gone out of their way to be kind. And I feel blessed to have them in my life.

Q. In Indian culture we’re guilty of brushing things under the carpet and not talking about things we really should. Do you think writers have a responsibility or an obligation to talk about that issues like homosexuality, which are often ignored?

I don’t think writers should be confused for social activists. They don’t always have the qualification or the experience to take an authoritative stance on social change. But they do have a sense of responsibility in staying honest to their profession. And because writers are in a position to influence minds, I believe they should share their opinion about issues they truly believe in.

One of the many reasons people have appreciated Perfectly Untraditional is because it doesn’t take sides or come across as didactic or make any declarations or present any agendas. Homosexuality happens to be one of the issues I wrote about because I am pro humanity and pro choice. Gays, like straight people, are humans. And every human being has a right to choose how he or she lives. I am sick of society setting milestones and defining right and wrong.

Q. Coming back to the book what was the novel writing process like for you? Did you have a writing ritual?

It was maddening.J It’s difficult to fathom how emotionally invested I was in my book; time and place ceased to hold any meaning for me. I have to say my husband was extremely patient and supportive. There were days when I lived inside my world of Perfectly Untraditional. I would wake up in the middle of the night and write a dialogue. Or we could be at a party and a social trigger would have me scribbling—I carried a journal everywhere. You see, after a point, the characters in my novel weren’t fictional to me. I lived, felt, heard, and saw them. They had become a part of my everyday life. And maybe that’s why I feel I left a precious part of me inside the book.

Q. How was this different to writing poetry, which you do so well?

Thank you, for your kind words, Farhana. To be honest, patience isn’t one of my virtues. While a poem can be written in a day, and I have been known to finish rough drafts of poetry chapbooks inside a week; novel writing was a different beast—a lot more engaging, detailed, and extremely time consuming.

While poetry has helped be become more spiritual and emotionally aware, I believe writing Perfectly Untraditional has made me a calmer, patient, sensitive, and a lot more empathetic as a human being.

Q. What’s next for you as a writer? Will you be writing more novels, or are you going back to poetry?

I love writing. And depending on my calling, I choose the genre. My next project is a nonfiction book. Yup, I am taking the leap into an entirely new genre. The title, Mouth full, is a collection of personal essays and poems that will be released in 2012. Aside from Mouth full, I am simultaneously working on my second novel and a book-length poetry collection.

Write everyday. It doesn’t matter how many pages, but make a habit of it. Also, many people want the shortcut recipe to success. Well, there is no such thing. Dedication, resilience, hard work, discipline, and positive thinking are the mantras to hang on to. You have to tell yourself that failure isn’t an option and that you are your own competition. Remember these famous lines from Ayn Rand’s “The Fountainhead”: “I don’t make comparisons. I never think of myself in relation to anyone else. I just refuse to measure myself as part of anything.”

Sweta Srivastava Vikram (www.swetavikram.com) is an award-winning writer, poet, novelist, author, essayist, educator, and blogger whose musings have translated into four chapbooks of poetry, two collaborative collections of poetry, a fiction novel, and a nonfiction book of prose and poems (upcoming in 2012). Her scribbles have also appeared in several anthologies, literary journals, and online publications across six countries in three continents. Sweta has won two Pushcart Prize nominations, an International Poetry Award, Best of the Net Nomination, Nomination for Asian American Members’ Choice Awards 2011, and writing fellowships. Taj Mahal Review describes her as “A poet with hauntingly beautiful talent.” Sweta has held several artist residencies in Europe and America and worked on collaborative projects with artists from Zimbabwe and Australia. A graduate of Columbia University, she reads her work, teaches creative writing workshops, and gives talks at universities across the globe. Sweta lives in New York City with her husband. You can follow her on Twitter (@ssvik) or Facebook (http://www.facebook.com/Words.By.Sweta).