The Things I Would Tell You is a collection of new writing by British Muslim women, edited by writer Sabrina Mahfouz.

The project started life more than two years ago and stemmed from Mahfouz’s work with high school girls. “There was nothing to go to, to see the wealth of writing that has come from women in this country who are from a Muslim background.” At the time, debates about the lack of diversity were rife and yet Mahfouz kept hearing the same thing from people looking to diversify their panels: they didn’t really know any Muslim women writers. She was keen to find a solution in something that truly celebrated the dynamic range of Muslim women’s writing. The Things I Would Tell You serves to challenge the notion that such writers don’t exist while doubling-up as an easy reference point for anyone actively seeking out these voices.

In her introduction, Mahfouz writes “one of the aims of this anthology is to dispel the narrowing image of what a Muslim woman – particularly a British Muslim woman – looks and lives like.” Mahfouz is outspoken. We talk a lot about the misrepresentation of Muslims, why a book like this can help invite others into the space, as well as help combat the demonisation of Muslims. The term Muslim has become deeply politicised in recent times, she says, when in fact, it has never been a narrow term. 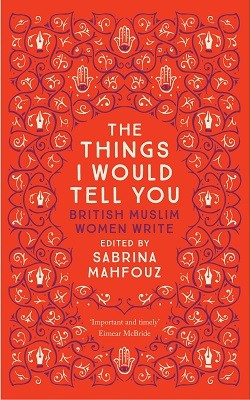 The Things I Would Tell You has a playful, experimental feel – one that refuses to be constrained by form, theme or style. This creative freedom allows writers to explore topics that deeply resonate with their own values, enabling their contributions to really shine. The sheer breadth of work coupled with a range of voices is a real achievement.  Established names are published alongside emerging talents. Kamila Shamsie’s outstanding short story “The Girl Next Door” is preceded by an equally impressive performance piece by Aliyah Hasinah Holder, for example. Mahfouz says it was important for both new writers and established writers to be included, the latter helping to raise the confidence of the former.  “Having been a young writer not that long ago myself, and having that association with people who are established and that you’ve looked up to creatively, and artistically is fantastic. It does a lot for your consideration of yourself as a writer.” The other benefit of this grouping is that it allows readers to discover new voices too.

“The fact that these women all have a British identity and a Muslim heritage is important. The canon we are handed down and much of what is taught at school do not always provide those from diverse backgrounds with an opportunity to find writing that resonates with their own experiences.” – Sabrina Mahfouz

Mahfouz’s passion for diverse writing and widening people’s perceptions is infectious: “Having a space where you are specifically supporting, promoting, platforming and encouraging groups of people who are underrepresented is needed.” The hope is that the collection helps to put Muslim women’s writing on the map as well as raise the visibility of these writers. Through a series of live events Mahfouz aims to extend the reach of the book as well as develop it with the young people she meets.

The Things I Would Tell You is fiercely independent. It hasn’t kowtowed to expectation; allowing Muslim women the space to tell their own stories in whichever way they wish. Like many Muslim women I know, it resolutely stands on its own two feet.