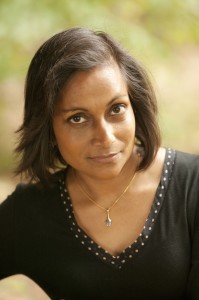 The SI Leeds Literary Prize is now open for entries. The biennial award is for unpublished fiction by Black and Asian women residing in the UK and has a prize fund over £3,000.

In its inaugural year, the £2000 first prize was awarded to Sri Lankan writer, Minoli Salgado, who heard about the prize online.

Salgado has been writing since she was an undergrad, and has found publishing success with her poetry and short stories in several journals.  At the time of entering, she hadn’t yet found a home for her debut novel, for A Little Dust on the Eyes.

The story, which centres around war, love, memory and loss, is set in Minoli’s ancestral home, Sri Lanka. It is inspired by her many trips back there. It is a story, she says, she has carried with her for a long time.

‘I made a few false starts and then it finally got off the ground when I got the chance to set aside two days a week exclusively for writing.’ Salgado says. ‘The story evolved from the many visits I made to the country at the height of the civil war, when disappearances were rife and people just did not speak openly about what was happening. I was interested in finding a language that might make this silence speak.’

Salgado’s other works, Broken Jaw, a collection of short stories was also long-listed for the same prize.

The SI Leeds Prize aims to act as a loudspeaker for Black and Asian women’s voices, enabling fresh and original literary voices from a group disproportionately under-represented in mainstream literary culture to reach new audiences. It suggests that Black and Asian women still get a raw deal when it comes to trying to get published. Does Salgado agree?

‘To be honest, I believe it’s tough for all new writers and it also depends what kind of book you’re talking about. The publishing industry has gone through huge changes and it seems that while digital technology has opened things up and made things more democratic, mainstream publishers have become more conservative, opting for safe bets and highly commercial fiction and non-fiction. There is certainly a market for books by non-Western writers – so many of the best international writers today are from what you might call Black and Asian backgrounds – but the kind of book and its commercial viability are key considerations now. I believe that there may be an expectation by publishers of the kind of work Black and Asian writers should produce, which can be a real constraint to creativity.’

Winning the prize has meant that Salgado has been able to move on to other things, in terms of creative output. She has also enjoyed reading at a poetry festival in Nicaragua and helped to launch the SI Leeds Literary Prize this year at the Ilkley Literature Festival. She has now secured an agent and her novel is being considered for publication.

Salgado makes a good case to support creative endeavours, and opportunities exclusive to Black and Asian women. ‘Literary prizes are by definition aspirational. They both reflect the values of the culture we live in and serve as cultural interventions of sorts. It was wonderful to come across the SI Leeds prize and I must say it’s heartening to see that the Asian Writer has come up with a prize for unpublished fiction too! With the move towards favouring highly commercial fiction, I believe that anything that opens things up so that literary culture really works to reflect the rich diversity of voices we have has got be a very good thing.’

As for Salgado’s top tips for success, she says feedback is key.
‘Get feedback from readers whose judgement you trust and take their advice on board. Ensure your work is as polished as you can make it. Once you’ve submitted the piece, start working on something new.’

Minoli Salgado was born in Kuala Lumpur and grew up in Sri Lanka, South East Asia and England. Her poetry and fiction have been published internationally in journals such as Wasafiri, Short Story and Asia Literary Review, and anthologised in the UK and US. In 2012 she represented Sri Lanka at London‘s Poetry Parnassus, part of the Cultural Olympiad, and won the inaugural SI Leeds Literary Prize for her unpublished novel, A Little Dust on the Eyes. She is a Senior Lecturer in English at the University of Sussex and the author of the critical study, Writing Sri Lanka (Routledge, 2007).

The SI Leeds Literary Prize is founded by Soroptimist International of Leeds, in partnership with two well established and highly regarded literary organisations, the Ilkley Literature Festival and independent publishers Peepal Tree Press.   With support from Arts Council England, the Prize has developed additional partnerships to enable increased support for our winning writers in 2014, through Arvon and The Literary Consultancy, as well as free writing workshops in partnership with Writing on the Wall and Leeds Libraries.

For more information and to enter please visit