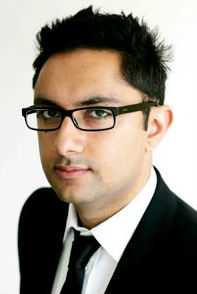 Sathnam Sanghera, author of Marriage Material has been shortlisted for the Costa First Novel Award.

The author, featured here by The Asian Writer last month, took to Twitter to thank his supporters.

many thanks for kind words about @costabookawards nomination for Marriage Material. More info about the book here: http://t.co/EWJMukQiSZ

The Costa Book Awards is the only major UK book prize that is open solely to authors resident in the UK and Ireland and also, uniquely, recognises the most enjoyable books across five categories – First Novel, Novel, Biography, Poetry and Children’s Book – published in the last year.

Marriage Material follows the story of Arjan Banga, who returns to the family corner shop in the Black Country after the unexpected death of his father. The shop represents everything he has tried to leave behind – a lethargic pace of life, insular rituals and ways of thinking. But when his mother insists on keeping the shop open, he finds himself being dragged back from London, forced into big decisions about his imminent marriage and uncovering the history of his broken family – the elopement and mixed-race marriage of his aunt Surinder, and the betrayals and loyalties, loves and regrets that have played out in the shop over more than fifty years.

The judges, (made up of Fanny Blake, Matthew Cain and Rachael Beale) said of the title: “Fresh, funny and thought-provoking – an epic tale of family life with characters that bounce off the page.”

Winners of each category receive £5,000, and will be announced on Monday 6th January 2014. The overall winner of the Costa Book of the Year 2013 will receive £30,000 and will be selected at the Costa Book Awards ceremony in central London later that month.

Sathnam Sanghera is an award-winning writer for The Times. His first book, The Boy with the Topknot: A Memoir of Love, Secrets and Lies in Wolverhampton, was shortlisted for the 2008 Costa Biography Award and the 2009 PEN/Ackerley Prize and named 2009 Mind Book of the Year. Marriage Material has been picked by Waterstones as one of the fiction debuts of the year.

Sam Byers’s Idiopathy (Fourth Estate), Kate Clanchy’s Meeting the English (Picador) Nathan Filer’s  The Shock of the Fall (HarperCollinsPublishers) makes up the rest of the shortlist.