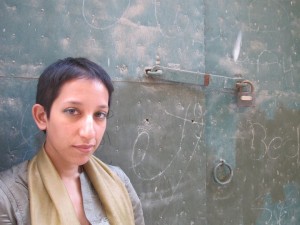 Q. Beyond the Wall: Writing a Path through Palestine is an important book and reading it at a time when the situation in Gaza is so fragile (to say the least) brings home the disturbing reality of life under occupation. Did you begin your journey with a view to write a book about the Palestinian struggle or did that come later, once you had witnessed for yourself what life was like?

I agreed to go on the West Bank trip out of admiration for the founder of the Palestine Festival of Literature, Ahdaf Soueif, who I revere as an activist, journalist and public figure as well as a novelist of great distinction. I was also incredibly impressed by the dynamism, intelligence, culture and fair-mindedness of her son, Robert Omar Hamilton, who produces the festival and is also an extremely prominent activist. At first, the trip sounded like an adventure , an intriguing assignment and an opportunity to see a place which was very much in the news. I have always been extremely motivated by humanitarian, human rights and justice issues so I was well versed in theory – but theory doesn’t come close to witnessing the reality itself. I did know, however, that part of the reason for the trip and the rationale behind choosing the participants was that ideally we would write or speak about what we had seen. It was only when we were halfway through the trip that I realized I had the structure for an entire book in my head. It just fit together perfectly. I could see the whole arc, see how each chapter would look at a different West Bank city or a different issue/theme…. And luckily I had been taking notes throughout. I wanted to provide a snapshot of what the West Bank is like now, without assuming that every reader would be a specialist.

Q. There is an uncomfortable harrowing feeling as you pore over your words, and as the reader is taken on this journey with you. It’s a short book, and at times feels much more like an intimate account, of a friend telling you about their trip. Your visit is a cultural and educational one, but you are met with disgust and ugliness time and time again, not only in your experiences with military force and soldiers but also in the shared experiences of children and families, the people you travel with. Was your journalistic approach to tell it like it is? To strip back and let things unfold? Was there a need for you to make this an honest report of what it was like but also some attempt to humanise Palestine and the struggle?

I think it’s incredibly important, when writing a reportage such as this, to realise that you are not in any way an important component in events. My desire was to write down exactly what I saw, when it happened, as it happened, as clearly and precisely and sharply as I could, without adding any editorialisation, overkill, polemic, excess emotion. I wanted the events and observations to speak for themselves as I felt this was more powerful. I have no desire to represent myself as some intrepid individual going into a difficult situation; as travellers with a well-organised international group we were relatively well protected. And as foreigners we could leave at the end of the trip. So we were in a privileged position. My aim was to convey the reality of day to day life in the West Bank. On the question of humanising Palestinians and their struggle – actually I wanted to do the opposite, which was steer clear of being patronising. Palestine is full of homegrown activists, speakers, writers, artists and intellectuals who are justifiably wary of the patronage of the many international bodies who come offering assistance and collaboration of various kinds. This was another reason why I deliberately understated everything including my own participation and involvement.

Q. There is so much that is that is unclear about the conflict in the West. The media continues to use language that gives way for misunderstandings especially at this volatile time, but your book offers readers a snapshot of daily life, of trying to go through a checkpoint, the humiliation of having to turn out your belongings for soldiers who have no regard or respect for you or anybody else it seems. The inconvenience of it all. Were you careful not to write a book that delves too deep into the past, or an academic text that trails the history of the conflict that could be somehow disputed? Was there a conscious decision to write something that anybody could pick up and explore, and which would challenge their own misconceptions?

Yes, the decision to keep the book short, clear and current was absolutely deliberate. What puts people off learning more about Palestine and the history of the region is the sense that the history is complex, that newspaper report are sometimes difficult to follow because they refer to regions, histories and organisations that they are not familiar with, that they will never understand it or will be required to read a number of heavyweight books about it to fully grasp matters. I am 100% on the side of reading heavyweight books, as it happens – but I thought my own book could be an opener, allowing people to understand quickly the tenor and terrain of life in theWest Bank. Equipped with that, they could then delve deeper. This book is for everyone.

Q. One of the other disturbing things (amongst many!) your book highlights is the treatment of girls and women which often goes unreported. It’s there in the silence of the girls in the classroom, and the quiet submission of the women you meet. But it is the women who seem to be the instigators of so much good – in organising efforts to make things better, culturally or educationally or anyway they can and you say they are respected by their male peers, even though they remain hidden from having top positions at the university, or paid work. Were you shocked at the treatment of women in Palestine, and that even in a place riddled with conflict so far from home, women were still having to deal with such battles?

I wasn’t remotely shocked by the treatment of women and girls in Palestine, in the Middle East where I’ve been doing a lot of speaking recently, or anywhere else in the world including the UK. The subjugation of women – expressed in control, coercion, violence including rape, harassment, victim-blaming, casual slander in conversation, derision, marginalisation, exclusion from most meaningful and remunerated positions of power, denial of rights, exploitation of labour including sexual labour and much more – is endemic globally. As ever, of course, the full presence and participation of strong and vocal women artists, activists and speakers, was heartening, but that does not paper over the reality of the subjugation of women, which is a global problem for which the whole world should be ashamed.

Q. What did you learn about yourself from undertaking this journey to Palestine and seeing for yourself a world which is often written about but whose story remains untold? Did it go some way to reflect on your own understanding about creativity and environment?

I think the Palestine visit opened the world up to me as a writer. I was grateful, too, to my publishers for bringing the book out so quickly – I was in the West Bank in May 2011 and the book came out exactly a year later – as I think its publication chimed with a great deal of public interest in the area and the issues. I learned about the importance of, not just going to a place, but talking and writing about what you’ve seen, being clear and honest. I am completely enthused by this new aspect of my life and career and would like to undertake many more international trips to all parts of the world. However, I would like to spend more time in new places, getting more deeply involved. And I would very much like to go to Gaza for an extended period of time next year or the year after. If anyone’s reading this who can facilitate that, get in touch!

Q. Finally as a critic what excites you about the stories emerging from Palestine and which are your top three must reads from the region?

The stories which come from Palestine are as creative, thrilling and interesting as those from anywhere in the world; I don’t want to ghettoise Palestinian art and culture by implying that everything Palestinian artists create must be to do with their specific history. I have more than three recommendations for readers: check out the work of Suad Amiry, Selma Dabbagh, Susan Abulhawa and Ghada Karmi as well as Jacqueline Rose and Guy Mannes-Abbott and a brilliant anthology called Beirut39.

BIDISHA is a writer, critic and radio and TV broadcaster. She specialises in the arts and culture, social justice issues and international human rights, presents for Radio 3, 4 and the World Service, writes for numerous publications including The Observer and The Guardian and has judged many literary prizes including the John Llewellyn Rhys Prize, the Orange Prize, the Polari Prize and the Bristol Prize. She also does outreach work in charities, refugee centres, schools and prisons and is the patron of various arts and human rights organisations. She is the author of two novels, Seahorses and Too Fast To Live, an internationally bestselling memoir entitled Venetian Masters: Under The Skin of the City of Love and a reportage, Beyond the Wall: Writing A Path Through Palestine, which was published this year by Seagull Books/Chicago University Press. She is currently completing her fifth book, about asylum seekers and refugees in the UK, which will be out in Spring 2014.