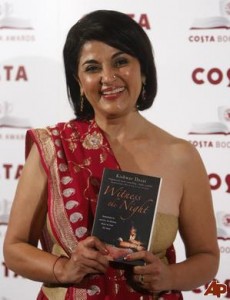 1) Could you please tell us a bit more about yourself and your writing journey so far?

I grew up and lived in India for most of my life, but relocated to the UK around seven  years ago. I started work straight after college as a journalist (in Chandigarh ) –but then moved to Kolkata where I began working in television–and I remained in the TV industry
mostly in Delhi, for over twenty years as a special correspondent, a producer, an anchor. My last job was as the head of a TV channel. However, I always wanted to write books –from the time I was a young child. After I came to UK I decided not to pursue TV anymore and instead focus on writing. My first book was Darlingji :The True Love Story of Nargis and Sunil Dutt. Though written in the UK, it was researched in India and published there . It got very good reviews and I suppose that encouraged me to venture into writing another book.

2) What made you take the leap into fiction and write your first novel?

The story behind Witness the Night had haunted me for a long time. It is based on real events I had noticed while working as a journalist and running a TV channel. But I wanted to reach out to a wider audience —I know that sometimes news reports and non-fiction writing has a limited reach. I had initially thought of making a film–but somehow when I sat down to write the script I thought I should first narrate the story and see whether it would interest anyone. But once I started writing I found I just couldn’t get up till I had finished writing the whole book.

3)  Witness the Night, doesn’t always make for comfortable reading. The content is dark and haunting and the plot is disturbing at the best of times. Were you surprised when you heard about the Costa’s shortlist?

Oh yes–I was totally surprised . I never imagined the response the book has got so far. Both in the UK –and in India. Its been simply fantastic. And so to be on the Costa shortlist –such a prestigious prize–was something beyond my wildest dreams. I thought my book was far too serious to attract this kind of attention. People have commented that because it is written like a crime novel it makes the subject matter it deals with an easier read.

4) And what were your thoughts when you were announced as the winner?

I haven’t stopped smiling ever since ! This really means a lot . Not just to me –but to people who imagine that writing books is a hopeless case. I think one has to believe in yourself and in your own voice. After all, this book was also rejected by publishers who found the subject far too grim —and look at where it is today. Winning the Costa First Novel Award has changed my life forever.

5) Going back to the issues you explore in the novel, from female infanticide, to homicide to corrupt police officers, and the deep inequality between men and women. What made you tackle such matter in your first novel?

As I said these issues had disturbed me for a long while. You cannot be a woman in India and not notice the gender discrimination at every level. Right from the way you are brought up, the treatment at home, the education you may or may not receive—, your economic and intellectual freedom , everything depends on the strict social norms which surround you. I was lucky that i was brought up in a liberal family–but I knew of many women who were not so fortunate. Whether it is the cases in the mental homes, or the honour killings or the dowry deaths –India has invented a million ways to crush and kill women. I think I was very angry when I started writing the book–I hope some of that anger will also be transferred onto the readers.

6) The book is gripping but how accurately do you think it represent the real India/and the realities of life for women living in Punjab today?

For anyone who thinks that the top two per cent of women who live an emancipated life in India (including me and others like me ) represent the true India , I would encourage them to look at maternal death figures, and the figures which point to the feeble chances of the survival of a female child, when compared to the male child. Do you know that estimates show that over 1300 baby girls are aborted in India –every day?  My book was set in the Punjab –but many aspects of the treatment of women are universal.

7) Let’s turn our attention to your heroine, Simran. She is everything a fairytale heroine isn’t; she’s cynical, old, and has some filthy habits. Where did the inspiration for Simran come from?

I  wanted to invent a normal heroine –someone who would resonate with normal readers –someone who is like us —not a mythical lovely creature with super powers. Simran is the kind of woman who is rarely or hardly found in Asian literature . She is a woman who enjoys life, is uninhibited, is a sexual creature–but is also vulnerable –and sometimes makes mistakes. But she is intelligent –and the intelligence is not gifted to her by the benign presence of a man. This was very important for me–as women cannot behave endlessly like Bridget Jones. ( By the way, I love Bridget Jones –but Simran is not her !)

8) You mention in the book that Simran will be back, what’s on the horizon for her?

I am now working on the next book where Simran comes back. She deals with social issues and problems and tries to understand them–and in that sense she isn’t really a typical crime novel heroine. In the next book she encounters an issue which is an international
scandal –and tries to help someone caught up in it. Of course there is an Indian angle to it….but I don’t think I should reveal anything more –or you may not be tempted to read the book.

In 2011 hopefully –Simran’s second book will be published. After that I have to complete another book, which I have been working on for a few years, —the biography of the pioneers of Indian cinema, Devika Rani and Himanshu Rai. In between I am also writing the screenplay for a film along with a young Indian director –so that should be good fun.

10) Finally what advice would you give to aspiring writers out there?

Just write that book. I think we spend a lot of time worrying about what the perfect plot and characters are. I have heard authors actually plot their books according to what will sell–and of course sometimes it works. But if your book is something which is close to your own heart it will shine through. It certainly happened with me.

Kishwar Desai is a writer and columnist. Her debut novel, Witness the Night won the Costa First Novel Award 2010. She has worked in both print and television for more than twenty years, as a journalist , a TV anchor and producer, and head of an Indian TV channel. She is married to Lord Meghnad Desai and has two children.