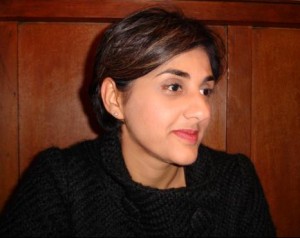 Please tell us a little bit about yourself and how you got into writing?

I grew up in Bradford in the 1970s and ’80s. Both my parents had come over from Pakistan – my father to work in the mills. He was a great believer in the value of education so he pushed us all – myself and 3 siblings – to do well at school. I ended up going to Nottingham University to study Law and Politics but decided against a legal career when one of my lecturers encouraged me to consider becoming a journalist. After a post-graduate course, I started working in TV news and current affairs and then, several years later, started also in print journalism. A couple of articles I’d written about my childhood attracted attention which eventually led to a book deal with Random House.

You’re better known for your investigative journalism, what compelled you to write a story and experiences of growing up as a Muslim woman in Bradford?

I felt there wasn’t much general understanding of what it was like to be a British Muslim or the child of immigrant parents. There had been much written or discussed on the subject but in a fleeting, soundbite manner. I wanted to tell a personal narrative – tell a story so that people might be able to understand a bit better about me and also, hopefully, for people to have some empathy.

Was it hard to turn the tables on yourself – and look at your own life through a magnifying glass?

I thought about writing the book long and hard for some time. I was certainly nervous about what people – not least, my own family – might think and say. But as I got more and more fed up with the news coverage and lack of understanding, I strongly believed I had to go ahead and write the book. It wasn’t actually a difficult process – in addition to my personal story, I also looked at the turbulent race relations of Bradford and included aspects of my journalism. The book starts with my detention in Bangladesh where I was held whilst filming a Channel 4 documentary.

Were there times when you held back from revealing all?

Yes, I edited myself throughout. I don’t think you should reveal everything in a memoir, some things are quite precious and you want to retain those. Though I tried to be as frank as I could to reveal a sense of how difficult it was being divided between two lives – the one at home and the other at school.

Going back to the process of writing – what was writing ritual like. Describe a typical day.

I wrote the book in the British Library – mostly in longhand which I then typed up into my laptop after each chapter was complete. Fortunately I have a photographic memory so recalling details from my childhood wasn’t difficult. The structure became apparent as I went along – the final chapter is a letter to one of the 7/7 bombers which I didn’t think of including until much later during the writing process. I basically just got my head down and wrote for about 8 hours most days. I was pretty much always the last one to leave the library.

The book is quietly powerful – it tells the story about a Muslim woman growing up in Bradford and all the conflicts that come with having a Muslim upbringing in a British environment – but also the older you, who cannot understand the actions of the 7/7 bombers. Do you think that the very term British Muslim is an anomaly where conflict will always exist or have you now found contentment with being both Muslim and British?

It has taken me a long time to see that it is a real blessing to have two identities, two cultures to draw upon. There is a tendency just to look at the conflict – but there are also some real benefits. I feel that I have a stronger understanding of people and what makes them tick because of my upbringing and now I don’t see it as problematic at all. But it has taken me many years to get to this stage. We should stop beating ourselves up or over-analysing who we are – and just get on with life.

And more importantly what do you think needs to change before true assimilation is possible (not the misguided one that is displayed by youth in the book)?

I am a great believer in the need to learn English. I have seen how many people from previous generations – including my own mother – have found it difficult to see this country as home mainly because of the language barrier. It’s very hard to achieve anything – better community relations, better job prospects – if you don’t have the basic tools to converse with people.

I found the book very poignant, especially the bits about you and your father. You clearly loved him very much and you’ve dedicated the book to him (and your mother of course). What was the greatest lesson your father taught you?

Actually to have respect for people of other faiths. He taught me about the importance of Jesus and Moses – we were always watching TV programmes about other prophets.

I cried reading your book. Did you cry writing it?

No, I became so engrossed in the actual writing that it took the sentiment out of recalling childhood memories. Though I often cry when people write to me and tell me how they’ve been moved by what they have read.

Finally what advice would you give to anyone considering a career in journalism and thinking of writing their own story?

I would quite honestly say that journalism is a dwindling industry so think hard if that’s what you want to do. Local and national newspapers are under threat and there are cuts also in television. I’m afraid writing a book doesn’t pay very well so pursue a good day job and think of writing as something to do in your spare time – until you hit the big time!

Zaiba Malik is an award-winning journalist who has worked extensively in television, print and radio at a national and international level for the past decade. She has reported and produced news and current affairs programmes and features for BBC News, Newsnight, Channel 4, Radio 4, Guardian, LA Times and BBC World Service amongst others. Zaiba was recently named as one of the twenty most influential black and Asian women in the UK. She was awarded the Women in Film and Television Award for New Talent for a “remarkable contribution to film and television and excellence, creativity and invention” and has received the Asian Women of Achievement Award for Media Professional of the Year for “singular and unparalleled dedication to journalism”. We are a Muslim, Please is her first book.