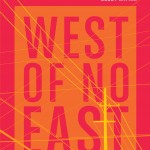 While researching a photoessay on the first decade of the 21st century, Tarsem discovers a photograph of Rubina, a former university friend now working as a campaigner. Unable to comfort his wife who has just recovered from her second miscarriage, and cope with the spectre of restructure and redundancy at his office, he contacts her. In reconnecting he faces the prejudices of his youth. Tarsem is Sikh, Rubina is Muslim. And the last ten years have seen them follow opposing paths shaded by events beyond their control. Encouraged by her, Tarsem travels to India with his parents unaware of the impact it will have on all their lives.

West of No East was written to follow events currently happening in the UK. One of the major themes of the story is protest, as well as the fractured relationships between Sikhs and Muslims. The background to the novel follows events such as the youth rioting in London, revolution in Egypt, and major press stories related to multiculturalism in Britain.

The novel is short at just under 40k words, but is perfect for anyone wanting to get back into reading, or looking for a holiday read.

Author of West of No East, Bobby Nayyar was born in Handsworth, Birmingham in 1979. In 2006, he was published in the anthology Mango Shake (Tindal Street Press) as well as in journals such as Wasafiri and Aesthetica. He’s been based in London since 2005 first in north London, now east. In October 2009 he founded Glasshouse Books. West of No East is his debut novel. He also writes the publishing blog, theyearofpublishingdangerously.co.uk.