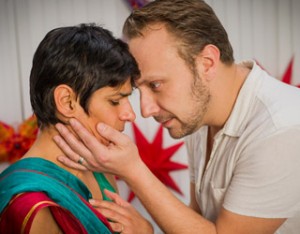 The Husbands, written by Sharmila Chauhan and directed by Janet Steel

If this is what a feminist utopia looks like, then at first glance, it appears to be lots of fun. Welcome to Shaktipur, a remote village some 50 years in to the future, where women are prized for breeding, and daughters are cherished. Women are allowed freedoms they would not otherwise enjoy in the outside world, and can marry more than one husband.

Shaktipur is a beacon of female emancipation, and its leader Aya, played by Syreeta Kumar, with her short pixie like hair and bare legs, enraptures the men in her life, blessing them with her menstrual blood. Her plan is to take Shaktipur to the cities, and for that she needs to marry again. The husbands are doting and subservient, they live to serve Aya in every way they can; cooking and cleaning by day, fasting to preserve her longevity and fulfilling her desires by night. Much of the action takes place in the kitchen, and a simple  set – consisting of a few benches either side, and a small shrine are put to good use.

Sem, (Rhik Samadder) the first husband is timid and docile, so overly compliant that at times he borders on bland especially during the first half. In the opening scenes, the big concept is a bit lost, lines become clunky and it feels too much like we’re taking a class in anthropology. It’s the one liners and wit from Aya’s favourite husband, the tall dark stocky Omar, played by Mark Theodore that reel us in. Devoted and doe-eyed, Theodre’s pitch-perfect delivery make for a hearty performance. Philip Edgerley is super as the sceptic academic, and is much welcome relief, helping to pick up the pace. Professor Jerome, with his own mission to understand this ‘ridiculous’ civilisation adds much needed humour and testosterone (other than that emanating from Aya herself) to an otherwise brooding and serious play. He comes bearing a wedding gift but manages to unearth the flaws of this seemingly perfect world and it’s not long before there is growing dissent in the bizarre bubble.

This is a play that challenges its audiences and isn’t afraid of tackling bigger issues about the role of women’s lives and equality. As the play moves to explore the implications of gender role reversal, polyandry, exoticism, motherhood and a woman’s right to choose, it leaves its audience with much to think about during the interval.

But, while the second half is compelling, it fails to answers the questions its audience is looking for. Even in this utopia everything seems broken. If Aya aborts the child, she will never have her husbands on side, but without marrying a third she will never fulfil her ambitions. Even in Shaktipur a woman must make compromises. She simply can’t have it all. With all four actors on stage, the severity of Aya’s decision is brought home with a great deal of impact. Kumar, makes for a powerful but ultimately flawed leader unable to live by the principles she is only too happy to instil on her people. Edgerley could have been used to better effect, sometimes he simply plays into the hands of stereotype. Shobna Gulati’s choreography of the sari scene is particular poignant and helps add a bit of pizzazz. With her hands raised above her head, while her husbands wrap her in her wedding sari, Aya looks every bit the bride about to make a decision that will ultimately change her life forever.

A thought provoking play, with a fantastic concept; but works best when it isn’t trying so hard to teach.

You can read our interview with Sharmila Chauhan here .

The Husbands runs til 1st March at Curve Leicester and then continues it tour. Full dates of the tour here.