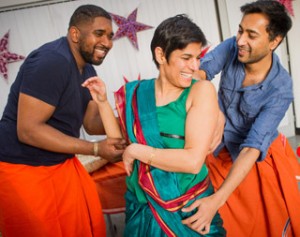 Q. Tell us about your new play, The Husbands, and what inspired you to write it for the stage?

The Husbands follows Aya, the leader of a matriarchal community called Shaktipur, on her third wedding day of Aya.

Set about 50 years in the future, the community has come about as a reaction to the critically low number of girls in India as a result of the female genocide which is very much alive today in parts of Asia. Consequently most women in this world have multiple husbands.

Aya has two husbands – Sem and Omar and the play explores the impact of the looming new marriage of the household and the arrival of a stranger from London who unravels everything they believe in.

I wrote the play as a response to rising levels female feticide (aborting females fetuses) and female infanticide (killing girl babies) in INDIA. The reasons for this include dowry system and also established status. The 2011 stats in INDIA say in some parts for every 1000 boys there are only 300 girls.  I wanted however to reimagine a world where instead of subjugation – we return to ancient Indian practices of matriarchy to see if there is a solution to this current problem by reclaiming different values.

Q. What was the writing process like and how did it differ to writing a short story?

Writing a play is a much faster process than a short story – I can write quite quickly and because I’m not worrying about description. I find it very character led, its much easier for me to find a character on the page in a script than in a short story. Its very gratifying because its so direct and its always interesting and surprising how much you can say with simply dialogue.

Having said that – The Husbands was originally a short story called Frangipani Hill!

Q. What excites you most about bringing a play to the theatre?

I love the theatre. For me it has a magic, a mystique. The ethereal quality of it – is both intoxicating and immersive as well as slightly terrifying!

What is so amazing about writing for the stage is seeing what is on the page being brought together as a collective and collaborative process. It really is amazing and very surreal to see how lighting, set designs, costumes, music all combine to create the space and tell the story.

What I also really enjoy is sitting in with the audience and sharing in their experience. Unlike prose – you can really feel the reaction to the work – as a ‘shared experience’ which gives it a real magic.

Q. What do you hope the audience will take away from watching The Husbands?

The Husbands explores very current issues of female genocide in Asia and also its repercussions. However – in its imagining of a matriarchal society – it also explores female sexuality, power and the role of women – all ideas which are very pertinent to the West today.

So I hope it gives people a lot to think about.

Q.  Finally what do you think makes for good theatre?

Something that’s exciting and emotive. For me there’s nothing worse than seeing luke-warm productions that do not challenge or provoke. Theatre should be a space to do different things and experiment.

The Husbands
The Husbands, a new play by Sharmila Chauhan, is an exuberant, challenging new play directed by Janet Steel — set against a backdrop of modern rural India. A Kali Theatre & Pentabus Theatre co-production, The Husbands is touring nationally, culminating at London’s Soho Theatre from 11-23 March 2014.

Sharmila Chauhan (playwright) is a graduate of the Royal Court’s writing programme, and Kali Theatre’s Lab programme. Her play Born Again/Purnajanam was staged in January 2012 at Southwark Playhouse (Kali Theatre). A reading of When Spring Comes— on the Ugandan Exodus—was performed in Autumn 2012 (Tamasha Theatre). Sharmila’s short stories have been published in print and online, including Tell Tales Vol 2, Happy Birthday to Me, Word Masala, Pratalipi, and Five. She was shortlisted for the Asian New Writer award (2009 and 2012), and is working on her novel Seven Mirrors. Sharmila is also a SAWCC London Curator.