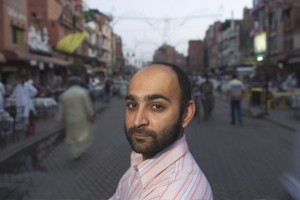 After reading Mothsmoke over a decade ago I was overjoyed, here was an emerging writer who didn’t need to sugar-coat the lives of Pakistanis with exoticism. Instead he was boldly writing about a middle class heroin addict and had a refreshing style (with character of the judge), making the reader part of the story. Mohsin Hamid was the first writer I interviewed to be featured on The Asian Writer. With his second novel, The Reluctant Fundamentalist Hamid made the shortlist of the Man Booker Prize which propelled him to bestseller-dom. Now six years later, and on the publication of his third novel, How to Get Filthy Rich in Rising Asia, Hamid talks to The Asian Writer about his writing career, self help, and that infamous piece that lambasted him as a publicity seeking monster.

Hamid currently lives in Lahore and is writing full time. I remind him that he once said that he had a second job so he could eat (and in saying so, made a point about the struggling artist). So is the art finally paying its way? “I’m currently making a living from my writing, yes,” he says “but it’s taken the better part of twenty years to get there.” I bring in the second person narrative because I don’t think you can talk about his latest work without mentioning it, (the story revolves around nameless characters, you and pretty girl). Hamid explains that he’s used elements of the second person before in his earlier works, and saw this as a natural progression. “I’m interested in exploring the relationship between the writer and the reader,” he says “and what happens when you’re reading a novel and when you’re writing a novel, and the dance that takes place between the two. And the second person in a way makes that explicit.” Hamid’s latest work has largely received rave reviews but moving away from convention is risky and I can’t help but wonder how much readers will appreciate it. “Some readers will struggle to engage with any novel,” he tells me. “You can’t write something that everybody loves but if you can write something that few people love or some people love or feel passionately about then as a writer you can be happy that the novel will have a life.” He hopes that all types of people will read the book and be able to relate to it.

How to Get Filthy Rich in Rising Asia is set in Lahore, but readers could quite easily mistake it to be Mumbai. It’s a love story framed as a self help book and I’m keen to ask Hamid what inspired the self help bit. “It started off as a joke,” he says. “A friend of mine and I were laughing  about the idea that novels are like self help books, we read them because they’re good for us and we were joking about it but then I sat down and thought about it and realised that maybe its partly true. If I don’t write for a while I start getting miserable so maybe there is a degree of self help in writing a novel and even in reading a novel. So that joke became a sort of mysterious premise.” Each chapter of the novel begins with advice from a guru and makes for fun reading. Hamid explains that of course it’s not really self help but that he’s playing with the concept. “I’m playing with the bounds of fiction and non fiction and what novels do and what novels aren’t supposed to do.” I don’t know why but I have formed the impression that Hamid is a perfectionist and I can’t help but ask him if he was happy with the novel when he was finished. “I don’t finish unless I’m pleased…I keep working on it til I’m happy with the book then I stop.”

I feel slightly awkward for bringing up the whole Twitter/publicity monster/narcissist thing. I’d rather gloss over it but I think it’s important to give Hamid a chance to say what he needs to and of course, whatever he does say will add to frame the debate on how writers should conduct themselves on Twitter. “A lot of stuff gets said out there in the ether often at times lightheartedly and without that much thought, for me the notion is there’s a book that I’ve written I would like it to find readers in the first few weeks that its born so it can have a life and people can hear about it and if they like it they can tell their friends.” Publicity departments are increasingly slashing budgets so this all makes sense, after all, writers make money from book sales, but what about retweeting praise of your own work? “If a nice review came in I retweeted it, it wasn’t to say I was the coolest guy in the world but hey, check out this book…its an attempt to find readers.” He also makes the point that other than the month or so that he’s publicising a novel, (after the six or seven years that he’s spent writing it) nothing of the sort has appeared on his timeline. It’s a fair point and having reviewed his timeline it’s a far cry from some of the authors (mainly self published) who are only too happy to keep thrusting their “99p e-book on Amazon kindle – today only” tweets out there and can be un-followed without hesitation.

I move on to talk about Pakistan and it’s own rising – it’s thirst for home grown artists (thousands turned up for its recent literature festivals held in Lahore and Karachi respectively) and how he feels about being the go-to for the next generation of Pakistani writers. “I think there’s a lot of fine writing coming out of Pakistan, there’s quite a few really talented writers and as far as being their go to, I’m not sure what that really means, but if young writers come and ask me for advice about writing or have written a novel and would like me to introduce them to my agent I try to be helpful.” This might be music to the ears of an aspiring writer but he’s firm with what he will and won’t do for an emerging talent. “What I don’t do is read people’s stuff and the reason for that is two fold; I’d be flooded with stuff and I wouldn’t have time to write my own stuff, but the other is I don’t think it’s my place to tell people if they’re good or not. People need to figure out for themselves if they’re good or not. I would hate to be in a position of telling someone that their work isn’t good and crushing them as a writer.”

Next we come to talk about The Reluctant Fundamentalist, the movie. With the film’s imminent launch in the UK (in cinemas 10th May, 2013) I can’t help but be excited and I ask about Hamid’s own excitement of seeing his work brought to the big screen. “Movies and books are two completely different things,” he says “and the movie is very different from the book but that said, I think it’s a very fine movie and Mina Nair is a brilliant talented director and I think Riz Ahmed is a genius actor, really, really fine.” For Hamid his job was about finding the people he respected and to let them do their thing. Apart from the obvious gushing he makes a fine point and something I hadn’t yet considered (having only seen the trailer) “I think this collaboration of an Indian director, British Pakistani actor, American Hollywood actors and a Pakistani novelist is quite special because in making this film, the film stands for the notion that we don’t need to retreat to our separate ghettos and separate ethnic or religious identities. Instead we can come together and make stuff collaboratively.” 2013 is already set to become another big year for Hamid, so where to next, is he working on another book? “You might have to wait a while,” he tells me, “I can’t tell you anything about it now, in the year that I’m publishing a book I tend not to write any fiction. Even I don’t know what the next thing is going to be.”

Mohsin Hamid was born in 1971 in Lahore. He grew up mostly in Pakistan but spent part of his childhood in California and returned to America to attend Princeton University and Harvard Law School. He then worked in New York and London, initially as a management consultant with McKinsey & Company and later as managing director of branding firm Wolff Olins. Mohsin’s writing has appeared in TIME, the Guardian, The New York Times, the Independent, the Washington Post, La Repubblica, the Paris Review, and other publications. He lives in Lahore.