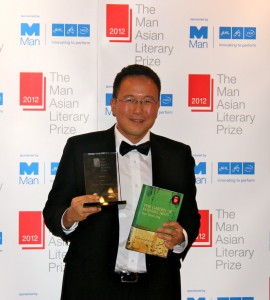 The Garden of Evening Mists by Tan Twan Eng triumphed from a shortlist of five novels, spanning the whole of the Asian continent.

Chair Judge, Dr Maya Jaggi, said, “I have experience of judging many literary awards. But our task as a jury was exceptionally difficult, as well as gratifying, because of the outstanding quality and originality of the novels in contention from across Asia, and the strength of our shortlist.

The winner, The Garden of Evening Mists by Tan Twan Eng, revisits the traumatic aftermath of the Japanese occupation of Malaya, and the post-war insurgency against British rule, with stylistic poise and probing intelligence. Taking its aesthetic cues from the artful deceptions of Japanese landscape gardening, it opens up a startling perspective on converging histories, using the feints and twists of fiction to explore its themes of personal and national honour; love and atonement; memory and forgetting; and the disturbing co-existence of cultural refinement and barbarism.

The layering of historical periods is intricate, the descriptions of highland Malaysia are richly evocative, and the characterisation is both dark and compelling. Guarding its mysteries until the very end, this is a novel of subtle power and redemptive grace.”

This is the second time that a novel originally written in English has taken home the $30,000 dollar prize – all previous winners, except Ilustrado by Miguel Syjuco (2008) were English translations. The Garden of Evening Mists is Tan Twan Eng’s second novel and was also shortlisted for this year’s Man Booker Prize.

Professor David Parker, Executive Director of the Asian Literary Prize, the organising body of the award, said, “Achieved with the seemingly effortless poise of a remarkable fictional artistry, Tan Twan Eng’s winning novel will be prized by all those who cannot resist the mastery of language.”

The current sponsor Man Group will relinquish its title sponsorship from this year. A sponsor for the 2013 Asian Literary Prize is currently being sought and an announcement will be made in April.