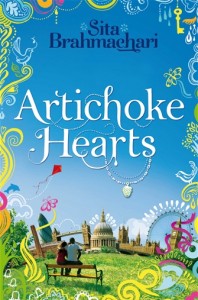 Debut author Sita Brahmachari has won one of the most valuable and prestigious children’s book awards in the country for her striking coming-of-age novel about life, death, friendship and love.
Artichoke Hearts was announced as the winner of the Waterstone’s Children’s Book Prize 2011 by Children’s Laureate Anthony Browne at an evening ceremony at Waterstone’s Piccadilly, Europe’s biggest bookshop, on Wednesday 9th February. Anthony Browne described Artichoke
Hearts as “a beautifully written book about family, friendship, grief and hope, which made me laugh and cry – sometimes at the same time.”
Inspired by the author’s ‘beautiful and bohemian’ mother-in-law, whose long battle with cancer was heartbreaking for her family, Brahmachari started writing the book as a way of dealing with her grief. Artichoke Hearts was praised by the judging panel for the way it tackles the issue of
death head on, treating it as part of the cycle of life and of growing up, and for the “effortless way in which it shows how inspiring grandparents and the older generation can be for children.”
Waterstone’s Children’s Buying Manager, Sarah Clarke, said:
“This is the most honest, emotionally affecting children’s book I’ve read for some time, and a more than worthy winner of the Prize. Its characters lodge straight in the reader’s heart and I defy anyone to read it without crying.”
Beating off stiff competition from a nine-strong shortlist, Artichoke Hearts was published earlier this year, and has already received much praise within the industry. Caroline Horn, Children’s News Editor of The Bookseller, said: “Artichoke Hearts is a delicate, perceptive coming-of-age novel.
The author seems to have an instinctive grasp of the issues faced by young people of this age and I look forward to reading more by her.”
Celebrating its seventh year, the Waterstone’s Children’s Book Prize was created to champion new and emerging talent in children’s writing. As well as a £5000 cash prize – one of the most valuable for children’s writing in the UK – the winner sees a significant boost in sales, and the promise of ongoing commitment to their writing career from over 300 Waterstone’s branches
nationwide.
The daughter of a doctor from Kolkata and a nurse from the Lake District, Sita Brahmachari grew up in Shropshire, and has worked in theatre and education for over a decade.  She now lives and works in North London with her husband and three children.