The prize now in its third year sees the winner take home a US $50,000 DSC Prize.  Thayil was declared the winner at a ceremony attended by renowned literary figures and authors during this year’s DSC Jaipur Literature Festival. Thayil’s debut novel, Narcopolis (Faber & Faber London) has been shortlisted for several major literary prizes and is also still in contention for the Man Asian Literary Prize due to be announced in March.

In an exclusive interview with The Asian Writer last month, Thayil said he hoped he wouldn’t embarrass himself by writing this book. This latest success suggests that he has done no such thing, and has opened the world to his fresh perspective of India. Narcopolis is an intoxicating read which takes us above and beyond to an India submerged in drugs, sex and alcohol. But it is the experimental writing style, which breaks conventional rules and takes the reader on a deep exploration of language and ideas that has delighted critcs and readers alike. 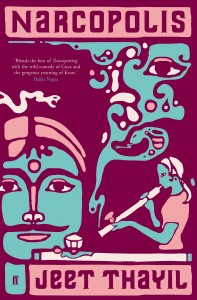 “Narcopolis mixes fantasy and reality to create a powerful story that deals with a less known aspect of life in a metropolis like Bombay where episodes collapse into one another as in the tales of Vikramaditya telling an interminable tale about the less fortunate and the less visible human beings of the city. I am happy for the winner and happy too for DSC that has instituted a unique prize that sets a benchmark for imaginative writing on South Asia.”.

The DSC Prize 2013 was judged by a diverse and distinguished Jury comprising of K Satchidanandan (Chair), Muneeza Shamsie, Rick Simonson, Suvani Singh and Eleanor O’Keeffe. The shortlist was announced in November 2012 in London.

There were 81 entries for the prize this year, comprising authors and translators across India, Australia, UK, US, Pakistan, Bangladesh etc, reflecting the importance of South Asia’s rapidly expanding book market. India is currently the world’s third largest English-language book market (after the USA and UK), and is set to become the largest within the next ten years (according to a BBC Report, May 2012).

Instituted by DSC Limited in 2010, the DSC Prize is awarded annually for the best work of fiction inspired by the South Asian region, people, culture and diaspora; published in English, including translations into English. The Prize is unique in not relying on author ethnicity as an eligibility criterion and is open to authors across the globe writing on the region.