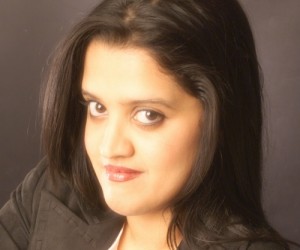 Q. Who are you and what are you best known for?
I’m Anita Shah, known for a number of things in the legal and corporate world (I am a qualified solicitor) but probably most notorious for my participation on The Apprentice back in 2009. I call it a guest appearance as I was the first fired candidate of the series, but it hasn’t stopped me succeeding, including being the only candidate from my year to write for a national newspaper. I contribute to my local BBC radio station and I am also a hospital radio presenter for the Birmingham Hospital Broadcast network.
Q. Did you find writing, or did it find you? Explain!
When something is so deeply embedded in your DNA, you don’t need to find it nor does it find you. It is just there. It is part of your soul, part of your reason for being and the path to fulfillment.
Q. Tell us about your journey as a writer and what you’ve been working on recently?
I starting writing when I was younger with a collection of poems and some early chapters of a first book hidden somewhere in my loft.
As I focussed on becoming a corporate solicitor, my creative pursuits took a back seat until I could fight the urge no longer. I contributed to my company’s colleague magazine before embarking on my first novel Friends in Law. Alongside that, I was a freelance columnist for The Birmingham Press for six months (before it folded) and have written a blog for the Telegraph covering The Apprentice for the last two series.
Q. What do you write about and what keeps you going?
Obviously my Apprentice blog is self explanatory. Foremost, there is something both powerful and rewarding about pulling together a comment about one of the UK’s most successful reality shows. It’s worth it for the positive comments that I receive through my website and for the continued appreciation by the Telegraph editors.
As for my novel writing, it is the momentum of telling the story that really drives me. The fact that my characters can bring me into their world and compel me to tell the story that they want to tell, not the story that I want to tell.  It’s magic!
The publishing world is difficult to crack, and I am under no delusions about that. I continue to believe in the power of positive thinking and believing in yourself.  I know I will get there when the time is right.
Q. What excites you about the book industry?
The advent of e-books is probably the most exciting development in recent times. However, in the same way that many still like their filofax, so do many reasons still like to feel their fingers turn the pages of their absorbing read. I think that the battle between electronic and paper will be most interesting to follow.
Q. Do you have a website? What is it and can we read some of your writing?
I do have a website at www.anitashah.net. You will be able to read some of my columns for the Birmingham Press in PDF.  There is also my blog at http://www.telegraph.co.uk/culture/tvandradio/the-apprentice/. I’m keeping Friends in Law under wraps for the moment, until I secure that all important book deal.
Q. Finally, what’s the best advice you’ve been given as a writer?
I think it was from Carole Matthews. She told me to ‘write every day, even if it just your shopping list!’  I wholeheartedly agree with that!