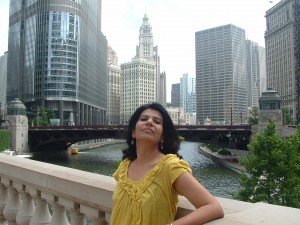 Q. What inspired you to write The Fourth Passenger?

When I travel on the streets of Mumbai, I see women boarding trains, buses to reach their place of work. All of them have a look of determination on their face. The look says, ‘I have to reach to work, come what may’…It is this determination that inspired me to write The Fourth Passenger.

Q. Do you think women’s lives are still constrained by men as they are in your novel?

Q. Generally speaking, you paint men as tyrants and women as ambitious but self sacrificial – what were hoping to do by carving your characters this way? Is there hope for men yet?

In this novel, the women had to have tyrannical husbands. But this is not strange in India and in the social strata from where the women come. Some women resign to the fate and others like these four rise. I was hoping to send a message out that women can be brow beaten by bullying boyfriends, alcoholic husbands and a honour killing believer father, But they can fight back. There is always hope for men :)))))

Q. Do you regard yourself as a feminist?

I am not a rabid feminist. I believe that a man and a woman complete the circle. Both men and women have a share of the pie. But no one is superior or inferior….

Q. Which character from the book are you most like and why?

I like Farzana. She is confident and strong. She dares to love and lose and she also dares to break the barrier…

Q. You recently read at the Emirates Lit Festival, what was the experience like as a first time novelist, and how was The Fourth Passenger received?

It was great. I read at the Dar Al Adab and I must admit I was a little nervous. However, once I started discussing the book I was at ease. The book was received very well.

Q. What has writing this book taught you about yourself?

Q. Religious tension is as subtle in the book as it is in the world in which your characters live in. Were you writing from experience and what message did you want to get across?

Mumbai, the city I was born and live in has seen religious riots and tensions. I have seen them all. I have scurried back home from office when the ’92 riots broke out. I just reached home when the terrorists took siege of the TAAJ MAHAL hotel, I was travelling on the roads when the July train blasts took place…All I can say is that it is meaningless to kill innocents and we must stop it.

Q. Did you have a writing ritual and how did you go about getting published?

There is no ritual. Rather there are bouts. Robin Mizell, my literary agent is the lovely lady who helped me get published.

Q. Finally what advice would you give to our readers working on a novel?

Keep writing, the publishers will come looking for you!

Mini Nair has had two of her books published in India. A post graduate in chemistry, Mini Nair now works for a German multinational company by the day and writes by the night. Mini lives with her family and twin daughters in Mumbai where she was also born and raised. She is an avid cook and voracious reader. The Fourth Passenger is her first novel.