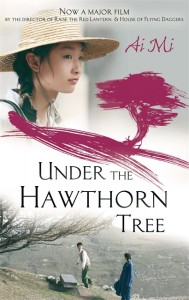 A Chinese blog which was turned into a book and feature film has been published in English.

The Ai Mi blogs were first seen on the Chinese blogosphere where they became an instant hit with readers. The author, whose identity remains anonymous, won a traditional publishing contract and went on to sell a million copies of the book in China.

Published by Virago in the UK last month, Under the Hawthorn Tree tells the story of  Jingqiu who falls passionately in love with a boy nicknamed ‘Old Three’. Jingqiu is from a politically suppressed family, while Three is the son of a mighty army general. Their budding romance is cut short by fate; Three dies before there is an ending for them, happy or otherwise.

Jingqiu eventually leaves China but she never forgets Three, the man who loved her with a passion so pure that she believed it could last forever. Transcending the boundaries between fact and fiction and set in the seventies, after the Cultural Revolution, Ai Mi tells Jingqiu’s tragic story through her diaries and notebooks.

Under the Hawthorn Tree published by Virago is out now £12.99.