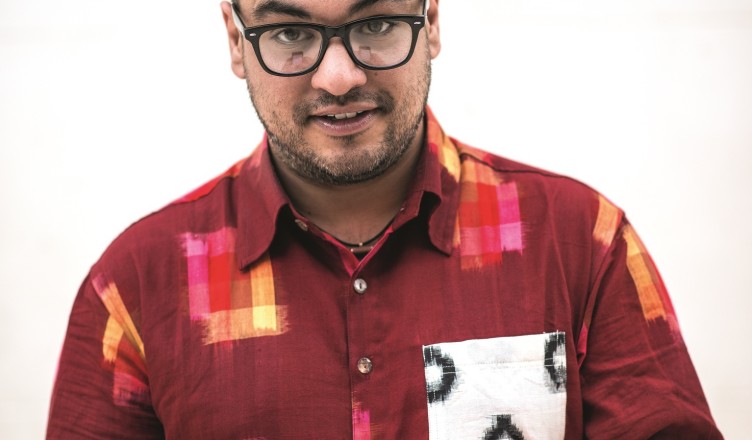 Q. Your second novel is out, it’s called Meatspace – congratulations – what’s the journey been like?

It’s been quite awful, thanks very much. Really hard work. Ultimately rewarding. But it’s been hard work. The week Coconut Unlimited came out, my mum passed away, and I suddenly had to try and manage the best thing that had ever happened to me and the worst thing that had ever happened to me. And doing readings, getting lovely reviews, having prize shortlists threw me into this hyper-reality where I was someone of stature, while at the same time, I had lost one of the most important people in my life. My mum and I had always had a fractitious relationship but when she was diagnosed with cancer, we started coming back to each other. And then she was gone. And it was hard to be smiling on the outside and utterly bereft inside. Like the Sad Clown from that opera thing. I wrote two drafts of two very different novels, quickly, before I wrote Meatspace, because I was worried about momentum and balancing work and writing and life. And both of those drafts sucked. I was anxious, I was depressed and I was not coping. Luckily, my agent Jamie Coleman, and my wife and friends and family created a supportive safe environment around me and shielded me from some of the really dark stuff I was going through, and I felt like writing again. And Meatspace came out of me.

Q. There’s Kitab and Kitab 2. Was it important to you that Kitab 2 was from India, and wasn’t just some ordinary kid from London?

Kitab 2 comes from an environment shielded from Western cynicism, where a Twitter follow count, being a figure in the media, having strangers engage with you on an artistic level – that’s alluring, and the city is attractive. Whereas Kitab 1 is cynical and static and unappreciative of his surroundings. I wanted Kitab 2’s wide-eyed wonder and over-familiar to be a complete disrupt to Kitab 1’s life. He could have come from anywhere, but I felt that making him Indian, I was having a meta-dig at what’s expected of diaspora writers and the way they deal with characters from the mothership, how they are either innocent or corrupted and how they come from this Bollywood-ised place in our brains where, being diaspora people and not mothership people, we’ve fetishized what our counterparts should be. Or at least that’s how the books by brown writers that managed to get published seem. They seem like brown people curated by white people. And Kitab 2 is a symptom of that. At least in the meta-verse of Meatspace. Within the world of Meatspace, his being Indian is a direct conflict against Kitab 1’s coconutty desire to not be bound by his race. Also, I wanted to have an Indian character not just talk in bad bud-bud-ding-ding dialogue. My cousins say dude and bro all the time. So Kitab 2 does.

Q. There is something troubling about the book – the ease with which Kitab 2 is able to emulate Kitab, morph into his namesake all with just a few bits of information – do you think we’ve lost something by opening our lives to social media and sharing in the way that we do?

I don’t think social media has been around long enough for us to work out what constitutes a healthy relationship with the medium. I seem to now think having written the book on it, I know what a healthy social media relationship is, but in reality, I could be kidding myself. I think the danger is in the different personas we’re creating for ourselves, not just online but offline as a direct result of who we say we are online as well. Imagine in reality you’re bad at dancing, but on Twitter you’re always tweeting about how amazing at dancing you are… you have to then in real life say you’re really good at dancing. People know all these facts about us based on what we say about ourselves online, and that is what we’ll always be held to. It’s dangerous. I share a lot less than I used to. I feel like I converse with fewer people nowadays. Mostly because I use Twitter to scan for interesting articles and I use Facebook to keep tabs on my family so when I see them at functions we can get on with the business of spending time together without spending ages catching up.

Q. I loved the disparity of Kitab 2’s version of Kitab and the real Kitab. Kitab 2 thinks Kitab is this amazing writer with an amazing life when he’s just an ordinary guy and actually a little dull. What ideas were you exploring when you were charting their relationship?

That novelists used to be rock stars. Then rock stars became rock stars. Now footballers are rock stars and novelists spend all their time telling the Guardian how little they earn or tweeting #amwriting. I find the writer’s life today depressing. Too many people are money focused, sales focused, prize focused and that’s before they’ve even finished the thing they’re writing. Finish the thing you’re writing and worry about the rest later. If you’re in it for the money and sales, become a barista. Coffee-making is an industry that cannot be replicated on the internet so the world will always need baristas. If you want money and sales, become a barista. If you want to be an artist and play with language, write.

Q. I loved Kitab 2 because he reminded me of that part of yourself that wants you to be more daring, braver, stronger, more adventurous. He is the inner child that wants to break rules and have fun. Where did the idea of having a namesake and throwing him into the plot come from? And are there more Nikesh Shukla’s out there?

Facebook makes you realise how generic your name is. When you think you’re the only Paul Jenkins or Amit Shah because you’re the only one in your vicinity, there’s something brilliant about it. Once you’re on Facebook, you’re in the system, as one of many. I was the only Nikesh Shukla on Facebook for a while. And I thought I was special. I added loads of other Nikesh because I wanted us to have some sort of spiderweb network of Nikeshs around the world to help each other out in a bind. The other Nikeshs weren’t so receptive. Then after 5 years of Facebook use, I found another Nikesh Shukla. So I added him, he denied my add when I sent him a questionnaire and then six months later, he tried to add me. But I’d moved on, having plotted the idea of what would happen if this simple add request gave someone a mandate to assume they were friends with a stranger in real life and so they’d help them out in a bind.

Q. This idea that Kitab could be (and is mistaken for) any other brown guy is interesting. Do you think we’ve become increasingly invisible in a world where we are more connected than ever before?

There’s a line in one of the earlier drafts of the book where Aziz and Kitab are talking about how no one is special anymore, especially now the internet has given us a space to find others with our niche interests. I think the internet is great for us finding like-minded souls who share our bizarre obsessions and fantasies and likes and dislikes, but that part of human frailty that is so wrapped up in ego, it doesn’t like it. Our arrogant need to be an individual, the only one into the thing, it does not have the ability to process the fact that there many of us out there. I don’t think we’re becoming increasingly invisible. I think we’re getting lonelier.

Q. You come back to themes of grief and loss, and of loneliness which you explored in The Time Machine, and I particularly enjoyed this thread in the narrative. Do you still have more to say about what it’s like to lose someone and will you be revisiting these themes in your next novel?

I think I’ve done my cathartic grieving through writing thing now. I’m on sweetness and light now. My next novel will be an out-and-out quirky comedy romance thing that celebrates life and love. With a few willy jokes thrown in for good measure.

Q. You spend quite a bit of time engaging on social media. Do you think it’s an important medium for writers? And how do you juggle those different (often conflicting) personae of being a writer and being a writer promoting their book?

I don’t think it’s for everyone. It’s something you have to find your voice for and something you have to be able to dedicate a decent amount of time to. How it affects your career as a writer depends on your attitude to it. If you use it to start and contribute to conversations, be interesting and entertaining, it can be really important. I thought I knew how to juggle being a writer and being a writer promoting my book but recently it’s all been a powerhouse onslaught of self-promotion and I can barely engage with what people are actually talking about over their being an ear for me to bend with news of publication. I don’t love that. It makes me feel utterly disgusting, but hey-ho, apparently it’s necessary.

Q. When and where do you write?

I get up at 5.45am every weekday and write till 8am when I then go to work. I then write on my lunchbreak for an hour. I use Dropbox so I always have the latest draft of my work. It’s important to always have access to it and that’s why I don’t fetishise where I write, just when. I wrote the first draft of Meatspace on National Express coaches between Bristol and London at all hours of the day. Now, the new book, I write in the studio where I work as early as I can looking out over the water.

Q. What advice would you give to writers trying to get to grips with using social media and writing?

Find your voice. Be real and don’t be creepy and over familiar. Be funny and entertaining and interesting and current. Don’t Tweet like everyone’s watching. Don’t write statuses in the third person or in the first person plural. Don’t spam up people with your work. Like life, be the best you can be and let the rest of the world catch up.

Nikesh Shukla’s debut novel, Coconut Unlimited was shortlisted for the Costa First Novel Award 2010 and longlisted for the Desmond Elliott Prize 2011. In 2011, Nikesh co-wrote a non-fiction essay about the riots with Kieran Yates called Generation Vexed: What the Riots Don’t Tell Us About Our Nation’s

Youth. His short stories have featured in many places including Best British Short Stories 2013, The Sunday Times and on BBC Radio 4. He has written for the Guardian, Esquire and BBC2 and was writer in residence for BBC Asian Network and Royal Festival Hall. His Channel 4 Comedy Lab Kabadasses aired on E4 and Channel 4 in 2011.

He hosts The Subaltern podcast, the anti-panel discussion featuring conversations with writers about writing. He likes Spider-man comics. A lot.