Irfan Master and I have arranged to meet at The Curve, a recent addition to Leicester’s regeneration in the Cultural Quarter. We’re in Master’s hometown. This is where he grew up, worked as a librarian, before moving to London to take up a post at the National Literacy Trust. He’s returned home, a decade later, to a different city. It’s only natural then to begin by talking about home and transformation.

“The biggest change to the city since the late 1990’s which was often seen as dire and grim, is the Cultural Quarter – with cool places like the Phoenix and the Curve.” He points out that having access means more people are interested in arts and culture, and that raises aspirations.

He’s working on his second book now which has been a more thoughtful process. The pace of life in Leicester is much slower he tells me and he is readjusting, re-learning to not be someone who’s trying to get to someplace else in a hurry. If anything, the move home has brought with it, more time – to sit and write, and to think and develop ideas. “Now I have so much time I tend to sit and stare out the window for at least an hour before I start writing.”

He wrote his debut, A Beautiful Lie in several places, whilst working in London, in Leicester and in idyllic isolation in Morocco– having little or no access to the internet or a phone.  How then does he manage to write in a connected world? “It’s hugely problematic to stop yourself when you’re there.” He says about the internet, and I can empathise. But, he says, he’s always been very disciplined and doesn’t go online in the morning at all, sticking to a strict schedule of writing from 7am – 11 am, then manages with the “bother of emails and news.”

Irfan Master has had a life long commitment to words on a page, to reading and to books. He started writing aged just twelve, but kept it to himself, sensing it would not go down too well with his then sport savvy friends. He talks candidly about the pressures of fitting in, so much was about survival but he reached a cross roads in his life and it was a case of either books or prison. Although his mum was a voracious reader, books were a luxury – so unlike his protagonist Bilal, they were a scarcity in the family home. “We couldn’t afford to just buy books from a bookshop.” Libraries became a huge part of his reading adventures – dragging his mum, dad, uncle or whoever to take him to the library and read anything he could get his hands on.

His fondness for libraries is clear – they provided a safe haven, opening up, not only access but opportunity, to explore different worlds and have left him with a  passion for stories. It is not surprising then that he’s frustrated with library cuts and closures. “But I won’t say too much in this interview” he says, after ranting on about saving libraries.

His desire to put pen to paper started off with short raps he’d written for himself, influenced by rap artists, he later moved into tackling longer pieces. It was a natural progression for him. Captivated by the beauty and simplicity in his then (and now) favourite book, Iron Man by Ted Hudges he set about to write a story. “It’s difficult to write like that,” he says. Later he read poetry, everything from Seamus Heaney to Larkin to Benjamin Zephaniah and hopes to write a poetry collection in the future.

It took him twenty years to break away from being shy and to talk about his work – to talk about the fact that he writes. Like his protagonist Bilal – it’s this tendency to keep secrets which fills me with a little unease.

It’s the day after the Wimbledon final and so it feels very normal to be talking about sharing a similar fate of never quite bringing home the trophy. (Master was shortlisted for the Children’s Waterstone Prize, the Muslim Writers Awards, and the Branford Bose, amongst others but is yet to win a major award). “For a boy like me, from Leicester, to write a book, about partition and get it published and then longlisted and shortlisted for major awards – it’s absolutely mind boggling. I can’t believe it. It transcends any thoughts I had about the book’s success.”

“I’m writing because it’s important to me to tell the stories I want to tell. To represent my writing in the best possible way and awards help me to do that so it’s great.” 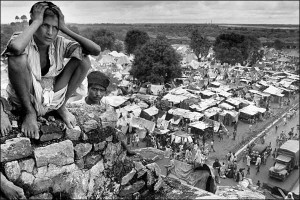 It was this image of Partition of India that inspired the book, A Beautiful Lie

So we talk about the story and the brutality of partition – to just draw a line in a map and destroy an ancient civilisation. The real tragedy of it all, he tells me, is that these two nations are now full of hatred for each other. Away from the harsh realities and violence, the uprooting of millions of people, lives destroyed, ultimately Master was keen to tell a story rather than write a certain kind of fiction. His desire to write “a story about humanity” means that his debut is accessible to readers of all ages – Master’s keen to make the point that his book isn’t just for children.

Before we know it, the hour has passed, and it’s time to part, it’s only natural then to be talking about home again and this sense of belonging that so many writers feel that they haven’t yet found. Master might be home, but he has lots of questions. “There’s a Portugese word, Saudade. There’s no word like it in other languages.” He explains what it means, and I understand it only after looking it up on Wikipedia.