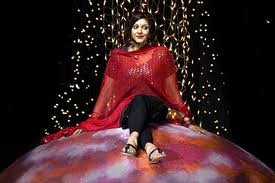 Audiences will step into India as soon as they enter through the doors of the Courtyard Theatre – with awnings and stalls, Indian music, and a large tree dominating the stage. Tom Piper, who is also working alongside the team designing Shakespeare: Staging the World – The BP Exhibition at the British Museum as part of the World Shakespeare Festival is documenting his design process for the show (including a visit to India).

Wolverhampton born actor Meera Syal makes her RSC debut with this production.  She is best known for her comedy,  radio and film – which includes Goodness Gracious Me and The Kumars at Number 42.  Meera can be seen in East is East writer, Ayub Khan-Din’s new film, All in Good Time, based on his popular play, Rafta Rafta.

Meera Syal said:  ‘Paul Bhattacharjee is a wonderful actor whom I’ve known for 20 years. We have only played opposite each other once before – in 1992 in a BBC film called My Sister Wife, which was also my first screenplay as a writer.  We played husband and wife then but with a far less happy ending than in Much Ado!’

The show is being directed by Iqbal Khan and the  Costume Designer is Delhi based Himani Dehlvi. The show runs in Stratford Upon Avon til September 15th, before transferring to London’s Noel Coward Theatre from September 22-October 27th.

Find out more by visiting the RSC.