What inspired this new piece of theatre?
When I first came to live in the UK in the late 1990’s, I noticed particularly South Asian women of the first generation of migrants wearing saris much like my mother and aunts would back home although with heavy winter coats and cardigans. The sari was not just for special occasions within the community context but very much a garment for the public space of everyday pursuits.
Slowly, I realised that the sari was now a rare sight in the high street or market stalls and is very much in the arena of special occasions, tradition and ritual.
As Rasa’s work is to explore the evolving and enduring migrant experience, I wanted to write about the way in which the sari impacts on the lives of the different generations. I’ve always found the sari a complicated garment stemming from my own migrant upbringing. It’s really about the “gaze” of patriarchy, of the status of women within South Asian culture and colonial gaze as well. The sari is a very resonant metaphor to examine more complex issues.

Q. What can audiences expect to see?
Those familiar with Rasa’s work will know that it will always be an eclectic, electric experience infused with humour and hopefully thought-provoking insights. They will see five characters all played by me from a 70 year old grandmother through to a transgender poet to a sari weaver to a Malaysian museum curator to a woman who gives birth in a war zone. The audience will be treated to some of the varied and unexpected ways in which the sari can impact a woman’s life.
This is the first part of what we are calling “THE SARI TRILOGY” so it focuses on the woman’s perspective. The second part will be set in a sari shop and feature the very male arena of sari retail and the battle between hand-loom and machine made saris. The third part will feature a sari musical. 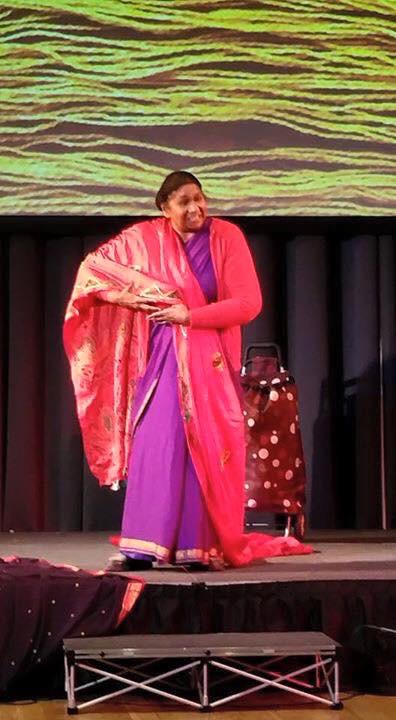 Q. Why do you think the sari holds significance in Indian culture?
A strip of cloth which has thousands of years of history is deeply embedded in Indian culture and iconography. It carries for women the weight of family honour, ritual and the whole moral framework on which we operate (at least psychologically). The sari is also an indication of status, caste, class and entitlement. It is a complicated garment for contemporary women who can feel uncomfortable with the air of mystery, the idea of the exoticised South Asian woman and the weight of expectation that the sari burdens them with. It’s always fascinated me.

Q. What age did you learn to wrap a sari. What are your earliest memories of wearing one?
I was eleven and going through the coming of age ritual. So menstruation and a very public celebration of that was my first introduction to the sari. Nothing glamorous, very tight and itchy. So the sari was accompanied by a lot of giggling cousins, proud but anxious parents and relatives who gave me gold just for this big “achievement”.Of course later in life I realised that this was a thousand year old ritual and marked the public introduction that girls are now ready for marriage. Of course being a writer that feeling stayed with me and I write about it.

Rani Moorthy has written for BBC 1 Doctors, BBC Radio 4 dramas and several short films, including Incense, funded by the Film Council, which premiered at Cannes Film Festival and televised on ITV. Her play Curry Tales was nominated for a MEN best Fringe production, had two national tours, toured internationally to 4 continents and broadcast on BBC Radio 4 and Too Close to Home was nominated as MEN best New Play award. States of Verbal Undress was a finalist in the live event category of Asian Media Awards. Her play Handful of Henna was translated into Italian and she has been commissioned to write a short play for the Milan Expo 2015.This is Rani’s eleventh play for Rasa.

The world premiere of Whose Sari Now? will take place at Curve, Leicester on November 12. A full UK tour will follow. Please visit Rasa Theatre for more information.