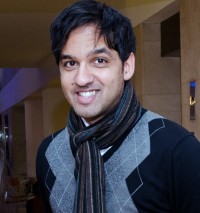 Q. Firstly, can you tell us a bit more about your theatre company and the ethos behind its formation.

MUJU began life as the Muslim & Jewish Youth Theatre project in 2004. I was interested in the project as I’ve always enjoyed performing and writing. There is something quite unique about the relationship between British Muslims and Jews. Both communities often live side by side – but remain quite separate somehow. And with events in the Middle East, separation can lead to mistrust. It occurred to me that I’m in my 20s, I live in London, and I don’t have a Jewish friend. The problem with not knowing people from other communities, is that you start to make assumptions especially if you rely on media narratives.

So we started to advertise the theatre project through community networks inviting performers to workshops at the Tricycle – we met every Wednesday night. And somehow it just grew. We had this great momentum. After 3 years, 3 plays and the first upSTARTS Festival in 2008, we established ourselves as a proper theatre company and a registered ourselves, and it was here that The MUJU Crew in its present shape was born.

Our ethos hasn’t really changed over the years. We’re about bringing people together through great quality art. Many inter-faith initiatives are about getting people to talk to each other. We start by doing and creating something together. We believe through working together friendships emerge and this creates a context of trust and understanding that allows for more open and sincere conversations.

I now have loads of Jewish friends haha!

Q. For your tenth year anniversary (congratulations!) you return to where it all began, at the Tricycle theatre. Tell us about the show you’re putting on.

Come In! Sit Down! is a musical sketch show about Muslims and Jews. It’s like a wild journey through crazy, comic and outrageous situations. The show is bold, and self-critical, but we also challenge stereotypes and points of hysteria. There’s also lots of heart-warming human dilemmas that we all share.

Q. What do you love about this particular show?

All the brilliant characters! You’ll meet the much loved Fatima and her 4 husbands, you’ll listen to the secret desires of our Imam-Rabbi rap duo, you might just bump into a home-sick Jihadi tired of life in ‘IS’ and craving East Enders, and you could get stopped by a few Israeli soldiers that have established a new security check-point in Brent Cross! There are many more but I don’t want to give too many away. The songs are also a real highlight. We have some brilliant composers and musicians working with us, Chris Cookson and Dave Cohen (BAFTA Award-winning Horrible Histories).

Q. And what will audiences take away from coming along?

The memory of a great night out I hope! And maybe in the days after a thought or two about some of the character or themes from the show. You might see something/ someone on stage that challenges your perceptions. Or makes you reassess. If we get people thinking at all – then we’ve done a good job!

Q. Writing humour isn’t easy and so many writers avoid doing so because of that. What excites you about working in the realms of comedy?

The line between humour and offence can be a fine one. On the whole we don’t do blasphemy. We’ll mock people & communities of a certain religion – but not the religion itself. Lines can get blurred and of course nothing is ever black or white. So I guess it just comes down to judgement. But comedy is a great device to explore difficult issues. It allows you to say things and take the audience with you to places you couldn’t go to with a dramatic piece. When audiences are laughing they tend to be more open and accepting.

Q. Are there rules to writing great comedy? Would you be willing to share some?

Draw on your own experiences – it will be more authentic. Have one question in mind that you want to address in each sketch. Start off with a recognisable set up. Surprise the audience with an unexpected journey. And end with a killer twist (that’s normally the punchline!). Don’t labour a joke. Keep it short & simple.

Q. As a director, what are the challenges of working with a writer?

As well as Co-Directing the show I have also been involved in the writing. And we have a brilliant sketch writer, Joel Soetendorp, who has been contributing some scripts. There are always challenges when you have lots of creative people in a room! It’s a melting pot of ideas. I’ve tried to be as humble as possible and go with the best ideas even if they aren’t my own. Of course ultimately it’s up to the directors to drive the overall vision of the piece. We have been quite lucky in that we’ve definitely had too many ideas, rather than too few. So the challenge has been deciding what to cut. And that’s never easy.

Q. Are you allowed to tell us about your Channel 4 Sketch show – we’re intrigued!

It was a pilot for Radio 4 (not channel 4 – haha I wish!). We’re still in conversation – so watch this space! (side note: oops! I got way excited there and read the press release as Ch4!)

Q. I love how you’re committed to building bridges tackling issues head on, and talking about subjects others might avoid. What keeps you motivated?

First and foremost, its always so much fun. I just love working with my crew and nothing beats seeing an artistic vision come to life on stage. On a more sombre note, there has been a detected rise in both Islamophobia and Anti-Semitism. The world is a pressure cooker, everyday we are confronted with images and narratives of conflict. With the world online at our finger tips rising tensions around the world (and in the Middle East in particular) directly impact on the relationships between Muslims, Jews and wider society in the UK. Mainstream media narratives tend to be soundbite, one dimensional and conflate the complexity, the nuance and the personal day to day experiences. I guess I am becoming increasingly aware that we cannot afford to let mainstream media define our understanding of each other.

Unfortunately, the need for groups like MUJU, and the type of dialogue they create, has only increased.

Q. Finally, what advice would you give to anyone trying to get their work on stage?

Think hard about what you want to say. Be brave and honest and don’t be afraid to explore difficult issues. Give the audience something to think about. But be sure to ‘show them’ and not ‘tell them’. No one likes being preached to. And then be prepared to work really hard! It’s taken us 10 years to get a fully programmed show running on the main stage at the Tricycle Theatre – so keep persevering!

Come In! Sit down! is on at Tricycle Theatre from 27 July til 3 August