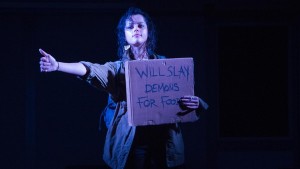 Kalki is a wild, exciting, mysterious , 15 year old girl. She is also, possibly, the 10th incarnation of the Hindu god Vishnu. But now she has gone missing and her two best friends – who had not met her until she appeared a week ago – must try and explain to the police exactly what happened and where she might have gone after the tumultuous, shocking events of the last seven days. Aditi Brennan Kapil’s extraordinary new play – part film noir, part graphic novel, The Chronicles of Kalki is being performed at Gate Theatre til the end of the month. The Asian Writer catches up with Aditi to find out more…

Q. Tell us what your latest project is about? Where did the inspiration come from?

When I first conceived the Displaced Hindu Gods Trilogy- 3 plays riffing on the 3 deities of the Hindu Trinity of Brahma (Creator), Vishnu (Sustainer), and Shiva (Destroyer) – I was looking for my way into the Indian part of my heritage, as a woman, as a person of mixed race, as an immigrant twice over, as a person who lives amidst an amazing diaspora that flies in the face of any attempt at stereotyping. I believe that all immigrants engage in an act of re-mythologizing, we need stories to understand ourselves, both individually and in the context of society. So my Displaced Hindu Gods are a creative departure from traditional depictions. In “The Chronicles of Kalki”, the final avatar of Vishnu (traditionally male) is a badass girl facing down the demons of high school and puberty- Vishnu the Sustainer for me became very much about what humans need in order to survive, and in this case specifically to survive puberty.

Q. With experimental work like this, what fears were running through your mind as you were going through the creative process?

I honestly don’t think of my work as that experimental, I just try to tell a good yarn, and I believe in the perfect marriage of form and content, so sometimes the form gets a bit interesting, but it’s not because I’m experimenting, it’s because that’s the perfect way to tell this particular story. I try to provoke ideas and discussion, I try to maybe shift the world under your feet a bit… maybe that’s what makes it experimental. I’ll readily own that I try to push the boundaries of what theatre traditionally is and does, because I think of theatre as a uniquely experiential art form and it’s a disservice to a live audience to offer them anything less than a live, electric experience. But I sometimes feel that the reason my work is considered experimental or edgy is that I put women and people of color at the center of my thrillers or romances or adventures or what have you, I tell universal stories through the lenses of people we’re accustomed to seeing as outsiders, and again that’s less an experiment than a purposeful counteraction of centuries of cultural programming. I actually think my plays are pretty accessible to a fairly broad audience, I’m a huge believer in entertainment.

Q. Tell us about the development of the piece, which I understand took place at Lark Play Development Center’s Winter Writers Retreat.

I did something called a Winter Writers Retreat at the Lark in NY, the challenge was to write a play in a week, just to press forward no matter how much you want to go back and tinker, to bring pages every evening to share with the other writers, and then go home and write more. It was kind of amazing, I’ve never written a play that fast before. It was pouring rain that week in NY, I was crashing with a friend, another playwright, Branden Jacobs-Jenkins, and I kept having these weird lucid dreams, I think at one point he caught me sleepwalking, which I don’t do generally, but by the end of the week this entire universe had come out of me, and the thing that’s really amazing is that while I didn’t really sleep, I also never lost the initial impulse that started the play. There’s a purity to how this particular one came out that I’ve never experienced before or since. It’s changed very little since that first draft, it pretty much came out whole.

Q. How has The Chronicles of Kalki been received by audiences, and has this differed from critics?

This particular play has developed a pretty awesome younger fan base. I actually find it really interesting when all 3 of the Displaced Hindu Gods plays are performed in repertory that people tend to have an instant favorite, and it’s spread pretty equally between the 3 plays in terms of critical response and audience response, it’s like a bit of a rorschach test. Audiences tend to have a blast at this show, but this is actually the first time that The Chronicles of Kalki is being performed independently of her sister plays, so I’ll be curious to see how she fares on her own in terms of critical response.

Q. What did you enjoy the most from seeing the production come to life? What would you do differently if you had the chance?

Man, I love watching actors kill it, it’s my favorite thing in the world. There’s nothing like watching fearless actors devour your material and then spit out the bones.

I don’t know what I would have done differently, maybe been around for more of rehearsals? But coming for just the final week was my own choice, I have 3 kids so I try to limit my time away from home, so in the end I guess I wouldn’t have done that differently.

The Chronicles of Kalki runs til January 31 at Gate Theatre. You can book tickets here.

Aditi Brennan Kapil is a writer, actress, and director, of Bulgarian and Indian descent. Her play Love Person (Stavis Playwriting Award in 2009), a four-part love story in Sanskrit, ASL and English, was developed during a Many Voices residency at the Playwrights’ Center, and produced in a NNPN rolling world première at Mixed Blood Theatre (MN), Marin Theater (CA), and Phoenix Theatre (IN), in the 2007/08 season. Her play Agnes Under The Big Top, a tall tale was selected as a 2009 Distinguished New Play Development Project by the NEA New Play Development Program hosted by Arena Stage, and premièred at Mixed Blood Theatre and Long Wharf Theatre (CT) in 2011, and Borderlands Theater (AZ) in 2012 in a NNPN rolling world première. Her latest work, the Displaced Hindu Gods trilogy, consists of Brahman/i, a one-hijra stand-up comedy show, The Chronicles of Kalki, and Shiv. The plays, based on the Hindu trinity of Brahma, Vishnu, and Shiva, premièred in repertory at Mixed Blood Theatre in October 2013. She is the Mellon Playwright-in-Residence at Mixed Blood Theatre, an Artistic Associate at Park Square Theatre, and a Core Writer at the Playwrights’ Center in Minneapolis.