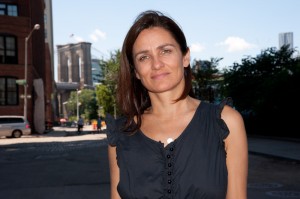 Q. Please could you tell us a little bit about yourself and how you started working on your first book?

I was born inBedford,England, to a Pakistani father and an English mother, the youngest of three children.  My father was in the RAF, and our family moved about a bit, but by the time I was three years old, we were mainly settled in this town where I grew up.

I’d been writing screenplays and had worked in documentaries at the BBC for many years, when I grew frustrated and decided to write the novel.  I had reached a juncture in my life; my husband and I moved toNew Yorkin 2005 with our two young daughters, and it seemed like an opportunity to dedicate my time to writing it.

Q. A Small Fortune is your debut novel. What were the challenges for you as a writer of writing a full length book?

The novel evolved over several years; it began as a short story, containing the germ of an idea that made me want to write a full length book.  The book went through many iterations, as I rewrote it.  One of the hardest things was honing down the points of views of multiple characters, to give the novel shape and structure.

Q. Your main character, Harris always seems to get it wrong, despite his best intentions. When he’s not planning to buy a house for his daughter, his loaning out money to family. What did you want to say about doing good – especially for the family?

Families are tough entities, impossible to fix; often the impulse to do good is thwarted.  Emotion intersects with responsibility; the desire to help fuses with the desire to be useful and needed, and that produces conflict. In the novel, I explore the complexities about doing the right thing in a family; how that ambivalence plays out, and its attendant pitfalls.

Q. Alia, your most conflicted character, in terms of identity and culture and being hopelessly lost about what she wants to do with her life, living a lie in London and yet is the only one who manages to bring everything and everyone together. In essence, she saves the day. Where did your inspiration come from when crafting her character, and is she based on anyone you know?

She saves the day, and indeed herself, by refusing to disengage with the family.  I drew upon some semi-autobiographical experiences growing up in my family, but Alia is essentially a fictional character.  I’m fascinated by characters who are adrift, slightly at the fringes of things, trying out different ways of being in the world; and Alia is all that, and more. Many 19 year olds lead compartmentalized lives; it’s an essential part of growing up, and forging an identity that is separate from your parents, and yet it’s often regarded as somehow aberrant.

Q. Did you write from what you know – and if so, how did you weave your own experiences into your first novel?

I did.  The main character is strongly inspired by my father, and a trip we took toPakistantogether, many years ago in the 1980’s.  There are several other major and minor characters in the novel drawn from real life; and probably an equal number created from imagination and research.   The novel had a long gestation period, during which some of my own experiences and observations accreted and mulched down and found their way, in fictional form, into the novel.

Q. Going back to your story, the plot flits between the lives of Alia, Harris and Rashid (though not proportionately by any means). They share a common trait in that they are all a bit lost and are striving to become better people. What did you want your readers to be left with by sharing this journey of betterment with them?

I wanted my readers to feel a sense of empathy with these characters’ humanity, their foibles and moments of despair and longing.

Q. How did your earlier experiences in your career influence your work? Who would you cite as your key influences?

I wrote screenplays TV scripts, and also a stage play, before I turned to writing short stories, one of which eventually became A Small Fortune.  The novel encompasses a wide spectrum of locations, and lots of different types of dialogue, and I think that having written scripts has definitely influenced the novel in that way. I think also the freedom to write prose after writing screenplays that got stuck in development, was very liberating for me.

As for key influences: a deceptively simple question.  We’ve talked about family, and I would have to admit that it all begins there for me. My parents and their experiences, and the way this has refracted my view of other people’s families, and how relationships twist and turn through generations.

My English teacher introduced me to Thomas Hardy and EM Forster.  I worked with Nick Fraser at the BBC, and he introduced me to V.S. Naipaul’s A House for Mr Biswas; my ideal book, in a way.  I discovered Jhumpa Lahiri’s writing through a friend inNew York–  she wasn’t that well known in theUKin the early 2000’s.  I also discovered the short story collection, In Other Rooms, Other Wonders, by Daniyal Mueenuddin since I moved toNew York.  It’s brilliant.

Q. First time writers often find the publishing process daunting. How did you go about finding an agent and publisher?

I had a TV agent in theUKalready, so I had some experience of the process. I finished a draft of the novel in 2008, and sent it to the agent Melanie Jackson inNew York, who recommended Zoe Pagnamenta.  Zoe’s British, but has lived inNew Yorkfor more than a decade where she set up her own agency a few years ago.  She took on my book, and sold it to Riverhead (an imprint of Penguin) in theUSA; herUKco-agent ,  Anna Webber, found a home for it at Quercus , in the summer of 2010.

Q. Your sub-plot deal’s with Rashid’s links with extremists, and examines how someone (fairly naive) could become involved with a terrorist organisation. You handled this with some sensitivity without really succumbing to this more accepted idea (or a possible misconception) that extremists become brainwashed. I’m not even sure Rashid ever knew what he was getting involved with. What were your hopes for Rashid when you were writing him?

Rashid is one of my favourite characters, though he was one of the hardest to create.  Hard, because I didn’t want him to follow an inevitable plot line that risked being clichéd. He’s a complicated character, who suffers burgeoning disorientation years after arrival; far away from his family inPakistan, he struggles to gain traction in a competitive culture that is ultimately alienating to him. I hope that readers find his journey both unexpected and sympathetic.

Q. Finally what advice would you give to anyone hoping to write a book?

Find a story that’s yours; not necessarily personal or autobiographical, but one that only you can tell.  Once you’ve written a decent draft, rewrite it and hone it; then find someone who isn’t a friend or relative, for feedback.  Try not to take criticism personally; use it to make your work better. Have patience and perseverance.  Writing a book takes a long time; there is rarely such a thing as overnight success.

Rosie Dastgir graduated fromOxfordwith a BA in English literature in 1988, and an MFA in film from New York Universityin 1993, where she studied as a Harkness Fellow.  Upon returning toLondon, she worked in BBC Documentaries for several years, followed by a stint at the European Script Fund, before turning to freelance script writing.

She is the author of several feature scripts, as well as pilots for TV.  Her stage play, Bevan’s Baby, a fantastical docu-drama about the state of the National Health Service in Britain, was given a rehearsed reading, at the Soho Theatre in London. Since moving to Brooklyn, she shot a short digital film for a Pakistani rural women’s charity.  More recently, she completed A Monsoon Baby, a screenplay collaboration with the UK film and TV director,  Mark Brozel.

A Small Fortune is her first novel.