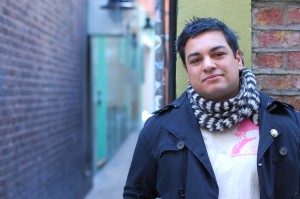 We’ve been here several times before discussing your writing. What’s happened since we last spoke?

Now, I actually have a book out, Coconut Unlimited. It’s out in October on Quartet Books. Since we last spoke, I’ve signed a book deal, started developing a sitcom for a TV channel, eaten my bodyweight in idlis, now I’ve learnt the recipe, and got rid of a sofa on Freecycle. It’s been quite a mad few months. I’ve also started playing football for the England Writer’s Team. Get me.

So tell us a bit more about your forthcoming novel, Coconut Unlimited?

Basically, it’s my take on The Inbetweeners. Three Asian kids in an all-white private school decide that they don’t fit in with their peers in the playground or at home in their Gujarati community, so to keep it real, set up a hip-hop band called Coconut Unlimited. Except none of them can rap. Much hilarity ensues. We kinda follow a school year in the life of their band as they try to hone their sound, get girls, dodge parents and learn the gangsta rap ways of the streets, all while maintaining their studies. I was really inspired reading ‘Sag Harbor’ by Colson Whitehead, one of the funniest books ever written. I realised that coming-of-age tales don’t have to be about dead bodies in quarries; they can be about whatever you want.

The book’s written in first person, how much of it is inspired your life?

A lot. The setting is the one I grew up in, characters are based on amalgamations/mash-ups/constructs of people I knew, small anecdotes that informed my teendom are sprinkled throughout. I tried to walk that line of how when you’re teenager, everything is super-important and upsetting and terrifying and amazing no matter how slight it is. The events that spin out of that familiar territory are a different story though. I wanted to base the story in a reality people could identify with and relate to and the most honest way of doing that was to plough and plunder my own school days, my own delusions of grandeur and my mum’s incredible hissy fits.

The book’s written in a easy to read, conversational style and this gives the reader a feeling that they are very much a fly on the wall of this protagonist’s life. What do you think it says about the British Asian experience?

I think it’s very true to the push/pull effect kids feel growing up between their environments at home and at school. Which one do you stray towards? Do your choices impact your friend-making-abilities? What happens if you don’t commit yourself fully to either environment, you end up lost, like Amit and Anand in the book, meaning that the band becomes the most important thing for them, over being good Indian kids and being cool school chums. I think, what it says about culture and community and how they mutate slowly around us and change is an honest depiction of British Asian life.

And can you explain the word “Coconut” and its implications?

‘Coconut’ means brown on the outside, white in the middle. It was an insult thrown at kids who weren’t desi enough for their desi peers, who appeared to like ‘gora’ things like Radiohead and beef and the arts. It was a pretty damning thing being called a coconut back in those days. Now (well, up until that recent news story in Bristol), it was thrown around with a bit more abandon. But in the book, these kids are trying to reclaim the word for themselves and question whether it’s a bad thing, whether usage of the word is worse that being what it means.

How did you find the process of finding an agent? And how did the publishing deal come about?

I found an agent on the back of the publishing deal. The deal came about when I met Gavin James Bower, my editor at Quartet, through live literature events. He’s an author in his own right and liked the book enough to take it to Quartet as an editor. So it all came about through endless readings,and live literature events and short story nights and something eventually gave. Then, once the deal was in place, I started looking for agents, and eventually found one.

So you recorded a song for this too. How do readers access the track?

We actually put together a mixtape for the book. So many rap songs are mentioned in the book and so many lyrics are spat by the protagonists, we thought it’d be fun to record the mixtape they talk about recording in the book. We teamed up with Mr Lingo and Sweatbox Sounds to record it . You can download it for free here (http://soundcloud.com/coconut-unlimited/coconut-unlimited-mix-vol-15-1). It contains writers, poets, actors, characters from the book, lyrics and tunes by Wu Tang, Gang Starr, KRS-One, loads more. Lots of the Golden Age of boom bap hip hop I grew up with. I felt that as a debut novelist, I needed to do something extra to help promote the book, and having tried my hand at music in the past, knew a bunch of people I could turn to for help.

Are you still blogging and doing the spoken word nights? How is that going for you now you’re a published writer?

Yep, not as much anymore (the blog) and all the time (the nights). I’m doing a bunch of libraries, live literature nights and bookshops in the run up to the book coming out, and then once that’s out, I can crack on with book 2, which has been marinating for a while and needs to cook. I find the time to blog harder now because so much creative energy is being poured into the book and getting it out there. It’s my first book and I want it to come out right. I do miss blogging about all the stupid stuff I get up to, though and hope to return to the disciplined recording of inaneness and mirth around me.

What’s the weirdest thing that’s happened to you since becoming a published writer?

I had a moment the other day when I realised I’d changed. Months ago, I’d complain that no one wanted to publish me and the industry was in a terrible state and no one wanted to take risks. Last week I was complaining about my agent and my publisher taking too long to iron out a minor sub-clause in a contract. That made me think, wow, I’m not in Kansas anymore.

What advice would you give to an aspiring writer?

Nikesh Shukla is a London-based author, filmmaker and poet. His writing has featured on BBC2, BBC Radio 1 and 4, and BBC Asian Network. He has performed at Royal Festival Hall, Book Club Boutique, Soho Theatre, The Big Chill, Rise Festival and Glastonbury. He is currently working on a sitcom for Channel 4. http://nikeshshukla.wordpress.com