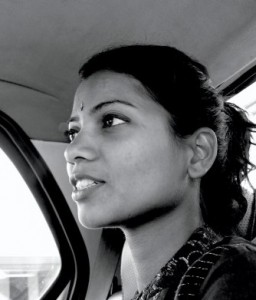 Q. Firstly congratulations on winning the Grassroutes commission. How did you go about producing a winning brief for the commission. What inspired you to create fiction based on conversations with strangers?

Thank you. Having recently moved to Leicester, I would chat to the locals about the city. It was while walking home after buying some chicken from the butcher that the idea struck me, for the forms the poems would take. I told him how to make a Tamil curry; he told me what sort of cleaver to get. Of course, the final poem is faithful to the spirit of the conversation, rather than its contents.

Q. The final sequence of poems, Five Voices, celebrates Leicester’s mix of characters and cultures. What struck you about the city when you first moved here?

What struck me almost immediately, and overwhelmingly, is that my husband and I belonged here. He is a white Londoner, and I’m a Madarasi. We stand out in India. Especially in the north. We went to look at the Taj Mahal in Agraand the locals looked at us. We were followed everywhere in Varanasi; up and down the ghat steps I was shouted to: ‘Are you Indian?’ Even shrinking housewives under goongats guffawed. In Lancaster, where we lived for a few months, Harry got looks for being a poncey Londoner. In Leicester, we ‘blend’ in perfectly.

Q. How did you first know that you were a writer and what was the first thing you wrote?

When I was sixteen, a girl in my class told me the English teacher told her I was a good writer. I used to write copious diaries like Adrian Mole. First thing I wrote that stands out is a poem called ‘Bloody Sunday Afternoon.’

Q. Besides writing poetry have you been working on anything else?

A contemporary novel in its second draft; a collection of Indian myths I’m retelling from the female point of view for my PhD at the University of Leicester.

Q. Please do tell us more about your first novel?

I can’t because I’ve sworn not to tell my husband anything about it till it’s ready for his beady eyes (we edit each other’s writing; he’s also a writer). And he will read this interview.

Q. Do you have an agent and will we have to wait much longer to see your work in print?

I haven’t got an agent. And you will have to wait only one day to read my work if you go on Amazon. I highly recommend my volume of poetry, ‘Sips That Make A Poison Woman’. Or you could order any of the collections of short stories that feature me ;-)

Q. Who would you say has had the most influence on your work? And who do you cite as your favourite contemporaries?

Mmm, offhand, T.S. Eliot, Arundhati Roy, Angela Carter (esp for my book of myths), and strange as it may seem, I adore Martin Amis. There’s a few Indian female poets whose books are impossible to get hold of, sitting in theUK. They are my favourite contemporaries. Also my husband is shaping up well.

Q. And what is your favourite read of all time and why?

I go back a lot to T.S.Eliot’s Preludes. It lets me slip into my own poetry. Favourite fiction changes constantly. I went back toRoyabout fifteen times. Now I’ve stopped. Saul Bellow’s ‘Henderson the Rain King’, I’m still going back to, since I read it twelve years ago.

Q. What sort of writer are you? Are you disciplined with a writing ritual? Do you venture out on writing days or do you lock yourself in a study somewhere?

I stay in one place. I like to write in bed. When I’m writing a novel draft, it’s a thousand words a day, really fast. Takes only an hour or two. If it’s a short story, a few hundred words a day at the start, finish with two or three thousand words in one sitting. At the moment there’s this great big armchair I like to curve into. Pyjamas are compulsory.

Write lots. I mean tens and thousands of words, without hope, without despair. Take what help you can get. Lie and cheat if necessary, in order to create space for writing. Get feedback. If no one has read your story, even if you have rewritten it a hundred times over ten years, it is still in its first draft.

Anita Sivakumaran is an author of both poetry and fiction. She was born in Madras, India, and has lived in the UK since 2004. Her first poetry collection, Sips That Make A Poison Woman, was published in 2011, after she won the Ravenglass Poetry Prize. The poet Graham Mort describes the collection as ‘having the force of parables’ and ‘glinting with dark humour’. She was a finalist for the 2011 Asham Award, and her short story Pandian Uncle And His Ghosts is published in the collection Something Was There by Virago. Her poem Dark Skin was longlisted for the 2011 Montreal International Poetry Prize. Ice And Ice Age is a poem published this year in the collection Out of Bounds: An Anthology of Black and Asian Poetry, from Bloodaxe. Recently, she won a commission to write a series of poems about multiethnic Leicester. Five Voices, Leicester will be exhibited at the Charles Wilson Library, University of Leicester, and the Leicester Central Library later this year. She will be reading her work at the Leicester Literary Festival on November 8th, 2012. Anita is currently working on a collection of stories reimagining patriarchal Indian myths from the female point of view for her PhD at the University of Leicester. She also has a contemporary novel in its second draft.