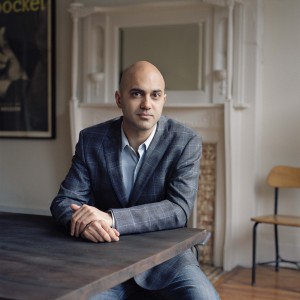 The unwritten rule to never discuss religion and politics in polite company is thrown out the window in Ayad Akhtar’s latest play Disgraced, which opens at Bush theatre tonight (May 17, 2013).

The play has attracted huge attention since it opened to audiences in the US last year and more so, since it won the 2013 Pulitzer Prize for Drama. It’s not surprising then, that the show nearly sold out of its original run in the UK, forcing the Bush theatre to extend dates into late June.

The action in Disgraced, centres on a dinner party, where Amir Kapoor, a corporate lawyer, is having an intimate dinner with his artist wife, Emily, and their friends. What starts off as a friendly conversation escalates into something far more damaging.

The inspiration for the play came from many different strands, Akhtar tells me: ‘There’s a wonderful American screenwriter who said “when two or three ideas for stories come together in one idea that’s when you have an idea for a story.”’ In 2006, Akhtar found himself at a dinner party and thought it would be an interesting setting for a play after he saw ‘how relationships were affected by a frank discussion by how people felt about Islam.’

So did Akhtar know that his idea was a good one and would be meaningful to audiences? ‘When I write I’m always trying to engage with something outside myself so there’s always the hope that the work is going to resonate more widely.’ He says, ‘ I certainly approached it in a way that would leave it open to being understood or at least appreciated by folks of all different sort of backgrounds. I wasn’t specifically writing for a Muslim audience.’  He says, he is always getting asked the question ‘Who does he really write for?’ and then answers: ‘I’m writing for that part of myself that is like the audience and that common human self.’

So how did Akhtar eventually find his voice as an artist? He says he has two answers. The first answer would be that it took him a process of twelve to fifteen years of being deluded about what it meant to write and what it meant to be a working writer. Then came a solid period of maturation and a bridge Akhtar crossed ‘from having one conception of art as self expression to art as a way of creatively engaging with the outside world.’ During this time he learnt that his own personal suffering wasn’t as interesting as the larger question of suffering. ‘It’s easy to lose the forest for the trees, especially when you’re a young writer.’ The second answer is that he’s still finding it.

I ask him about what he was doing during the decade he spent in self-denial. Was he procrastinating? ‘No. I wrote a lot in that period,’ he says, ‘I just wrote stories that had nothing to do with the issues I’m writing about now.’ Akhtar spent much of his youth reading European modernists and was influenced by the literary tradition he inherited from his teachers even though it had nothing to do with his own experiences. ‘I think I had some idea that writing universally was writing to this very specific Eurocentric vision of what literature is and how meaning is understood or is often assumed.’

His recent works (a novel American Dervish and film The War Within) deal with issues of Muslim identity in the West. Akhtar says he’s writing about ‘the challenges that the Muslim community goes through in terms of its relationship to a larger questions of assimilation and identity and immigration but also the matter of faith in the modern world.’ Akhtar is keen to assert that it’s not his job as an artist to provide answers or leave messages for his readers or audience even though this has left some people troubled about his work. ‘I work just as hard at undermining any potential meanings in my work as I do building those meanings.’ He wants to give his audiences an enriched experience and hopes they’ll come to watch compelling theatre and a night of good storytelling. I ask him about how audiences leave the theatre after watching Disgraced, ‘Deeply moved, very troubled often and unresolved.’ In New York he watched audiences leave the theatre, ‘arguing in the exact way that the characters did in the play.’

So what has his own personal experience been of living as an American Muslim in a post 9/11 world and has it made his job as an artist any easier? ‘My feeling is everyone has their cross to bear and everyone has the deck stacked against them in one way or another and the larger or more interesting story is how we get on with things and how we deal with them.’

What strikes me about Akhtar is his down to earth personality. He says things that I don’t expect him to say. He listens and answers in a way that tells me that he’s still thinking about the answer. He’s not figured it out yet, and I like that about him. I’m keen to talk about the Pulitzer, because it’s a huge accolade for someone who’s relatively unknown (until now). I ask Akhtar what the prize will mean for him and his artistic endeavours. Will it add pressure to do better?

‘God only knows,’ he laughs, ‘I hope I can internalise it so I can take bigger risks as an artist. The good news is more people are going to see the play and beyond that I put a lot of pressure on myself, and I have a lot to learn, I have a lot of growing up to do as an artist. So I’m grateful that it will allow me to work at my craft.’

Akhtar’s not afraid of mentioning the word failure, and does so when I ask him about his best work to date. ‘God knows, Farhana,’ he says endearingly. ‘From my perspective the work is always coming up short, so I’m just hoping I’ll have more chances to get it right, whatever it is.’ He quickly adds apologetically, ‘I’m not being falsely modest, I’m being honest, even if it doesn’t make a good answer, I’m sorry.’

I tell him there’s no need to apologise, that it’s a feeling many artists will resonate with, the notion of striving to do better. He pitches in: ‘Your work becomes an account of all the various failures, you know, and hopefully that failure is interesting to an audience that you can try again.’ Something tells me that Akhtar will have plenty of opportunity to do just that. He’s currently working on his second novel, and will be writing another play as well as making his directorial debut within the next two years.

I tell him, as a writer I’m going to take that all on board. ‘You have to,’ he says. ‘Because that’s the only way you’re going to get through it. I mean, Farhana it’s been twenty years I’ve been doing this, twenty years, and suddenly it’s like everybody knows who I am and it’s like I came out of nowhere, like I just started out or something. People have this idea that I just started doing this and I’m so successful – I’ve been doing this for twenty years and I’ve seen some very, very difficult times.’ He says it all, as if he’s convincing himself that it’s real. And now I feel like I’m talking to a friend; a friend who happens to have won one of the World’s greatest prizes ever and is giving me a life lesson.

‘…so perseverance,’ he continues. ‘This business, show business in general, is all about finding a way to stay in the game. How can you make yourself relevant? How can you continue to grow even though the opportunities are dwindling? At a certain point, if you keep putting in the hours, you keep learning how to do it better and growing in your craft, the tide is bound to shift and it’s interesting because everybody says that.’

Disgraced runs til 29 June at Bush Theatre. You can book tickets here.

The Asian Writer is organising a theatre trip and late lunch at Abu Zaad. If you’d like to attend please contact me on editor@theasianwriter.co.uk with theatre trip in the subject heading.