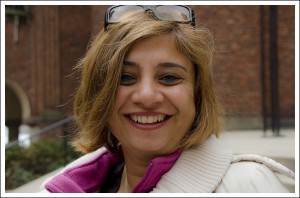 Q. Tell us about your latest collection, No Ocean Here, and what you think it says about you?

No Ocean Here bears moving accounts of women and girls in certain developing countries. The book raises concern, and chronicles the socio-cultural conditions of women in parts of Asia, Africa, and the Middle East. The stories, either based on personal interviews or inspired by true stories, are factual, visceral, haunting, and bold narratives, presented in the form of poems.

Junot Díaz said, “In order to write the book you want to write, in the end you have to become the person you need to become to write that book.” Writing No Ocean Here has changed me forever. It has encouraged and allowed me to explore the society we live in at unique levels and depths. It’s changed my vision of the world and helped me become more empathetic as a human being. Definitely made me a lot more emotional and enhanced my artistic temperament :) But writing the book has also given me a lot of strength and understanding of the world. Your personal issues become so much smaller on the scale of relevance when you hear stories about and from a survivor.

Q. It makes for emotional reading, as you chart through incredibly tragic stories, turning them into poems. It’s one of the most powerful collections I’ve come across in a while. What was going through your mind as you were crafting each poem?

First, thank you for the kind words. It means a lot coming from you. There were several, tangential thoughts racing through my mind as I crafted each poem. Right from the level of atrocities committed to the strength of survivors, a roller coaster of emotions consumed me. There was also the constant consciousness and fear to make sure I didn’t taint any of the stories with my opinion and vulnerabilities. I made sure that traces of original voice, from the stories collected, were visible in the poems. And I worked hard to stand on the periphery of the issues, looking in, but making sure the poems remained true to the stories. Along with the struggle to balance all of these factors, I had to get inside the mind of the victim, while creating and editing, and that was a hard job—fighting the darkness of my own project, so I could remain sane and optimistic.

The other thing that I wanted to make sure was that I wasn’t writing a “hate-book” targeted towards men. A woman being deprived of basic human rights isn’t acceptable. But it doesn’t translate into men being the sole villains as women too perpetuate crimes. The idea behind the book was sharing stories and creating awareness and not pointing fingers and throwing blame.

Q. Tell me about the women, who are at the heart of this collection. Where did you get the inspiration from to share their stories and how did you decide which issues to tackle?

Growing up across three extremely different cultures as a writer has made be observant, introspective, and sensitive to my surroundings. When I was a kid and my parents lived in Libya, I remember my Dad’s local colleague explain why his four wives sat in the back of the pick-up truck while the sheep rode up front with him. His philosophy was that women were more easily affordable and replaceable. I was seven when I heard that and it haunts me to date. That was probably the first time I closely understood the existing gender inequality & hypocrisy in the world.

Violence against anyone is heinous. But in my humble opinion, it’s almost always a personal story or experience that makes us obsessively devoted to a cause. The women in this collection are mostly people like you and me—educated, professional, from reasonably well-exposed, global families—in terms of background. I wanted stories that I could connect with on a deeper level, so I could do them justice. And the easiest way to do so was looking at the world around me. I started talking to friends and colleagues across different cultures and ethnicities and revisiting whatever experiences my subconscious and heart had quietly stored. I realized that everyone has dirty laundry at home. The process also made me realize that we often forget that being educated doesn’t mean a woman is empowered. And emotional abuse is just as ghastly as physical, if not worse.

The poem that’s most personal to me from this collection is “Ode to my aunt.” And in some ways, her story became the fuel for this book. My aunt was a domestic violence victim, in my eyes. It just so happens she died when she was my age and was also a poet. Sharing her story with the world helped me make sense of who she was and what she went through because I never got the chance to speak with her—she passed away before I was born. My father had saved her journal and I have been translating her poems and indirectly understanding her life.

Q. This notion that women wherever they may be, are still suffering is mortifying – and your collection epitomises a collective struggle for womanhood across the entire world. How did you go about confronting the various emotions that you were faced with, while producing this sort of material?

I have so much respect for the brave women who were willing to share their stories and become the source of strength for those who can’t voice their experiences. It was difficult staying grounded. The world felt unstable and cruel. And it was so easy to become a victim in the process of writing those poems. But unless I experienced their pain through words, I couldn’t write. Reliving those 43 poems over and over again made me so vulnerable. I am so grateful for the support structure I have in my life because it was these dear people who made sure I didn’t dwell too long in the well of darkness. Even though I am a happy person by nature, I am also sensitive and a poet. My heart rules my life.

Q. Do you feel that you’ve arrived as a poet?

I think it’s for my readers and audiences and publisher to answer that question. :) Definitely, the accolade this book has won does boost my confidence. One of the poems is now a part of an AIDS awareness film: “The Dawn.” Another is a part of a social justice campaign. It was ranked #6 on Amazon under Asian American poetry—Kindle section. The book and the journey it’s taken me on, have also reiterated my faith in hard work, honesty, patience, and integrity.

Q. I know you’re incredibly busy with your writing but have you had time to reflect on what you’ve achieved in this particular collection? When do you know it’s time to move on with a particular project?

Absolutely! After each phase (research, writing, editing) of every book, I take some time to pause and reflect upon lessons learned and mistakes to avoid the next time. Also, introspect if and how a book has changed me because as writers and poets, we do leave a part of ourselves inside our works. Writing this book has definitely made me a better person and an unafraid, unapologetic poet. It has also made me realize that I need to matter in my own life and take charge. As a woman and that too of South Asian ethnicity, culturally, I am trained to place my needs at the bottom of the totem pole. And, often, this martyr outlook is self-adopted and learnt through osmosis. No Ocean Here has definitely made me think about myself too.

With poetry it’s easier to know when it’s time to move on because I write around themes. And if I start to write multiple poems about the same sub-theme under the umbrella of one macro topic, it’s a sign that I am done and don’t have anything new to contribute. Might as well wrap-up the project. With fiction, it’s harder because the more time I spend with the characters, the more I get to know them. And the need to define and explain every nuance is so high. That’s when a good editor comes in handy :)

Q. What’s next for you as a writer and what can we expect to read from you in the near future?

My tenth book, a poetry collection tentatively titled, “Smoke in a Poet’s Heart,” will be out in 2014. I am very excited about it because the poems in the new collection are very different from my usual style that you’ve read. They are sarcastic, witty, ironic but still introspective and carry flavors of philosophy. Aside from that, I have several projects in the pipeline. Working on a documentary film. Novel #2 is out there in the world, finding itself a home. A collaborative poetry project with a NYC based poet needs to be completed this year, which is stressful but exciting. And novel #3 is in its 1st draft stage. I have a tendency to sign up for more than what I can chew, as you can probably tell, but it’s all good :)

Sweta Srivastava Vikram (www.swetavikram.com) is an award-winning writer, two times Pushcart Prize nominated-poet, novelist, author, essayist, columnist, and educator whose musings have translated into four chapbooks of poetry, two collaborative collections of poetry, a book-length collection of poetry, a novel, and a nonfiction book of prose and poems. Born in India, Sweta spent her formative years between India, North Africa, and the United States. Her work has appeared in several anthologies, literary journals, and online publications across seven countries in three continents. A graduate of Columbia University, she reads her work, teaches creative writing workshops, and gives talks at universities and schools across the globe. Sweta lives in New York City with her husband. You can follow her on Twitter (@ssvik) or Facebook (http://www.facebook.com/Words.By.Sweta).