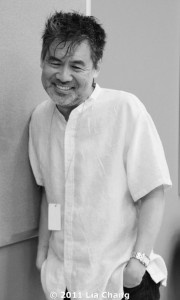 David Henry Hwang’s Obie Award-winning Pulitzer prize finalist play Yellow Face will run for four weeks in the purpose built brand new state-of-the-art theatre in North London.  Designed by David Hughes’ Architects, the theatre opened its doors for the first time earlier this month . In Yellow Face, art imitates life to great and amusing effect in a play which tackles the issues of identity and race whilst still managing to be hilarious. David Henry Hwang casts himself as the main protagonist, ‘DHH’. After becoming the ‘public face of the opposition’ in the Miss Saigon debacle, DHH later becomes embroiled in his own casting drama when he mistakenly chooses a Caucasian actor (Marcus), for the lead Asian role of his own play, Face Value.

The Asian Writer caught up with DHH for a minute to talk about Yellow Face:
Q. What inspired the story behind Yellow Face?
Yellow Face really began in the early 1990’s, with the fracas around the casting of Jonathan Pryce as the Eurasian pimp in Miss Saigon. That incident so unsettled me, that I decided to write a comedy of mistaken racial identity, to explore the question, “What does it really mean to ‘play’ another race — onstage, or even in life?” The resulting play, Face Value, became the biggest flop of my career (to date), but I continued to think the idea of such a comedy was a good one. Almost 15 years later, I revisited that concept in a mockumentary form, by writing Yellow Face.
Q. Yellow Face is a satirical play that tackles some real truths and questions about race and who we are. How did you know how to get the balance right between humour and dealing with the issues that you wanted to bring to light.
That was a tricky balance to find, which is probably why I rewrote the play so much between first draft and its New York opening! Basically, though, as in any play, the best principle turned out to be: follow the story. Whenever I stuck to the story, and discarded anything like polemic, the play got better.
Q. What do you want people to take away after watching Yellow Face?
I hope people laugh a lot, and that the humor opens them up to thinking about the complexity and difficulty of trying to create multicultural societies. In this process, mistakes will be made — which is inevitable, and okay. In this play, no one makes more mistakes than my character.
Q. You’re no stranger to producing award winning plays. What do you think makes great theatre?
I think the greatest plays result from an artist going deep inside him- or herself, and creating something very personal. This process also results in some very bad plays, however. So if an artist doesn’t fail from time to time, s/he isn’t working hard enough.
Q. You’re putting this on at the new Park theatre. What do you make of the space?  Does it add or take anything away when you bring your show to a new location?
I love the new Park Theatre, and couldn’t be happier that they’re opening one of their spaces with Yellow Face. I actually arrived early at the theatre yesterday, and just sat around in the bar area without telling anyone I was there, soaking up the atmosphere. It’s a fantastic place to see a show, or just hang out! Since it’s been over 20 years since one of my plays was staged in London, I love being reintroduced to a new generation of London audiences, via a brand-new space.
David Henry Hwang was awarded the 1988 Tony, Drama Desk, Outer Critics, and John Gassner Awards for his Broadway debut, M. Butterfly, which was also a finalist for the Pulitzer Prize. His play Golden Child, which premiered at South Coast Repertory, received a 1998 Tony nomination and a 1997 OBIE Award. His new book for Rodgers & Hammerstein’s Flower Drum Song earned him his third Tony nomination in 2003.Yellow Face won a 2008 OBIE Award for Playwriting and was a finalist for the Pulitzer Prize. His most recent work, Chinglish, won a 2011 Chicago Jeff Award before moving to Broadway, where it received a 2012 Drama Desk Nomination.
Yellow Face opens at Park Theatre 21st May and runs til 16th June
There will also be a Pre-Matinee Q&A on 25 May with David Henry Hwang 12:00-13.30pm in Park 200.