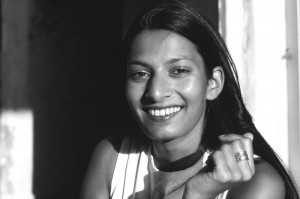 Firstly I have to congratulate you on your second novel. Your style’s grown and developed and you’ve tackled some really difficult issues with The Obscure Logic of the Heart. Can you talk us through what was different, in a writing sense, second time around?

The satisfactions and struggles of the creative process were identical to those I experienced the first time around: the urge to write a great and lasting story was accompanied by the exact same doubts about failure. The writing itself was easier in some technical respects because of things that I’d become aware of while editing the first book.

The deep entanglement of a corrupt government and illegal arms trade juxtaposed the lovers’ own dilemmas was a powerful way to weave the story. I really felt like I was being educated the whole time I was reading. What inspired you to explore this in your novel and what research went in to make the plot plausible?

I always knew that the main character, Lina, would have a strong impulse to ‘save the world’, which would clash with the private realities of her own life. During the early stages of writing, the problem of piracy in the Indian Ocean, along the coast of Somalia, made lots of headlines. One particular incident, about a ship carrying arms, caught my attention because of Kenya’s alleged involvement in the procurement of those weapons. I began to read up about arms dealing, and was shocked by the scale of the trade, especially the illegal aspect of it. I immediately felt that I wanted to support all efforts to curb this trade and make it more accountable, and the best way for me to do that was through my writing. I am now also a supporter of the Control Arms Campaign, a global civil society alliance campaigning for an Arms Trade Treaty that will protect lives.

The novel didn’t always make for comfortable reading, its clever challenging writing – did you feel like writing the novel was a challenge? And if so, how did you overcome barriers to step away from your comfort zone?

As an atheist, the biggest challenge for me lay in sympathetically portraying a devout religious sensibility. I wanted to explore two different types of religious belief: the kind that is steadfast and inflexible, and the kind that is able to compromise and contradict itself.

Lina falls into the latter category. Despite being a committed Muslim, she does not pray regularly or follow Islamic dietary restrictions. She also wants to marry an agnostic man who comes from a Sikh family.

By contrast, her father, Shareef, lives by the rules and won’t budge for anyone, not even the daughter he loves most dearly. He is clear that ‘God has made laws for us to follow. You can’t say: I believe but I’m not going to do this or that. God and the laws are one.’ I started off feeling I could never get to grips with this kind of thinking.

It took a lot of thought, research and care to build Shareef’s character and life up to a point where his choices and actions began to appear logical, necessary and, above all, moving to me. I managed it partly by listening to and reading the words of different religious thinkers, like Tariq Ramadan. I used their tone and vocabulary as a starting point for the creation of Shareef. It was through finding the right language that I was able to appreciate Shareef’s commitment to his faith, which is the commitment of a decent man to an ideal.

I wouldn’t want to spoil the ending for our readers, but I have to ask, was there an alternative ending to this story when you were writing it or was the lovers fate sealed from the outset?

People seem to read the ending very differently. I wrote the last scene shortly after starting the book. Although it changed over subsequent drafts, the essence of it remained the same, and this confirmed my sense that it was inevitable, yet surprising, and also right.

At times I felt suffocated by the characters, especially Lina’s indecision, her need to please her parents, and the way her culture didn’t allow her to do what she wanted. But she was an anamoly. On the one hand her character was a jet setting human rights activist, on the other she was an emotional mess. As a writer, what fascinates you most about the contradictions of the human mind and soul?

All of us know what it is to desire different, sometimes opposing, things at the same time. Many modern Muslim women, like Lina, face a particularly excruciating version of this dilemma. There is so much drama latent in situations where one’s loyalties are severely tested. In his Nobel prize acceptance speech, William Faulkner spoke of “the problems of the human heart in conflict with itself which alone can make good writing because only that is worth writing about, worth the agony and the sweat.” I agree with this completely.

Are you going to be in the UK soon and when can we expect to read/see you again?

I will be appearing at some literary festivals across the UK in autumn 2010. Details will soon be listed on the Events page of my website: www.priyabasil.com

What advice would you give to second time authors?

The number of the attempt doesn’t matter, what counts is to keep on writing.

Priya Basil was born in London. She grew up in Kenya, and now lives in London and Berlin. Her second novel, The Obscure Logic of the Heart, was published in June 2010. Her first novel, Ishq & Mushq, was short-listed for several awards, including a Commonwealth Writers Prize. www.priyabasil.com