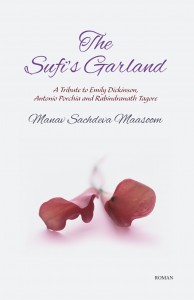 A new book of poetry is published this month to mark the 150th birth-anniversary of Rabindranath Tagore, India’s first Nobel Laureate.

The Sufi’s Garland is a Fakir’s weave of words in poetry. The stony hills of Afghanistan forms the backdrop of this sweet soulful music where the reader becomes a sojourner in a caravan, and the vagrant’s steering-wheel takes him to a painter’s studio to unfold the mysteries of life.

Snippets of verse share wisdom, stories of love and death and tales of the everyday. The book serves as a tribute to Emily Dickinson, Antonio Porchia and Rabindranath Tagore.

Manav Sachdeva Maasoom has been writing poetry since he was eleven. His first poem appeared in THE TRIBUNE when he was just twelve years old. A Columbia University graduate, Maasoom now lives in New York and works for the United Nations. This is his debut book.