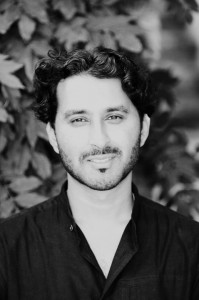 1) Would you please tell us about your book, A Beautiful Lie in no more than 50 words.

A Beautiful Lie is a story of a boy and the love he has for his father, at a time in India when everything was changing. It’s a story about the lengths a courageous boy is willing to go to in order to make sure his father dies happy regardless of the consequences for himself.

2) What research went into writing the book?

I read a lot of books about the period, but the main research was done when I traveled around India talking to people about Partition. These oral histories were so poignant and really fed into the tone of the story.

3) Tell us more about the novel writing process. How long did it take you to write the story and what was your writing ritual like, if you had one at all?

From beginning to end, the whole process took about eighteen months of framing, drafting, re-writing and editing. As for my writing ritual, I spent two months in Morocco in isolation, waking at dawn every day and writing until midday. I would then go for a long walk in the ancient medina of Fez and grab some lunch, returning in the late afternoon to go over what I’d written and make a few revisions. It was quite a monastic experience as I had no TV, no mobile phone and even more importantly, no access to internet. That really focuses the mind!

4) The central character Bilal might be a child but he seems very grown up and responsible and of course, ready to take on all the worries of the world. How did you tap into the voice and life of a thirteen year old? And was it an easy task?

There are a few thirteen year olds in my family, which helped, but some of the stories I collected from older men in India who had been thirteen at the time and had lived through Partition really helped me shape Bilal’s voice. I just started writing and once I had the first two words to begin the book, “Everybody lies”, the rest of the story began to unravel.

5) What inspired you to tell the story of the Partition from a child’s perspective for children?

When I was younger, I really wanted to read a story about this hugely important period in history, not only important for the Indians but also for the British. When I couldn’t find anything, I was quite frustrated. As I got older, a few ideas started to develop in my head after conversations with my grandfather who had lived through Partition. I began to ask young children if they knew what Partition was and what had happened. Most of them looked at me blankly, so I tentatively but with some determination, set out to write something that young people could relate to and understand.

6) Partition is something that affected everybody and yet it seems to be one of those things your parents just don’t bother to tell you about. How important do you think your story will be to teach a generation of children about what happened and more importantly how it affected ordinary people?

Another of the reasons I wanted to write this story was because the Indian and Pakistani communities never really speak of Partition. It was a terrible time and those that lived through the worst of it understandably are reluctant to revisit it. But, it did happen, and it affected millions of ordinary people, the effects of which we still feel today. My hope is that teachers read the book and use it as a resource so that a whole generation has the opportunity to become aware of the significance of Partition.

7) What do you hope people will take away from reading A Beautiful Lie?

An understanding of how difficult partition was for so many people who had lived in relative peace for generations. A sense of place and story but set in a larger historical context, and an empathy with the central character, Bilal and the burden he takes onto himself for the one thing that we can all relate to, love.

8) The book’s already been shortlisted for the Waterstone’s Children’s Book Prize. What was your reaction when you found out?

I rang my mum! I was astonished. This is my first book and for it to be nominated for such a major award is incredible. I just want people to read it and the nomination means more people will hear about the book and hopefully want to read it, so that’s amazing.

9)  What have you got planned for this year and what are your top three writing goals for 2011.

My plan is to visit lots of schools, libraries, festivals and work with lots of young people and budding writers – to encourage them to tell their stories, whatever they may be. As for writing goals, principally, I want to finish my next novel. The other remaining goals would be to make sure the story comes together in the way I want it to, and to tell a story that’s interesting, compelling and important. That’s probably amounts to more than three writing goals . . .

10) Finally what advice would you give to aspiring writers out there?

Read a lot. Read for the story first and if you enjoy it, then read for the language and you will see patterns emerging.  This will feed into your own writing. Keep a notebook and pencil on you at all times to scribble things down. Simple I know, but still very important. Watch people – on the bus, in the cafe on the street wherever, and write down little snippets they say – or don’t say. Make stories from these interactions, use them as your characters. Join a writer’s group if you can. There’s nothing like sharing your ideas and feeling inspired by other writers and their ideas. Finally, keep going – it’ll come.

Irfan Master is project manager of Reading the Game at the National Literacy Trust. He was born in Leicester. His family is from Gujarat, India  where his debut novel is set. A Beautiful Lie is an atmospheric, quirky and moving first novel.