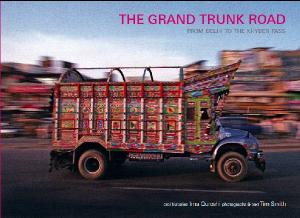 For millennia the Grand Trunk Road was used by invaders to conquer the subcontinent. After the British arrived in 17th century they used it as the main artery of their conquest and rule of northern areas of British India. Known locally as the ‘GT Road’ it was also used by its residents to begin journeys that ended all over the world, and from the days of the British Raj onwards large numbers of them have settled in Britain.

Between Delhi and the Khyber Pass the GT Road travels through the homelands of over 90% of British Pakistanis, as well as the vast majority of British Sikhs and Hindus from the Indian Punjab. Using personal stories gathered by Irna Qureshi and photographs and texts by Tim Smith this book tells – for the first time here – the story of the profound impact of the British on GT Road and its people, and how they in turn have irrevocably altered the fabric of modern day Britain.

Irna Qureshi is an anthropologist and oral historian specialising in British Asian and Muslim arts and heritage. She has collaborated on several exhibitions and books on this theme. Irna holds an MA in Social Anthropology from the School of Oriental and African Studies, University of London. Tim Smith is a freelance photojournalist who combines editorial and commercial work with exhibition and publishing projects. His main interests as a photographer and writer have been showcased in eleven books, many of which explore the links between Britain and people in other parts of the world. Dewi Lewis Publishing has a worldwide distribution network and is recognised as one of the leading photographic publishers in the world.