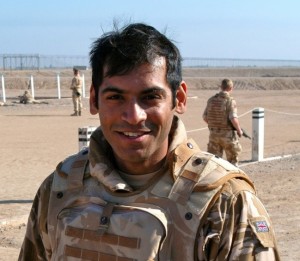 Adnan Sarwar, a 35-year old former British soldier who served in the Iraq War, has beaten more than 200 entrants to win the second Financial Times and Bodley Head non-fiction essay competition. His work, British Muslim Soldier, is a meditation on identity, dealing with why he, a Pakistani boy fromBurnley with no degree, decided to join the British army. It is a work of non-fiction with all the velocity of a gripping short story.

Caroline Daniel, FT Weekend editor and chairman of the six-strong judging panel, said: “The Bodley Head/FT Essay Prize is a truly global competition with entries fromBangaloretoSurrey. In an age remorselessly defined by Twitter, it was a relief – more importantly – a pleasure – to see so many young writers embracing the long-form essay. We look forward to bringing some of these new voices to our FT Weekend readers. Sarwar is a worthy winner.”

Stuart Williams, publishing director at The Bodley Head, said: “This was a bumper crop of essays, even stronger than last year’s, and proof that the essay is in rude health. They came from all over the world and cover a world of subjects – urgently, amusingly, inventively and expertly. We have a blistering winner that asks searching questions about cultural identity in an unforgettable voice and two outstanding runners-up.”

Adnan Sarwar is a former British soldier who served in the Iraq War.  After leaving he worked as a military consultant to film and television and is now a writer and actor based in London. You can read more of his work at http://adnansarwar.tumblr.com/